Hundreds Turned Out for Peaceful Protest in Punta Gorda 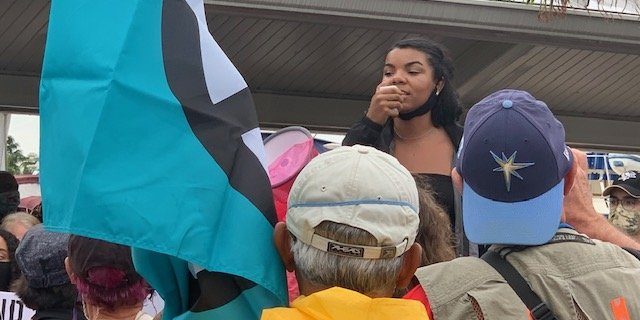 Carson McNamara, a student at Port Charlotte High School, led a peaceful protest in Punta Gorda on June 5, not unlike hundreds of others taking place across the country over the murder of George Floyd, Breonna Taylor and Ahmaud Arbery.

This spring has revealed, time and again, a racist violence still intertwined in the recesses of America’s institutions of law enforcement and criminal justice.

Protests are the highest form of patriotism, they are a way to say to our government we are here, and we will be heard.

America does not want to admit they have failed us. They would rather long-standing oppressive hierarchies remain. We cannot sit by and let the violence on our people continue. One protest is not enough We will not stop until every murderer behind a badge is prosecuted.”

Protests typically draw attention to needs, and then ideally other people become part of the movement. That remains to be seen for this and similar protests around the country. Yet history tells us that the most successful civil rights demonstrations have created change through incremental steps, building on one another to, at times, remake the U.S. political landscape.

Continuing our conversation about Racism
March 7, 2021