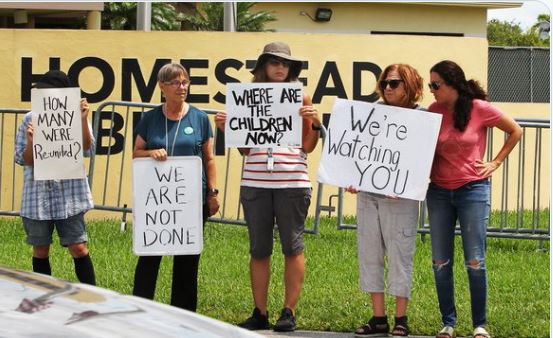 HOMESTEAD, FLA. (WSVN) – Local immigration advocates sounded off on a reported decision by the Biden administration to consider reopening a detention center in Homestead as a temporary shelter for undocumented children.

Speakers at a press conference held outside Homestead City Hall on Thursday expressed disbelief and disappointment after reports surfaced last week that White House officials could greenlight the reopening.

“It’s unheard of that we’re here again under a new administration,” said Melissa Taveras with the Florida Immigration Coalition.

Taveras said a detention center is hardly the only option for these immigrants.

“There are alternative solutions for these kids. They have family members, they have organizations like ours and churches, and other community leaders who are more than happy to be with them and stand with them as they complete their asylum process,” she said.

Before it was shut down in 2019, the facility was used for housing upwards of 1,000 unaccompanied migrant children at a time.

The center came under fire while it was open for its conditions.

“There have been numerous allegations of sexual abuse, of mistreatment of the children,” said Thomas Kennedy with United We Dream. “Reports and tours of the facility have shown that it was inadequate in housing.”

Back when Vice President Kamala Harris was a presidential candidate, she expressed criticism during a stop at the detention center.

“We’re all here because we know that we need to stand up for America,” she said.

Now immigration activists are hoping Harris will stand by her words.

It remains unclear whether or not the center, now called the Biscayne Influx Care Facility, will reopen.

“We had to expand and open additional facilities because there was not enough space in the existing facilities if we were to abide by COVID protocols,” she said.