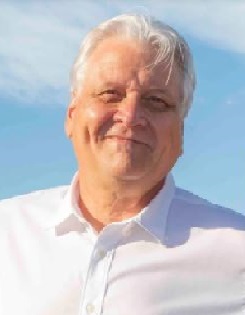 David and Patti Jones called Toledo, Ohio home for many years, where they raised five children. Their move to Charlotte County was to “live the dream”,  taking advantage of our beautiful beaches, their love of boating, and to provide a vacation destination for their children and grandchildren.

David grew up in Waterford, MI with one brother and two sisters. David says, “My best friend’s father was an attorney and the Township Treasurer and Commissioner. I believe he was my influence for community involvement.” As an adult, David was active in his Ohio community, from volunteering at food banks and environmental cleanup operations to coaching his kids in wrestling, soccer, football and baseball.

Like so many of us, he woke up the day after the 2016 election depressed and feeling helpless. It didn’t take long for him to decide he needed to get actively involved in an effort to “unseat a president who should have never been elected in the first place.” He and Patti decided to seek out like-minded Charlotte County citizens. Joining the Englewood Indivisibles was the beginning. Shortly thereafter, they joined the Charlotte County Democrats (CC Dems). According to David, “The CC Dems provided the opportunity for me to support an issue for which I’m passionate—protecting the environment.” As one of the first members of the Englewood Dems, he served as Treasurer and became a member of the Charlotte County Environmental Democratic Caucus.

By 2019, David was chairing the Florida Democratic Environmental Caucus Endorsement Committee. In early 2020, he was elected President of the Englewood Democratic Club, then added Precinct Captain for the CC Dems to his resume. It was while knocking on doors as Precinct Captain, meeting hundreds of residents and listening to their concerns, that he decided he could best serve the community by running for the Florida House of Representatives, representing Charlotte County House District 75.

According to David, “With the COVID pandemic, our constituents want and desperately need reduced prescription drug costs and I believe this effort should be accomplished at the state level. And, of course, with an older population, there is understandable concern with the dependability of Social Security and Medicare.”

“So many citizens are worried about their overall quality of life in Southwest Florida, particularly with the environmental damage to our waterways and beaches. They understand that if we don’t protect our environment, it will create an undesirable place to live or visit.”

David believes he has a deep understanding of what residents want, and if elected to the Florida House of Representatives, his platform will be to fight for:

David says, “The environment is my passion. When nitrates and phosphates in fertilizers combine at a 16:1 level in our freshwater systems, we start to see blue-green algae. This ratio also helps feed red tide, which devastates our health and local economy.”

Continuing, David says, “We must reverse the effects of phosphate mining, nitrates, and carbons. My solution is a fertilizer tax with proceeds used to incentivize farmers, ranchers, golf courses, and homeowners to employ best practices to strengthen, not weaken, environmental rules and regulations.”

According to David, “Mosaic is the largest phosphate mining operator in the U.S., and they are currently trying to expand operations into DeSoto County. Mike Grant, my opponent, takes money from Mosaic. How can Grant vote against a bill that negatively impacts his financial supporters? We need a representative of the people in this district—not a representative of special interest groups.”

“In 2018,” David continues, “the Trump administration unveiled a proposal to permit drilling in most U.S. continental shelf waters, including oil and gas drilling off the coast of Florida. Within just weeks of this election, Trump conveniently says that he changed his mind. Can we trust this president? He supports big carbon-producing companies and, if re-elected, will undoubtedly reverse this decision again.”

“We need to stop the environmental damage allowed by the current administration. Florida is low-lying with rising seas. According to FEMA’s latest report, we were previously at 13’6″ above sea level and now we are at 12’4”. That’s 14 inches lower—evidence that global warming is affecting sea levels right here in our community.”

“I have stated previously”, said David, “that I will not accept any contributions from companies that contribute to environmental injustice. In fact, I will be donating my salary back to the community.”

According to David, “I want to improve healthcare coverage and lower prescription drug costs. Expanding Medicaid was an outgrowth of the Affordable Care Act (ACA). Twenty-eight states receive a higher percentage of federal funding for Medicaid than Florida. Florida receives 62% while New Mexico, West Virginia, and Kentucky each receive almost 80% by taking federal money. Expanded Medicaid funding could improve health care coverage for 7,000 Charlotte County residents. We send money to Washington and we should receive our fair share, and I will fight for Florida residents.”

“My opponent accepts money from Bristol-Myers Squibb. Do you think he will vote for our citizens’ best interests in reducing prescription drug costs? I will not accept any contributions from big drug makers.”

“Two years ago, the Republican-controlled Florida Legislature, including Mr. Grant, committed to corporate tax refunds which will total $543 million. Even with the COVID pandemic, DeSantis intends to follow through on this tax break. According to David, “Corporations have been getting a break for many, many years. It’s really families and individual Floridians who really need the break now.”

Vote for David Jones to be your Florida State Representative for District 75. When he is in Tallahassee, he will be representing you, not special interests. To learn more about David’s position on the Environment, Healthcare, Quality of Life Issues, Education, Home Rule, and other issues, click here.