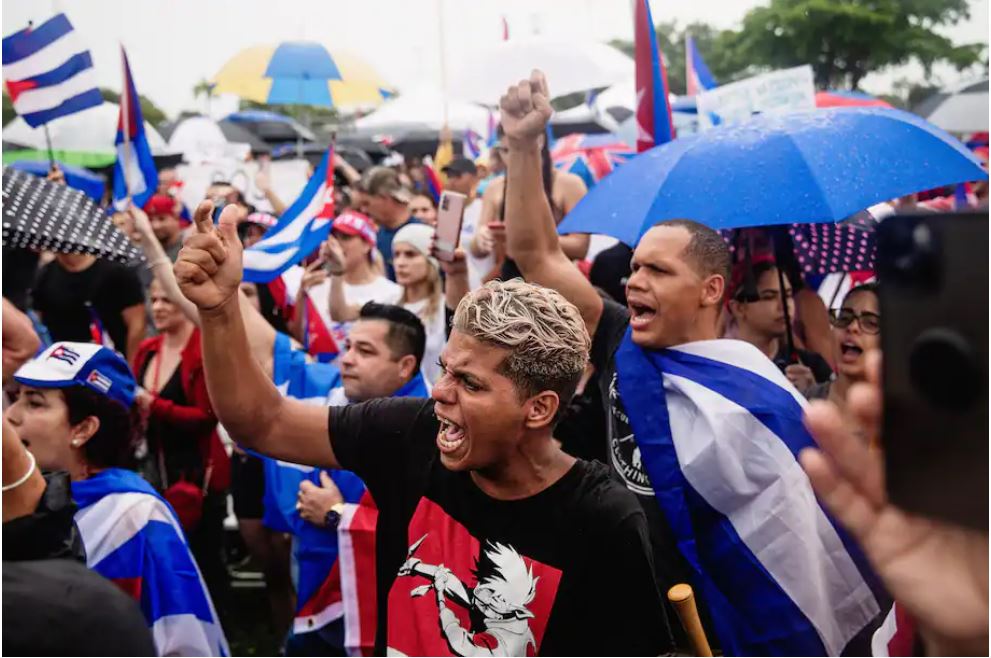 As protestors take to the streets in Cuba, defying a violent government crackdown, Americans across the political spectrum have a chance to break with old canards about the country. Progressives should understand that there is nothing remotely “progressive” about the thuggish, oppressive, neo-Stalinist government of Cuba. And conservatives should understand that six decades of embargoes, sanctions and unrelenting animosity have been an utter, dismal, counterproductive failure.

It is long past time to try something different: We need to tear down the metaphorical wall that bisects the Florida Straits and permit all manner of sustained engagement. Standing in solidarity with the Cuban people and supporting their aspirations would be much more terrifying to Cuban leader Miguel Díaz-Canel than any new punitive measures we might impose.

The protests that erupted Sunday in cities and towns across the island have no antecedent in the communist era. The nearest comparison was a violent demonstration that took place in central Havana in 1994, during what the regime calls the “special period” — the years, following the collapse of the Soviet Union, when generous subsidies from Moscow ended and Cuba suffered crippling shortages of just about everything, especially food.

Today, once again, there is widespread and desperate privation, due to the effects of the Covid-19 pandemic and a set of gratuitously cruel new sanctions imposed by the Trump administration. But Sunday’s protests were more numerous, more geographically dispersed and, most notably, were overtly political. One group of demonstrators even stood outside the headquarters of the Communist Party of Cuba and chanted: “Cuba is not yours!”

It is hard to overstate how much courage it took to challenge the regime so brazenly. The protesters knew they would surely face consequences that could include loss of employment, denial of housing, even years in prison. We should do what we can to ensure their sacrifice is not in vain.

I got to know Cuba in the early 2000s while making 10 extended trips there to research a book. Every time I went to the island, I felt more affection and admiration for the Cuban people — and a deeper loathing for the government that stunts and deforms their lives.

Yes, the regime under founding dictator Fidel Castro produced impressive gains in education, resulting in near-universal literacy. And the country trained a surplus of doctors and developed a health system that produces first-world results on indices such as infant mortality — though some of those statistics may be manipulated.

But with a few exceptions, the schools and hospitals I visited were crumbling. Much of the housing stock was crumbling, too, and horribly overcrowded. I admired the egalitarian ethos — the pride people felt in the fact that a highly trained medical doctor could live in a grim Soviet-style apartment complex next door to a garbage collector. But the elite “heroes of the revolution” I got to know, the famous athletes and musicians, lived in nice suburban-style houses and had permits allowing them to privately own cars, saving them the trouble of waiting hours for overcrowded buses that might or might not ever arrive. As George Orwell would have observed, some Cubans are more equal than others.

So how should the Biden administration proceed at this pivotal moment? First, it should do no harm. Like the Castro brothers before him, Díaz-Canel blames all of Cuba’s woes — and the “need” for censorship and other repressions — on the trade embargo and other hostile actions by the United States. Most of the anti-regime Cubans I know oppose the embargo, too. I fear that ratcheting up the pressure right now, as hard-liners advocate, would be more likely to inflame pro-government nationalist sentiment than to topple the regime.

Biden should make clear that the United States stands with the Cuban people, supports their yearning for freedom, and is ready to help with the coronavirus vaccines and food assistance. He should rescind the absurd Trump-era designation of Cuba as a state sponsor of terrorism, which it is not. And if pro-democracy groups in Cuba believe it is a good idea, he should look into providing the island with Internet access, which the regime limits — and this week cut off — as an instrument of control.

Longer-term, U.S. policy should be to end the travel and trade embargoes and flood Cuba with American tourists, entrepreneurs and ideas. Trying to starve the Cuban regime into submission hasn’t worked. Flooding it with freedom just might.

Image Credits: People cheer during a rally at Tamiami Park in Miami in support of the protests happening in Cuba on July 13. (Scott McIntyre/For The Washington Post)