It’s time to say it: We’re done with the vaccine refusers 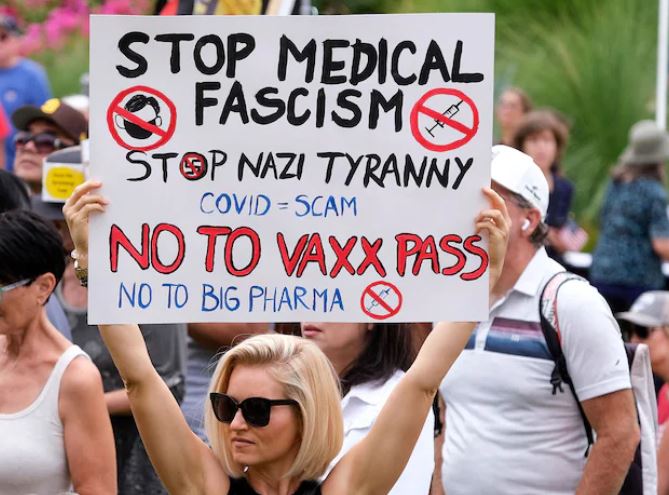 On Monday, the Food and Drug Administration granted full approval to the Pfizer-BioNTech vaccine for the coronavirus, and approvals for the Moderna and Johnson & Johnson vaccines could follow soon. This could be a significant step in convincing the millions of unvaccinated Americans to finally get vaccinated, even if it doesn’t quickly transform the state of the pandemic.

It’s also an opportunity for us to say to the hard-core vaccine refusers: We’re done with you.

We’ll treat you when you come to the hospital, of course, because that’s how medicine works; while doctors and nurses dealing with the wave of Covid-19 patients caused by the Delta variant might like to turn away anyone who refused to take a vaccine, they won’t. But it’s time to refocus our outreach efforts and our public and private pandemic policies so that accommodating, understanding and pandering to the refusers is no longer one of our chief concerns.

It remains to be seen how much of an effect the move from emergency-use authorization to full FDA approval will have on vaccination rates. What we know is that a lot of hesitant people said it would make a difference to them; in a recent Kaiser Family Foundation survey, 31 percent of the unvaccinated said they’d be more likely to take the vaccine if it had full FDA approval. It’s not that those people had a detailed understanding of the FDA approval process; more likely they’re just looking for additional reassurance.

And every little bit — carrots, sticks and even a dose of fear — helps. We’ve seen an increase in vaccinations in recent weeks as the Delta variant has plunged parts of the country back into the depths of the pandemic; for some people who may have previously thought we had this thing pretty much licked, the waves of infections and deaths pushed them to action.

FDA approval will also probably convince more companies to begin demanding that their employees be vaccinated. All of this, we can hope, will create an atmosphere in which being unvaccinated by choice will mean voluntarily marginalizing oneself from society. If you’re determined to make that statement about yourself, that you’re the kind of person to whom “freedom” means taking the chance of infecting other people with a virus that has killed millions, we’re going to do everything we can to isolate you.

To those who say “mocking those people will never convince them to take the vaccine!”, let me suggest that it’s too late to persuade them. I’m not talking about the hesitant and the uncertain — they can be persuaded, and we need to redouble efforts to reach them. But when you see that in Mississippi — which like many states with low vaccination rates is now being ravaged by the Delta variant — the state’s chief public health official felt compelled to make a public plea for people to stop drinking livestock dewormer, since a good number got the idea that it’s a treatment for Covid, you have to ask if there’s anything at all that would persuade committed refusers.

Actually, we know how they got the dewormer idea: the supercharged rumor-spreading machine known as social media. Over the weekend, Facebook reluctantly admitted that “an article raising concerns that the coronavirus vaccine could lead to death was the top performing link in the United States on its platform from January through March of this year.”

It’s gotten to the point where at a rally on Saturday in Alabama of his most loyal dead-enders, former president Donald Trump said that while he believes in everyone’s freedom, “I recommend: take the vaccines. I did it. It’s good. Take the vaccines,” and boos rang out.

I’m pretty sure that if between swigs of horse dewormer, your uncle is booing his god-king Donald Trump for saying a good word about vaccination, gentle persuasion isn’t going to have much effect on him.

Will one more anti-vax conservative talk radio host dying from Covid do the trick for him and his Facebook friends? How about another Republican governor contracting it? Don’t hold your breath.

Experts now say we’ll never reach true herd immunity; rather than Covid being eliminated, the pandemic will end with it becoming merely endemic, a part of our lives that never goes away but is suppressed to a level of infections and deaths we can tolerate, like other viruses.

In the shorter term, there is reason to believe that an accumulation of factors — FDA approval, the current wave of Covid deaths, more businesses requiring vaccinations, perhaps even simple fatigue after living with this for a year and a half — could convince more and more of the vaccine hesitant to overcome their doubts.

But just as the virus itself will always be with us, so will the adamant refusers. They’ll be trying out insane new treatments, while the rest of us shake our heads at people who’d rather gargle with turpentine (or whatever the next Facebook remedy is) than get a free lifesaving vaccine. They’ll keep engaging in unhinged and violent public behavior (like assaulting teachers over mask policies), for which they should just be arrested. Our only concern should be keeping ourselves safe from them; they deserve no more consideration than that.

They won’t disappear, but we can treat them like social pariahs. And if they don’t like it? They can go ahead and wallow in their fantasies of oppression and courageous independence. Nobody said “freedom” was free.