Kamala Harris is “for the people” 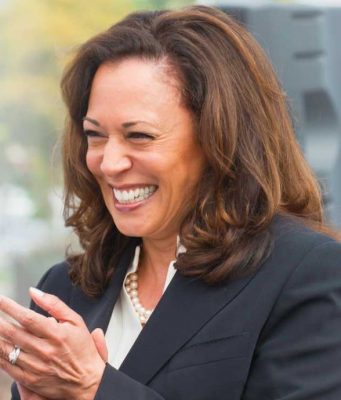 On Tuesday, many Democrats across the country heaved a collective sigh of relief when Joe Biden announced his excellent VP choice: Kamala D. Harris (D-CA). The first Black woman and the first South Asian woman on a major party ticket is a truly historic moment. The constituencies that Biden and Harris represent are wide and deep. The excitement is palpable. Harris’ former Alpha Kappa Alpha sorority sister, Carla Manning, said: “Words cannot say how excited I am and I continue to be excited about the possibility of the future and about what Kamala can offer to the country.”

Kamala Harris, 55, was born in Oakland CA to immigrant parents: a Jamaican father and an Indian mother. Her parents divorced when she was seven. Their mother, a civil rights activist and cancer researcher, then became the primary parent to her and younger sister Maya.  Recognizing that it was critical for her young daughters to understand their Black heritage, she raised Kamala and Maya to be proud Black women, as Harris describes in her autobiography, The Truths We Hold.

Harris graduated in 1986 from Howard University in Washington DC, a historically black college and university (HBCU), where she majored in political science and economics. While at Howard, she joined Alpha Kappa Alpha, a sorority formed in 1908 at Howard, which now has a powerful roster of 300,000 highly educated Black women. They are expected to provide their sister with considerable support (both money and muscle) in the election. She is married to Douglas Emhoff and is the Momala to Cole and Ella Emhoff.

Harris’ resume is well documented. She earned her law degree at the University of California Hastings College of the Law in San Francisco and, since then, has notched many “firsts”: first woman District Attorney in San Francisco; first Black, first woman, and first Asian Attorney General in California; and, now, the first Black woman and first Asian woman on a US presidential ticket. She is only the second Black woman to serve in the US Senate.

Her megawatt smile belies her toughness and tenacity. Her prosecutorial chops were widely viewed when she skewered Attorney General William Barr and Justice Brett Kavanaugh in hearings on Capitol Hill. While Harris and Biden have had their share of disagreements (especially on racial issues such as busing and on Biden’s 1994 crime bill, which resulted in the mass incarceration of Black men), Biden understands that he needs a VP who will tell him the truth, even when it stings. Her political inclinations are slightly left of Biden’s, but she is a pragmatist, just like him.

A major plus: Kamala Harris is as ready as anyone to be President. This is critical since Biden will have turned 78-years-old by inauguration. As a prosecutor and an AG, she has a strong law enforcement background. As a Black woman, she has a deep understanding of the complexity of law enforcement in communities of color. She may well be perfectly positioned to further the discussion on police reform, currently underway.

Trump’s 2016 national spokesperson, Kristina Pierson tweeted: “(Harris) … will abandon her own morals as well as try to bury her record as a prosecutor in order to appease anti-police extremists controlling the Democratic Party.”  This is a simplistic and inaccurate depiction of the complex relationship between the police and communities of color and a complete misrepresentation of the Democratic Party’s position. Further, it is contradictory to paint Harris as both soft and hard on crime.

Charlotte County’s own local book publisher, James Abraham, stated: “Although Black people have a documented history of unequal treatment at the hands of the criminal justice system, of which Harris was an agent, we want safe streets and good cops as much as the next person. More Black people than many think are for better policing and adjudication. Harris represents that way of thinking, which predominates in the Black community despite conservative White attempts to create a Black-versus-all-police scenario.”

2020 marks the 100th anniversary of the 19th Amendment granting women the right to vote. The role Black women have played in the Civil Rights and Voting Rights movements throughout our nation’s history has never received the credit due.  Kamala Harris’ candidacy provides an opportunity to recognize and celebrate their vital contributions. Be prepared though; she is a strong, Black woman. These two facts will bring out the worst in some racists and misogynists.  She is prepared to confront these dinosaurs and make them extinct forever as our Vice President.  Contribute here to help us elect the Biden-Harris ticket on November 3, 2020.