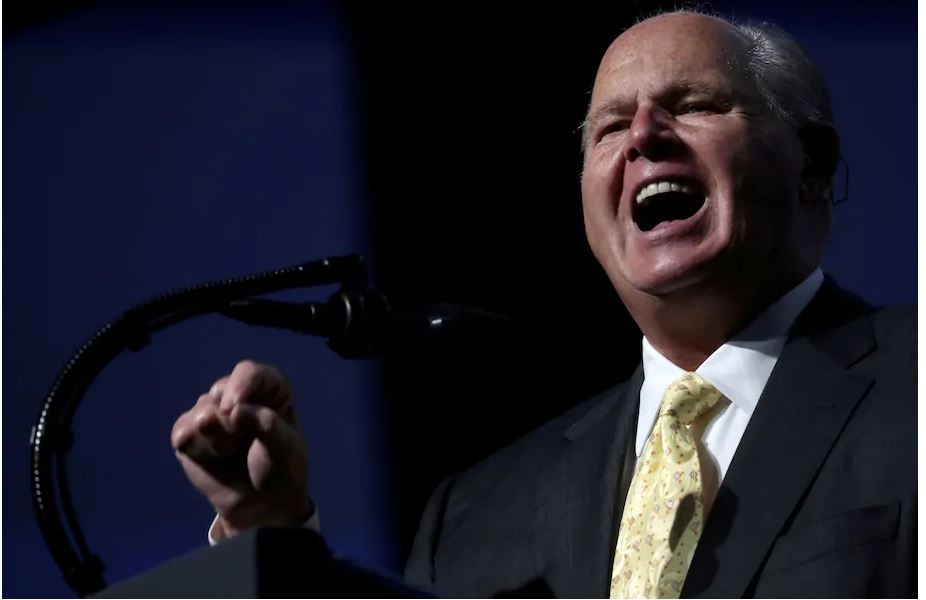 Editor’s note: And in Florida, Governor Ron DeSantis has said flags in the state will fly at half-staff for Rush Limbaugh.

“So for Colbert King to say, ‘Rush Limbaugh, his biggest concern was Republicans should do nothing to help [Barack] Obama.’ Damn right. Damn right. Helping Obama hurts the country.”

What had set Rush Limbaugh off? I had noted during Gordon Peterson’s “Inside Washington” talk show on ABC7 that anti-Obama sentiment was behind some of the difficulty in getting anything done in Washington. Referring to President Barack Obama’s active role in ending the showdown over raising the debt ceiling, I had said that the arch-conservative radio host made “no reference to saving the country, no such reference to averting disaster with the debt ceiling. It was a question of helping or hurting Obama.”

And Limbaugh agreed wholeheartedly. After all, it was nothing new for him. As I wrote at the time, four days prior to Obama’s inauguration, Limbaugh famously declared: “I hope he fails.”

Well, Obama didn’t fail in his two terms as president.

But neither did Limbaugh fall short in his larger effort to dominate the airwaves in a toxic style and fashion all his own.

He once introduced himself with a pomposity and self-aggrandizement that, to this day, takes the breath away: “This is Rush Limbaugh, the most dangerous man in America, with the largest hypothalamus in North America, serving humanity simply by opening my mouth, destined for my own wing in the Museum of American Broadcasting, executing everything I do flawlessly with zero mistakes, doing this show with half my brain tied behind my back just to make it fair, because I have talent on loan from God.”

There is never a good time for obfuscation, certainly not at the time of someone’s death. I can’t pretend to have found humor in the bombast that Limbaugh regularly unloaded upon all ideas and people he disliked. There was nothing comic in his cruel commentaries that degraded women, Blacks and gays.

Still, I pause to recognize Limbaugh’s passing Wednesday. He meant so much to the Republican Party and to the reactionaryism he helped to stoke within it. His was the world around which it seemed to revolve. His authority to judge went unchallenged. His opinions unquestioned. His greatness recognized by then-President Donald Trump, who, on the night of the 2020 State of the Union address, bestowed upon Limbaugh the nation’s highest civilian honor, the Presidential Medal of Freedom.

“He is the greatest fighter and winner that you will ever meet,” Trump proclaimed.

If so, whatever Limbaugh won was the country’s loss. His legacy lives on through the lives of conservative TV hosts Sean Hannity, Tucker Carlson, Laura Ingraham and so many others who daily and dutifully serve up the same measures of obnoxiousness that Limbaugh delivered through the microphone for decades.

Of course, that might depend upon what you think after hearing what has come out of his mouth.

● Telling a Black caller: “Take that bone out of your nose and call me back.”

● Saying on the air: “Have you ever noticed how all composite pictures of wanted criminals resemble Jesse Jackson?”

● Mocking the National Association for the Advancement of Colored People: “The NAACP should have riot rehearsal. They should get a liquor store and practice robberies.”

● Commenting on professional athletes competing at the highest levels of their sport: “You just gotta be who you are, and I think it’s time to get rid of this whole National Basketball Association. Call it the TBA, the Thug Basketball Association, and stop calling them teams. Call ’em gangs.”

● Commenting on women: “Feminism was established so as to allow unattractive women easier access to the mainstream of pop culture.”

● Commenting on gay people: “When a gay person turns his back on you, it is anything but an insult; it’s an invitation.” Limbaugh also equated the push to legalize gay marriage to a supposed “movement to normalize pedophilia” on the left. “What has happened to gay marriage?” he said. “It’s become normal. . . . Don’t pooh-pooh it.”

Voice of conservatism, moralistic patriot and courageous lion against liberalism? Or a demagogic and dominating [fill in the blank]?

“Winner” would not be my word of choice. Let’s leave it at that.