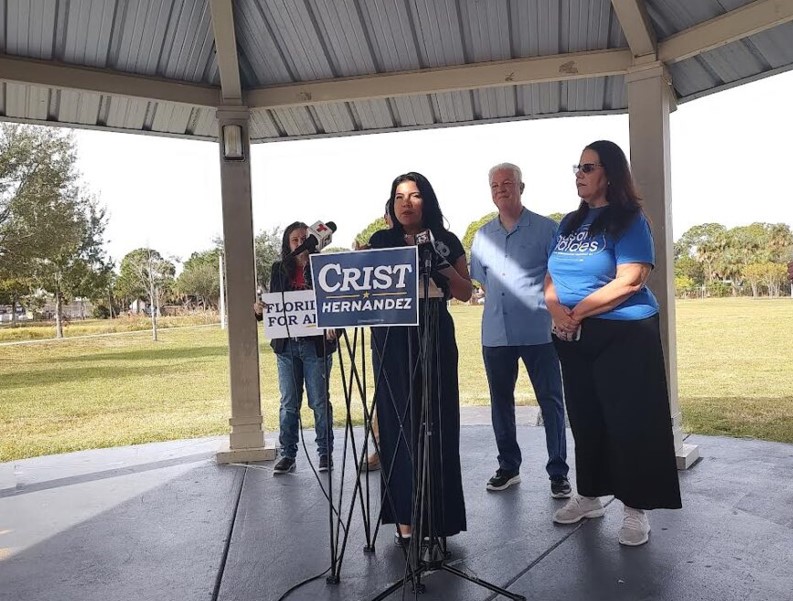 Karla Hernández, the Democratic candidate for lieutenant governor, made a quick campaign stop advocating for voters to get to the polls on Wednesday in Hillsborough County — a high-performing Democratic county.

More than 1.6 million Floridians have already voted, either by mail ballot or at early voting locations, according to the state’s Division of Elections website as of Wednesday morning. Election Day is Nov. 8.

Hernández, who has also gone by Karla Hernández-Mats, had been serving as the president of the United Teachers of Dade, the largest teachers union in the southeast, before she was chosen by Charlie Crist to serve as his running mate shortly after he won the Democratic nomination for governor in late August. Born and raised in Miami, she is the daughter of Honduran immigrants.

Speaking outside of a library in Town ‘n’ Country, an unincorporated part of Hillsborough County that has a large Hispanic population, Hernández played down a Telemundo/LX News poll released on Monday that showed Gov. Ron DeSantis leading Crist among Florida Hispanic voters.

“We really care about the people that are showing up at the polls,” she said. “That’s why this press conference is here because we want to motivate people and actually go vote, and not necessarily listen to what’s going on with the polls.” She added that she believes that DeSantis’ decision to airlift asylum seekers from Texas to Martha’s Vineyard will backfire with Latino voters.

And Hernández criticized the governor for creating an intimidating factor for some voters to go to the polls here in Florida.

“He wants us to fear going to the ballot box,” she said. “That is why his police came and they were arresting people right before the primaries, and of course, those cases got thrown out because we know that none of that was valid, and none of that was right, nor fair.”

Hernández was referring to the high-profile announcement DeSantis made in late August that his new election security office had charged 20 Florida residents with felonies connected to alleged voter fraud. Last week a Miami state judge threw out the case of one of those arrested, ruling that the statewide prosecutor didn’t have jurisdiction. The governor’s office said he will appeal the ruling.

Hernández also made the case for the Crist-Hernández ticket by referring to DeSantis’ refusal during Monday night’s debate with Crist to commit to serving a full four-year term if he’s re-elected next month, as speculation builds that he is preparing a presidential bid.

“We have a governor who can’t commit to being governor for the state of Florida for the next four years,” she said.

The governor’s re-election campaign did not immediately respond for comment.