McCarthy reveals the havoc the GOP will wreak with a majority 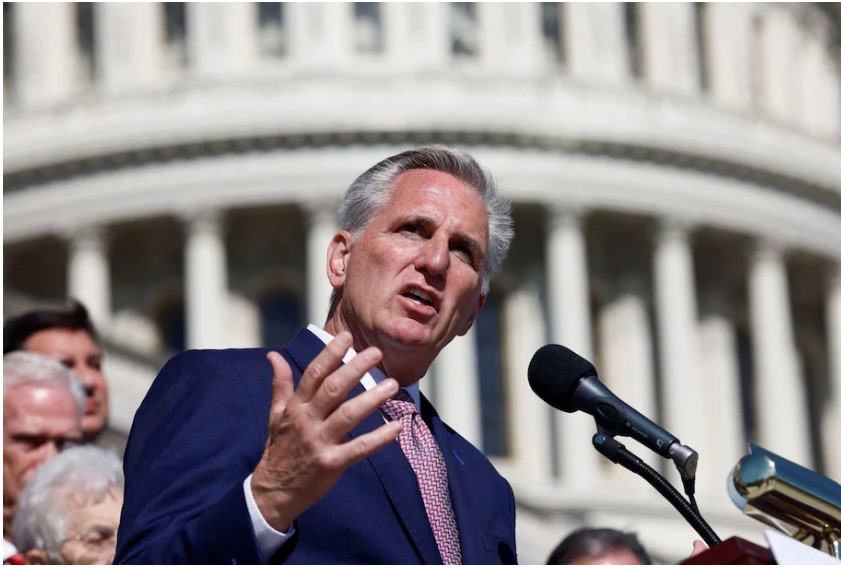 Editor’s comment:  Vote for Democrats to ensure this doesn’t happen, especially Val Demings for US Senate and Andrea Doria Kale of US House of Representatives.

Republicans have already indicated what they would do if they control one or both houses of Congress after the midterm elections. And it’s terrifying.

Of most concern is the resistance from House Minority Leader Kevin McCarthy (R-Calif.) toward additional military aid to Ukraine. He told Punchbowl News during a recent interview, “I think people are gonna be sitting in a recession, and they’re not going to write a blank check to Ukraine,” he said. “They just won’t do it.” He added, “Then there’s the things [the Biden administration] is not doing domestically. Not doing the border and people begin to weigh that. Ukraine is important, but at the same time it can’t be the only thing they do and it can’t be a blank check.”

Such a proclamation must be encouraging for Russian dictator Vladimir Putin, whose invasion strategy rests on the assumption that the will of Ukraine’s Western allies will weaken, allowing Russian forces to grind the neighboring nation into submission. President Biden has spent nearly a year showing that the West will not bend. Now, with McCarthy’s typical recklessness in indulging MAGA isolationists, he is offering hope to Putin that if the Russian leader sticks to his war plan — built on human rights atrocities and Iranian weaponry — he might prevail.

McCarthy’s comment will also likely shake European allies who worry about their own economic pain and fear that the United States might leave them dangling. It could also encourage Putin’s toadies in European capitals.

During the Cold War, buffoons who made similar Soviet-friendly comments earned the label “useful idiots.” It seems the Kremlin still counts on such people.

This is only one item on the MAGA crowd’s agenda. While many GOP candidates are trying to downplay or change their extreme views, it is clear there is widespread support for impeaching Biden, as Rep. Elise Stefanik (N.Y.), the No. 3 House Republican, recently reiterated. Others have proposed a nationwide abortion ban; repealing the Affordable Care Act and prescription drug cost-containment measures; and sunsetting entitlement programs such as Social Security and Medicare.

Plus, if the Senate goes Republican, you can forget about the confirmation of judges and executive branch appointees. Senate Minority Leader Mitch McConnell (Ky.) hasn’t hesitated to stymie past Democratic presidents. Even if he were inclined to be more reasonable (i.e., acknowledge an elected Democratic president should be able to govern), many in his party are willing to thwart virtually any of Biden’s appointments. And the Republican caucus would even more crazed if Herschel Walker, J.D. Vance, Blake Masters and the rest of the Trump-backed loonies win their Senate races.

Ah, you might say, Republicans would fail to push forward terrible policies, because they would draw presidential vetoes. But listen to what Republicans say they are prepared to do to get their way.

McCarthy is already refusing to “predetermine” what he might do in a face-off over the debt ceiling. And if he is willing to risk the full faith and credit of the United States in his battle to decimate the federal government, thereby plunging markets into chaos, then there is no question he’d be willing to shut down the government. (Republicans have already done this, in 2013 and 2018.)

Even if by some stroke of magic McCarthy were to develop some common sense, the rest of his caucus would likely run right over him to paralyze the government. Biden and Senate Democrats might be able to prevent Republicans from repealing every scrap of legislation passed in the last two years, but they cannot force them to sustain aid to Ukraine or act in the interest of a functional government. Voters need to be clear-eyed about what is in store if even one chamber goes to Republican control.

Some voters, no doubt, understand that the GOP’s agenda is radical, but want to grant Republicans power as a check against Democrats and expect others in the party to restrain the crazies. Such magical thinking forgets the lessons of the 2016 election: Many voters cast ballots for the narcissistic and clearly unfit Donald Trump, confident that other Republicans would “restrain” him if elected. It didn’t work out.

Voters who are willing to vote for Republicans because “they won’t accomplish anything anyway!” should consider how deeply the GOP can harm the country, our allies and global democracy. Indeed, they are not even waiting to be elected before wreaking havoc.