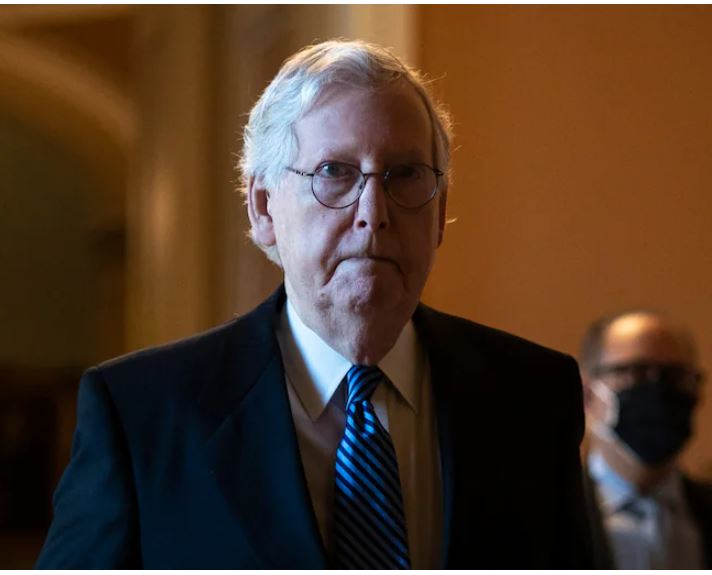 It has long been obvious that Mitch McConnell puts party before country, but this week he actually admitted it.

The Senate minority leader told Republican colleagues that they should oppose the creation of a Jan. 6 commission, no matter how it is structured, because it “could hurt the party’s midterm election message,” as Politico’s Burgess Everett reported.

And so, as early as Thursday, McConnell will use the filibuster to thwart a bipartisan effort to prevent further attacks on the U.S. government by domestic terrorists — because he thinks it’s good politics for Republicans.

“That is extremely frustrating and disturbing,” Sen. Joe Manchin (W.Va.), the Democrat working hardest to protect the minority’s filibuster rights, told reporters. “There’s a time when you rise above [politics], and I’m hoping that this would be the time that he would do that. I guess, from what I am hearing, he hasn’t.”

Manchin has every right to be disturbed. But he shouldn’t be surprised.

McConnell, asked this month about the ouster of Rep. Liz Cheney (R-Wyo.) from GOP leadership, and whether he was concerned that many Republicans believe Donald Trump’s election lie, replied, twice: “One hundred percent of my focus is on stopping this new administration.” True to his word, McConnell has blocked everything — even if it means undercutting Republican negotiators.

In addition to denouncing the Jan. 6 commission bill, negotiated by the ranking Republican on the House Homeland Security Committee, McConnell undercut Tim Scott (S.C.), the lone Black Republican in the Senate and McConnell’s designee to negotiate policing legislation. McConnell upended negotiations by announcing opposition to any bill that doesn’t preserve qualified immunity for police.

This week, McConnell disrupted progress on a broadly bipartisan bill designed to improve American technological competitiveness against China. Even though Senate Majority Leader Chuck Schumer (D-N.Y.) had followed “regular order” and allowed Republicans to amend the bill, McConnell threatened to filibuster the bill if Democrats didn’t slow the process further. On Monday, he demanded “a number of further votes on important amendments before there would be any attempt to shut off debate.”

Why? Because unrelenting obstruction is McConnell’s only way to placate the GOP base in the face of Trump’s attacks. The former president has called McConnell, among other things, a “dumb son of a bitch,” a “dour, sullen and unsmiling political hack,” “gutless and clueless,” “weak and pathetic,” a “stone-cold loser,” and a leader Republicans “should change.” The attacks must be rattling McConnell, for he has been unusually clumsy in his appeals to the Trumpian base.

He earned an extraordinary rebuke from the University of Louisville (the Kentuckian’s alma mater and home to the McConnell Center) when he declared that it was an “exotic notion” to believe that 1619 — the year in which slaves arrived in the American colonies — is among “the most important dates in American history.” Before that, McConnell threatened “serious consequences” for “woke” corporations that moved business from Georgia because of the state’s discriminatory new voting restrictions.

On the infrastructure bill, he and his Republican colleagues are using the same techniques they used to try to derail the Covid-relief legislation earlier this year: suggesting that Biden is a marionette manipulated by his staff. It’s just another way of planting the notion that Biden is mentally unfit.

In February, McConnell suggested that Biden was prevented by his staff from negotiating. “Our members who were in the meeting felt that the president seemed more interested in that than his staff did,” McConnell said. Republicans referred to Biden’s chief of staff, Ron Klain, as “Prime Minister Klain” and “the guy behind the curtain,” and they suggested that Biden had his wings clipped by economic adviser Brian Deese.

Now they’re suggesting that aides are manipulating Biden on infrastructure. Sen. John Thune (S.D.), the No. 2 GOP leader under McConnell, said Tuesday that the White House staff is “not as inclined to make a deal as the president is.”

And longtime McConnell adviser Josh Holmes claimed Tuesday that White House “staff treats Biden as though he’s an invalid who just wanders into a meeting and knows not what he speaks.”

Sen. Pat Toomey (R-Pa.) picked up the Biden-as-puppet theme Wednesday, suggesting Biden backed Republicans’ $1 trillion infrastructure proposal — until staff overruled him. “We went backwards very significantly when the staff came in with a much, much higher number than what I thought the president agreed to,” he said on CNBC.

The insulting implication that Biden is not in control, coming from his longtime Senate colleagues, would naturally anger Biden. So why try to undercut Biden in such a personal way? To poison the well as negotiators make a rare attempt at bipartisanship.

Maybe Manchin will be disturbed by this, too. He is still trying to negotiate on infrastructure, and to get 10 Republicans to support a Jan. 6 commission and the John Lewis Voting Rights Act. More power to him. But sooner or later, he’ll have to conclude that there’s no negotiating when McConnell has a 100 percent focus on obstruction.