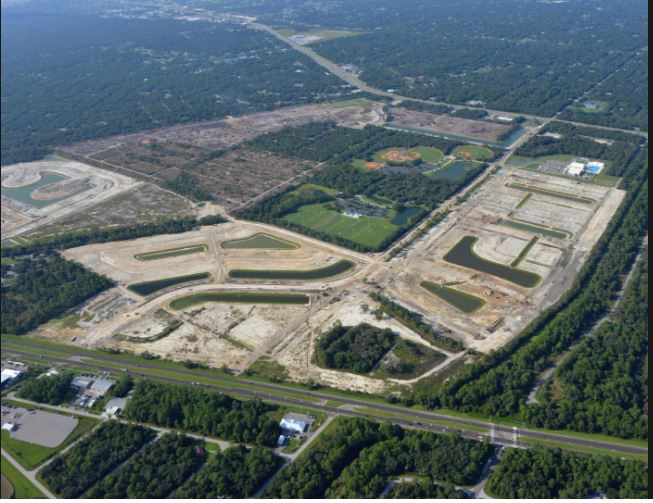 This aerial view of the planned community called West Port under development shows State Road 776/El Jobean Road at the bottom and U.S. 41 at the top. The Charlotte County Centennial Park is the green in the middle. The first model homes may go in the curved section in the middle left of the picture. The planned community of West Port’s northwest boundary is seen on the right of the picture. The land was a riot of trees for decades until the county finally sold the 435 acres to developers in 2019. Developers are nearing the stage of building model homes after months of clearing trees, building roads and laying water and sewer lines.

Model homes should start going in next week in the new West Port community following county approval of three subdivision layout plans there.

Charlotte County commissioners on Tuesday approved plans for the first 218 single-family lots in phase one of the recently named West Port planned community. This is the 435-acre site known as Murdock Village.

Lead developer KL West Port LLC, which includes Kolter Land Partners, said the first model homes will be in the section called The Isles, behind the county fairgrounds and near State Road 776. Cleared land directly along State Road 776 is zoned for commercial operations and some multi-family housing with no plans submitted yet.

None of the single-family home lots are located directly on the main highways that bound the site. While much of the site looks like a moonscape right now, the developers have planted stately palms and poured wide sidewalks along the newly renamed Centennial Boulevard off U.S. 41. It is not yet open to the public.

Other home building companies, including Lennar Homes, Maronda Homes and MI Homes, are developing other neighborhoods in West Port and these neighborhoods so far are called The Hammocks, The Shores and Cove. The sites stretch from State Road 776 to U.S.41, west of the canal by Flamingo Boulevard.

“Keep your fingers crossed, but if everything keeps on progressing as planned, models should be open this winter,” he said, promising more formal announcements of opening dates in January.

Access to the site is limited due to construction. Heavy equipment has scraped the landscape after the jungle of trees was burned. The developer is obligated by these first three site agreements with the county to spend nearly $6 million on water and sewer lines, roads, sidewalks and landscaping.

It was a big day for other large subdivisions, as well, before the board. They approved 214 lots on 126 acres next to West Port to be called Biscayne Landing. And on the other side of the county, Babcock Ranch got approval for another 340 single-family lots in two subdivisions on 10- and 49-acre sites near Lee County.

West Port is the first and largest chunk of Murdock Village that the county sold to developers after buying up the mostly undeveloped land about 17 years ago. Construction is moving forward as thousands of northerners daily are moving to Florida, mid-pandemic. The county recently closed a sale of a smaller site farther east that is slated to have a water park and a pedestrian-styled downtown. The third parcel between the two has yet to be marketed.