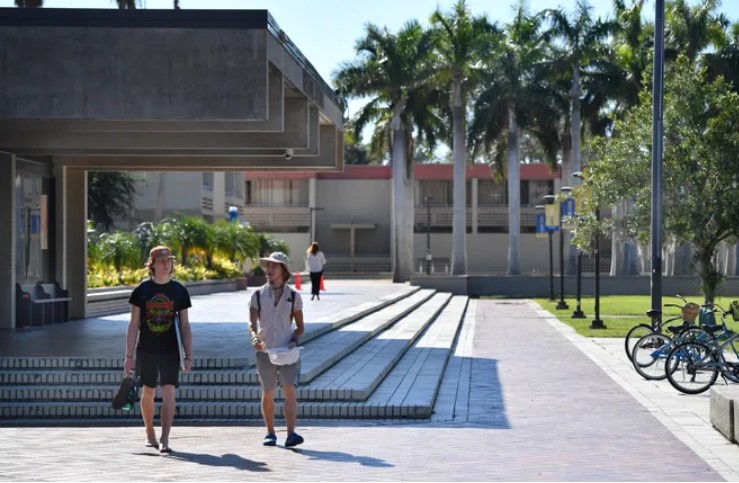 Despite what is usually a quiet month of January for Sarasota’s New College of Florida, word still spread fast among students about Gov. Ron DeSantis’ plans to reshape the school.

On Friday, DeSantis announced six new appointments to the college’s 13-member board of trustees that would amount to a conservative takeover of the governing body. The appointments come as the governor looks to shift the historically liberal New College toward the political right, appointing conservative activist Christopher Rufo and also a current dean from Hillsdale College.

The small student body at New College has a reputation for leaning toward the political left, and some students on campus Monday said the governor’s appointments do not represent what New College stands for.

Audrey Dickson, a 20-year-old theatre and dance performance studies major, said the college has a large LGBTQ+ population with resources focused on them, such as a Gender and Diversity Center. She said she fears the new board majority could move to remove these resources.

“The new appointees might not have those interests in mind, just based on what I’ve heard from their political standpoints,” Dickson said.

New College students would likely still express themselves however they want, even if resources are removed, she said.

Several students said they would not have enrolled at New College if it were branded as another Hillsdale College, a small Christian private college in Michigan that has been active in conservative education politics.

Nayelis Cardenas, a 21-year-old biology major, said she chose to attend the college because of its welcoming environment for women in STEM.

She said the changes new board members such as Rufo could make might not align with what she said New College and its student body stand for.

“We fight for diversity and equity, and we always believe that this is very much important here,” Cardenas said. “I feel like the way that Rufo talks about different issues really does not align with a lot of New College.”

On Twitter, Rufo said he wants to eliminate diversity, equity and inclusion policies, develop “a new core curriculum” and restructure the administration and academic departments. He is known for his activism on transgender and racial issues, and also joined DeSantis as he signed the Parental Rights in Education Act, dubbed the “Don’t Say Gay” bill by critics.

He recently applauded DeSantis on Twitter for requesting information on diversity, equity and inclusion and critical race theory at all Florida colleges and universities.

Some at the school are planning to protest the changes to the board and are sharing information online about how to right the move.

New College President Patricia Okker said in a statement that she’s excited to hear the new ideas from the appointees, and is looking forward to working with them.

“I see tremendous opportunity for New College and I believe that our new trustees will bring fresh ideas and new perspectives. New College has a long history of embracing change, all while being true to our mission of academic excellence,” she said.

Okker also said she was “eager to hear from” the new board members and that she was “also eager to share with them what I have grown to love about New College and some of the key challenges we face. Working together, we have an opportunity to make New College a national model for a top-tier liberal arts college, and that remains my number one priority.”

Reaction from DeSantis political allies has been positive. On Friday, Sarasota state Sen. Joe Gruters said in response to DeSantis’ appointments that the governor had a “bold vision” for New College, and that “The state has propped it up but it is time for a transformation to a model that is sustainable.”

The remarks contrasted with what he said in 2020, when a bill was considered in the Florida Legislature that would have put New College under the umbrella of Florida State University. In a guest editorial published in the Herald-Tribune he called it a “a beacon of shining success as an independent collegiate institution in Sarasota” and cited its high ranking for a reason to maintain its independence. He also argued that a decision to change how it was operated should “require time, workshops, and empirical data” and added it was “imperative that we vet the idea in committee and allow all institutions and stakeholders to voice their opinions and concerns,” adding that it would have impacted “the lives of students, faculty, our community, and Florida’s ability to maintain a top-tier higher education reputation on the global stage.”