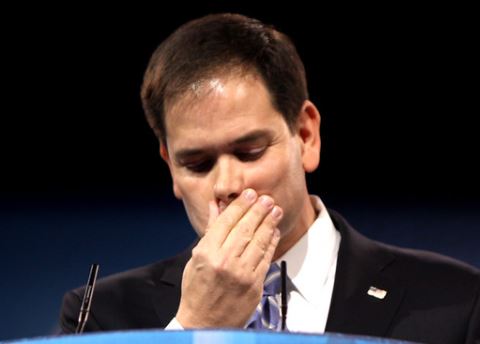 Florida Democratic Party Executive Director Marcus L. Dixon released the following statement on a new report that found Marco Rubio is yet again failing to show up and do the job Floridians are paying him to do:
“Marco Rubio’s repeated failures to show up for work leave Florida without a voice on critical issues, including important national security concerns, and they’re an insult to the hardworking people who pay his salary. If Marco Rubio had any other job, he would be immediately fired, and next November Floridians will see to it that he loses his job.”
Rubio has missed over a dozen recent hearings about protecting senior citizens, helping small businesses, and vital issues of national security, including the nomination of an ambassador to China. The recent news is part of Rubio’s long history of failing to show up for his job. During his failed presidential campaign, Rubio skipped critical national security briefings for fundraisers, earning the worst attendance record of any sitting Senator at the time.

Florida state representative Nick Duran released the following statement today condemning Marco Rubio for failing to show up for critical hearings in the Senate after a new report showed Rubio has missed over a dozen recent Senate hearings:

“This is far from the first time Marco Rubio has been called out for skipping out on his job. His refusal to change after years of Floridians demanding he show up for work is an insult to everyone he represents. Floridians deserve a leader who will take responsibility and put their interests first, not a self-serving politician like Marco Rubio who abandons his job to advance his own agenda.”

Marco Rubio’s history of failing to show up for his job goes back years. Rubio was deemed an “absentee senator” during the 2016 election when he missed important national security briefings to attend fundraisers for his failed campaign.

After a report in the Orlando Sentinel revealed that Marco Rubio has missed at least 14 committee hearings in recent weeks, leaders from Tampa held a press conference on November 18th to highlight Rubio’s record of failing to show up for work and demand he start doing the job Floridians elected him to do.
See below for highlights from the press conference, and watch a full recording here:
“I used to be an elected official and there is nothing more important than showing up for votes and hearings and doing what you told people you would do when you ran for office…People want you to do what you were sent there to do. They don’t send you there to raise money. They don’t send you there to run for President. They sent you there to be the United States Senator for the state of Florida…There is nothing on your schedule that trumps doing the work of the people. All the other things are secondary. But unfortunately it appears for Senator Rubio that what’s coming in secondary is the thing that he got hired to do,” said Sean Shaw, former state representative and Democratic nominee for attorney general.
“As an electrician…if we don’t show up for work, we get fired…Our apprentices have to abide by state standards. If our apprentices miss three apprenticeship classes, they get terminated from the program. Everybody has standards that they have to abide by, so I don’t understand why Senator Rubio doesn’t have standards himself. He should be held to the highest of standards…Senator Rubio, it’s time to get back to work like the rest of us hardworking Floridians,” said IBEW leader and president of the West Central Florida Labor Council Shawn McDonnell.
“Let’s be clear, this is a complete failure to do the most basic part of his job: showing up for work. And Floridians who must show up for work to feed their families, sometimes under dangerous conditions, won’t stand for it…Rubio is doing what he’s always done: using his position to serve his political ambitions and trying to score points at the expense of everyday Floridians,” said Pinellas County Democratic Party Chair Lucinda Johnston.
The report showed that Rubio had missed committee hearings covering vital issues to Floridians – from discussions of how to protect senior citizens, to the work of the Small Business Committee, to hearings on key national security issues that included the nomination of the ambassador to China. The recent news is part of Rubio’s long history of failing to show up for work. Rubio had previously skipped critical national security briefings to attend fundraisers for his failed presidential campaign. In 2016 he earned the worst missed vote record of any sitting Senator at the time.

Facebook
Twitter
Email
PrevPreviousDeSantis brings back Florida lawmakers to crack down on pandemic mandates
NextWhat have Democrats and Biden accomplished in 2021?Next