No surprise that Rubio and Scott are in lock step 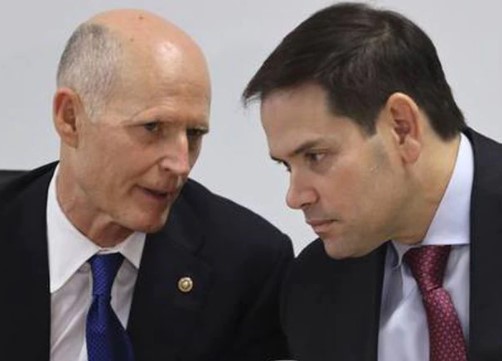 The following editorial appeared in The Daily Sun on April 11, 2022.

OUR POSITION: Both Republicans and Democrats are guilty of failing to justly consider Supreme Court candidates on their merits.

We can’t be surprised, but we can be disappointed, after Florida Sen. Rick Scott and Sen. Marco Rubio voted against confirmation last week for Ketanji Brown Jackson.

Not only was Jackson overwhelmingly qualified, but she was a Floridian for gosh sakes. What a proud moment for the state and the nation to make her the first female Black Supreme Court justice.

The choosing of SCOTUS justices the past few years has turned into gutter politics. It has become a matter of whichever party was not involved in choosing the candidate (read that whichever party was not sitting in the White House) smearing the would-be justice with personal attacks and off-the-wall accusations that sometimes have no merit. These tactics are the only way those voting against the confirmation can look in the mirror and justify their actions.

The nation got a hint of what was to come way back in 1987 when Democrats blocked Robert Bork.

But that debacle was an anomaly at the time when good sense usually prevailed and justices were normally approved in a bipartisan manner.

Clarence Thomas faced a challenging fight to get on the court, but it was not petty politics and more about sexual misconduct accusations that threatened his approval.

Antonin Scalia, Anthony Kennedy, and Chief Justice John Roberts all breezed through the nominating process with a good majority of Congress voting in their favor.

The bad feelings that control today’s rancor over SCOTUS appointments can look to 2016 when Scalia died for a tipping point.

Mitch McConnell, Senate majority leader at the time, made it clear he would not allow a vote on a new justice while President Obama was in office and had the power to nominate a successor. That delayed the vote for 11 months, until Donald Trump was elected and was able to name justices the GOP approved of — in swift order we might add.

Perhaps, if the shoe had been on the other foot, Democrats would have held the nomination hostage until the next election also.

The most recent nomination of Jackson brought ridiculous charges that she had been lenient on sentencing of pedophiles. It was nothing more than a smear tactic and a campaign Republicans embraced and could even use in the mid-term elections. A close look would confirm that almost all of Jackson’s sentencing of pedophiles falls within guidelines followed by conservative judges as well.

Going back to our two state senators, Rubio’s excuse was broad and undefined.

“I do not support nominees who believe the job of the Supreme Court is to make policy rather than apply the Constitution as written,” he said.

Scott, our former governor, played the sex offender card for his reason not to endorse Jackson. He charged she had a pattern of being weak on sex offenders. Again, there was no evidence she was any more lenient, given guidelines for such cases, or easier on sex offenders than any other judge.

Unfortunately, we don’t see these political games with Supreme Court nominees stopping any time soon. The only pause will be because most all the justices now appear to be healthy and young enough to be around for a few more years.

Perhaps, depending on future elections and turnover in Congress, some day we can return to judging candidates on their talent and not which political party nominates them.