Obamacare is everywhere in the unlikeliest of places: Miami 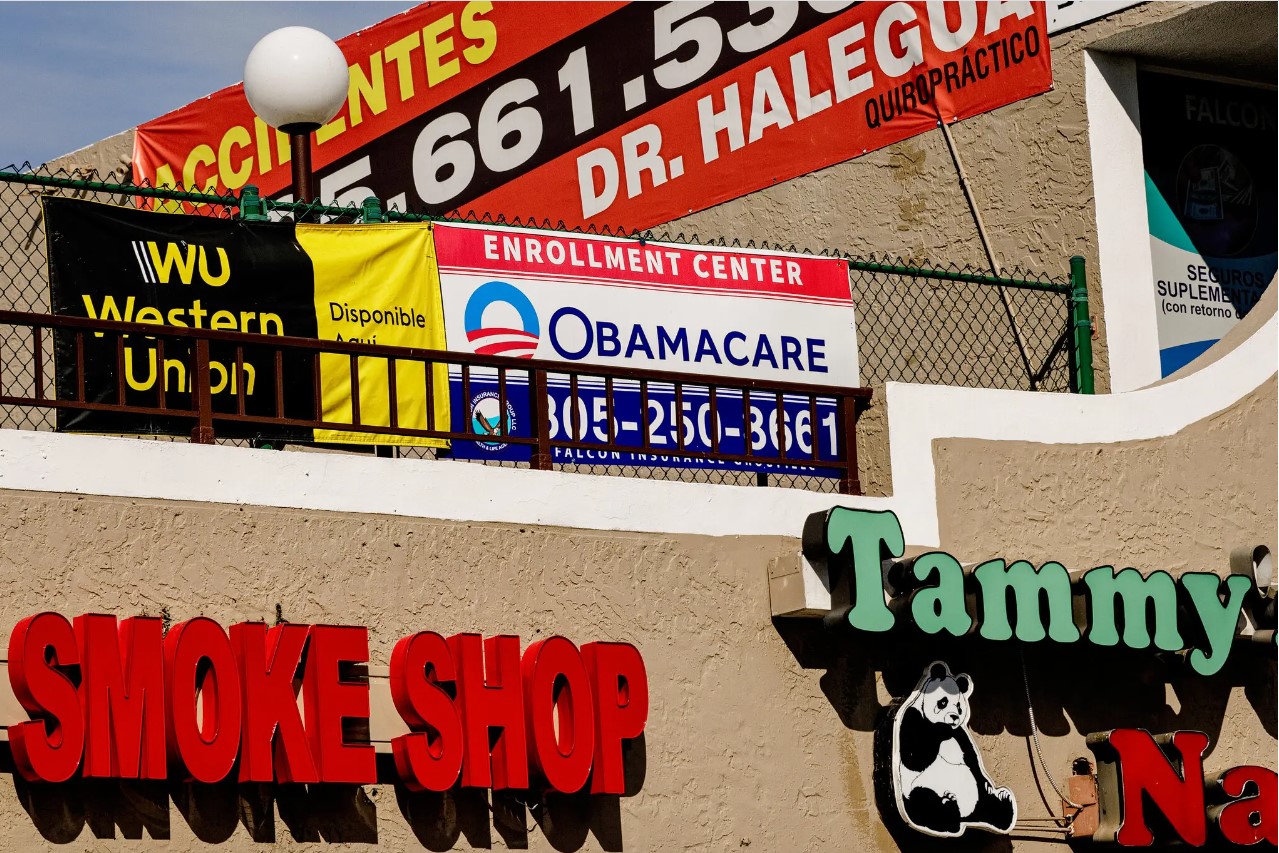 MIAMI — Lídice Hernández opened an insurance agency last year on a busy street, affixing to the storefront a logo that has become deeply familiar in South Florida: a white sun rising over the red stripes of the American flag, all encased in a big, blue O.

“Obamacare,” it read underneath.

Similar displays are common along some of Miami’s main thoroughfares, almost 13 years after President Barack Obama’s signature health policy, the Affordable Care Act, became law and critics branded it with his name. Everywhere you look, especially during the open enrollment period that runs from November to January: Obamacare, Obamacare, Obamacare.

“If we don’t use it,” Ms. Hernández explained of the moniker, “people don’t know that we sell it.”

And in Miami, people really want it.

On its face, the program’s outsize popularity in South Florida remains one of its most intriguing data points. The evidence is visible in every Obamacare logo deployed — not just on storefronts but on trucks, flags and billboards — to sell health insurance, as agents in the crowded local market jockey to enroll people. This year’s open enrollment period ends on Sunday.

Florida has far more people enrolled in the federal health insurance marketplace created by the Affordable Care Act than any other state does, a distinction that has been true since 2015. Driving those numbers has been the Miami area, where older, Republican-leaning Hispanics appeared loath to embrace government-subsidized health insurance when the law was enacted. At the time, it ignited some of the most pitched partisan battles in the nation’s recent history.

In particular, some Miamians who had fled left-wing leaders in Cuba and other Latin American countries chafed at the law’s requirement — later eliminated — that people have health coverage or face a penalty, which critics decried as “socialism.”

The region has only tilted more Republican since then, flipping red in the governor’s race last year for the first time in two decades. Yet in 2022, the two ZIP codes with the most enrollees in Affordable Care Act coverage nationwide were in Doral and Hialeah, cities west and north of Miami known for their right-leaning Venezuelan American and Cuban American communities. And the county with most enrollees in the country remained Miami-Dade.

“It’s ingrained in our community,” said Nicholas X. Duran, a former Democratic state representative who used to work for a nonprofit group that encouraged Americans to enroll in Obamacare plans and now works for the health insurer Aetna. “It’s stuck.”

So is the ubiquitous logo, which got its start as the symbol for Mr. Obama’s 2008 presidential campaign, said Sol Sender, who designed it. It was never intended to represent the health care law, Mr. Sender said, calling its co-opting by enterprising insurance agents “just pretty organic.”

Health Care in the United States

Which is not to say that policyholders, while glad to have coverage, are always happy with their plans. Gisselle Llerena, one of Ms. Hernández’s clients said she had been unable to get her insurer to sign off on a test her doctor recommended.

“I have an M.R.I. pending from a century ago,” Ms. Llerena, 50, said in Spanish as she recently dropped in on Ms. Hernández’s office in a modest strip mall. “But the insurance doesn’t want to cover it.”

Still, Ivan A. Herrera, the chief executive of the Miami-based UniVista Insurance agency, which caters to Hispanic people and prominently advertises Obamacare plans, said he has seen plenty of evidence that the coverage has helped people.

“I know customers who have had open-heart surgery,” he said. “They never went to the doctor. They never had a blood test. They never visited a specialist. And now they can take care of themselves.”

Each year, Mr. Herrera’s business has “doubled the amount of people that we have in Obamacare,” he said. “Obamacare is massive.”

About 2.7 million Floridians out of the state’s population of about 22 million enrolled in a plan through the federal insurance marketplace, which the health law created, in 2022. Compared with Texas, which has about 30 million people but only about 1.8 million enrollees, “Florida is like an A.C.A. monster,” said Katherine Hempstead, a senior policy adviser at the Robert Wood Johnson Foundation, a charity focused on health.

The average monthly premium last year for Floridians with marketplace plans was $611, and for those who qualified for federal premium subsidies, the average amount was $552 per month, slightly higher than the national average, according to the Kaiser Family Foundation, a nonprofit health policy group.

Early federal data suggests enrollment has jumped again for 2023, with 15.9 million plan selections nationally in the federal marketplace and those run by states, including almost 3.2 million — roughly one-fifth of the total — in Florida.

That Obamacare has become part of the fabric of Florida life is also striking given the state’s early opposition to the law, led by Rick Scott, then the Republican governor. Mr. Scott, who is now a U.S. senator, barred “navigators” — those who helped people sign up for coverage — from state health department offices in an effort to undermine enrollment.

The Republican-controlled State Legislature has not expanded Medicaid, the federal health insurance program for low-income people, as allowed under the Affordable Care Act, making Florida one of only 11 holdout states. About 790,000 currently uninsured Floridians would be eligible for expanded Medicaid, according to Kaiser; without it, other low-income residents have turned to the federal marketplace for subsidized coverage, which is one reason Florida has such high enrollment.

About 2.7 million Floridians out of the state’s population of about 22 million enrolled in a plan through the federal insurance marketplace in 2022.

Obamacare is also popular in the state because it is home to many retirees who are younger than 65 and not yet eligible for Medicare, the federal health insurance program for older people. Others opt for the health insurance because they have recently moved from other states and may be in between jobs. And many employers in the state do not offer working Floridians robust benefits that include health care coverage.

“In South Florida especially, you’ve got a lot of people who are working in entertainment or restaurants, where they don’t have an offer of health insurance,” said Karoline Mortensen, an associate dean and professor of health management and policy at the University of Miami. That is especially true for Hispanics, she added.

When the federal health insurance mandate lapsed, Dr. Mortensen found that some Latinos dropped their coverage, suggesting that they had gotten insurance only because they were required to. But Hispanic people still continued to get medical care at far higher rates than they had before the federal marketplace was created in 2013, she said.

The Kaiser Family Foundation estimates that Florida is the state with the second-highest percentage of eligible people who have enrolled in an Affordable Care Act plan, said Cynthia Cox, a Kaiser vice president.

She credited local leaders and insurance agents with promoting the law’s benefits, even when the state did not. Similarly, Dr. Mortensen referenced a moderate Republican state senator who, when the federal marketplace opened, urged his constituents to enroll.

Ilse Torres, an insurance agent in Miami, said she had educated her clients “bit by bit” that Obamacare is not health coverage, as many of them assume, but rather a law that created a federal marketplace and required insurers to cover pre-existing health conditions.

After Republicans in Congress tried but failed to repeal the law during the Trump administration, Ms. Torres said, the marketplace stabilized, drawing more major insurers and attracting new policyholders.

Ms. Hernández, who voted for Mr. Obama in 2008 but later registered as a Republican, lamented that Congress had not updated the Affordable Care Act to make more people permanently eligible for subsidies to help cover their insurance premiums. (Subsidies were temporarily expanded through the American Rescue Plan and the Inflation Reduction Act, and are in effect through 2025 — a major reason for the recent enrollment bumps.) But she was pleased, she said, that Republican lawmakers had stopped trying to repeal the law.

“Obamacare needs to be fixed,” she said. “But when I saw how easy it was to get it, I was like, ‘Oh my God, people don’t know about this. Why don’t more people get it?’”

She and her family are now insured through the program.