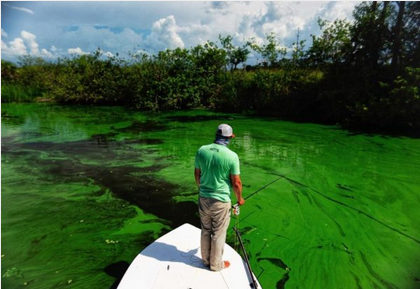 The following editorial was published in The Daily Sun on November 22, 2021.

OUR POSITION: Some progress is being made on cleaning up Lake Okeechobee and the harmful runoffs that have damaged our ecosystem and the rivers and canals on the Gulf Coast in the past.

There is now a rule book for how the water in Lake Okeechobee will be discharged for the next decade. While it may not be perfect, the long-awaiting guide that was written by the U.S. Army Corps of Engineers finally gives Floridians a plan of action and dictates how to handle the water that has wreaked havoc with the Caloosahatchee River and Florida’s Gulf Coast with its algae-laden discharges in the past.

We’re optimistic about the plan, Lake Okeechobee System Operating Manual (LOSOM), mostly because it got a thumbs-up from Captains for Clean Water.

Five years ago, a couple of fishing guides were fed up with the state’s poor management of its most valuable asset — our water. So they formed Captains For Clean Water, a grassroots 501(c)3 nonprofit organization that fights to restore and protect our water resources, according to its website.

We checked in with Captains for Clean Water’s Alycia Downs, director of education and awareness for the group, to get their opinion of the LOSOM, since they have much more experience with the problem than we do.

She responded by telling us, in an email, that the LOSOM plan is a “significant improvement over the status quo because it will reduce harmful lake releases and send three times more water south to the Everglades and Florida Bay. The best possible outcome of the LOSOM process is to have a lake operations plan that is better than the previous one and that has been achieved. This will absolutely make a positive difference for water quality in Florida,” she said. In the past, and perhaps still, how Lake Okeechobee waters have been managed has benefited special interests at the expense of communities along both coasts. No one has to remind us of the blue-green algae that showed up in canals and the Caloosahatchee River a couple years ago or the impact it allegedly had on boosting the red tide scourge that year.

The just-announced LOSOM as touted will:

While the new LOSOM plan will not go into effect until the end of 2022, it should go a long way toward alleviating the problems with Lake Okeechobee.

Captains for Clean Waters Executive Director Captain Daniel Andrews lauded the Corps for its transparency during the process of writing and researching the LOSOM.

His group is now focused on three key things that will continue to improve Florida’s water quality: the LOSOM and any tweaks to its language over the next few months, Everglades restoration and nutrient pollution.

Nutrient pollution, we believe, is a big key. Lake Okeechobee’s problems are exaggerated by the runoff from agriculture fields and pastures north of the lake. And the addition of fertilizer runoff and leaking septic tanks in Southwest Florida are also a huge problem for our waterways.

The LOSOM plan is a progressive step toward assuring better health for Florida’s water assets.