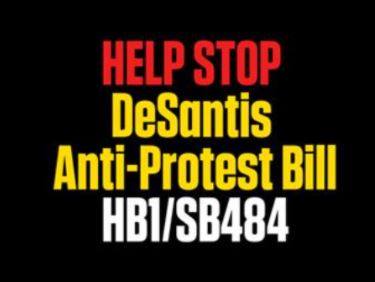 Contact your FL elected officials and tell them to vote NO on HB 1 and SB 484:

The ACLU of Florida opposes this bill because it is designed to further silence, punish, and criminalize those advocating for racial justice and an end to law enforcement’s excessive use of force against Black and brown people.

SB 484(Sen. Burgess)/HB 1(Rep. Fernandez-Barquin) was originally proposed last September by Governor Ron DeSantis to crack down on racial justice protests in the wake of George Floyd’s murder. This bill attacks our free speech rights, intentionally chilling the act of protesting by threatening overly harsh criminal penalties that will be imposed disproportionately on people of color. Florida law enforcement officers and our criminal legal system do not need harsher penalties to be misapplied against Black and brown communities exercising their First Amendment rights.

Vague and overly broad key definitions in this bill unconstitutionally threaten our First Amendment rights of free speech and assembly. For example, a new overly broad definition of “riot” would allow for the arrest and charge of a third-degree felony based on the riotous conduct of others, even though the individual arrested was lawfully exercising their First Amendment rights and did not engage in any violent and disorderly acts.

The Bill is Contrary to Criminal Justice Reform Efforts

This bill would result in more people, primarily Black and brown individuals, being incarcerated in jails and prisons for longer periods of time. By harshly increasing penalties and prison sentence lengths, creating brand new felonies, and deeming misdemeanors to be felonies resulting in felony disenfranchisement and all the collateral consequences of felony convictions (loss of voting rights, barriers to employment, education, and housing), this heavy-handed bill will exacerbate our overly high incarceration rates and undermine our criminal justice reform efforts.

The Bill is Unnecessary: Florida Statutes Already Criminalize Violence and Destruction of Property

This bill is entirely unnecessary. Current Florida law already criminalizes unlawful assembly, violence, property damage, traffic violations, violence directed at law enforcement, riots and sedition. Florida has more than enough laws currently on the books that punish the behaviors described in SB 484/HB 1. In addition to the above, Chapter 876, Florida Statutes, “Criminal Anarchy, Treason, and Other Crimes Against Public Disorder” provide law enforcement with an entirely separate arsenal to punish those who seek to violently overthrow our government. While the Governor is disengously trying to “rebrand” this bill as necessary in light of the attempted violent white-supremacist coup on our nation’s Capitol, tellingly, this bill does not even mention Chapter 876.

Further evidencing the bill’s intent to punish those calling for racial justice, the bill seeks to protect confederate monuments by creating a new second degree felony offense, punished by up to 15 years imprisonment, for pulling down or destroying ‘memorials’ that honor or recount “the military service ofany past or present United States Armed Forces military personnel,” or public service of a resident of the United States. Current statutes already protect against damage to property; the purpose of this bill is to elevate the protection of confederate monuments and harshly criminalize and disenfranchise those who seek their removal.

Throughout the bill, there are several offenses that would no longer be eligible for release on bail prior to first appearance. These “no release until first appearance” provisions require individuals to be held in custody beyond that which is currently required by law. Most outrageously, under SB 484/HB 1, individuals arrested for the minor offense of unlawful assembly “shall be held in custody until brought before the court for admittance to bail.” Thus, under this bill, anyone peacefully protesting should be prepared to spend the night in jail.

The bill allows the Governor, with the Cabinet, to reject and amend any city budget. This provision will require the municipality to spend taxpayer and staff resources to defend any appeal that is brought by any resident with regard to any amount of reduction in funding. Given the economic realities stemming from COVID, municipalities need flexibility within their budget to address public health and safety. It also waives sovereign immunity for municipalities, allowing individuals to bring civil lawsuits against municipalities for any amount of damages for personal injury, wrongful death or property damage based on an after-the-fact determination of whether law enforcement’s response to the unlawful assembly or riot was reasonable. Under current law, damages against municipalities are typically capped at $200,000, this bill would make municipalities liable for unlimited amounts of damages.

The Bill Will Increase Violence Against Protesters

The bill will embolden and encourage violence against protesters peacefully exercising their First Amendment rights by allowing a counter-protester to escape civil liability for injuring or killing a protester with their car, with a gun, or by any other means.