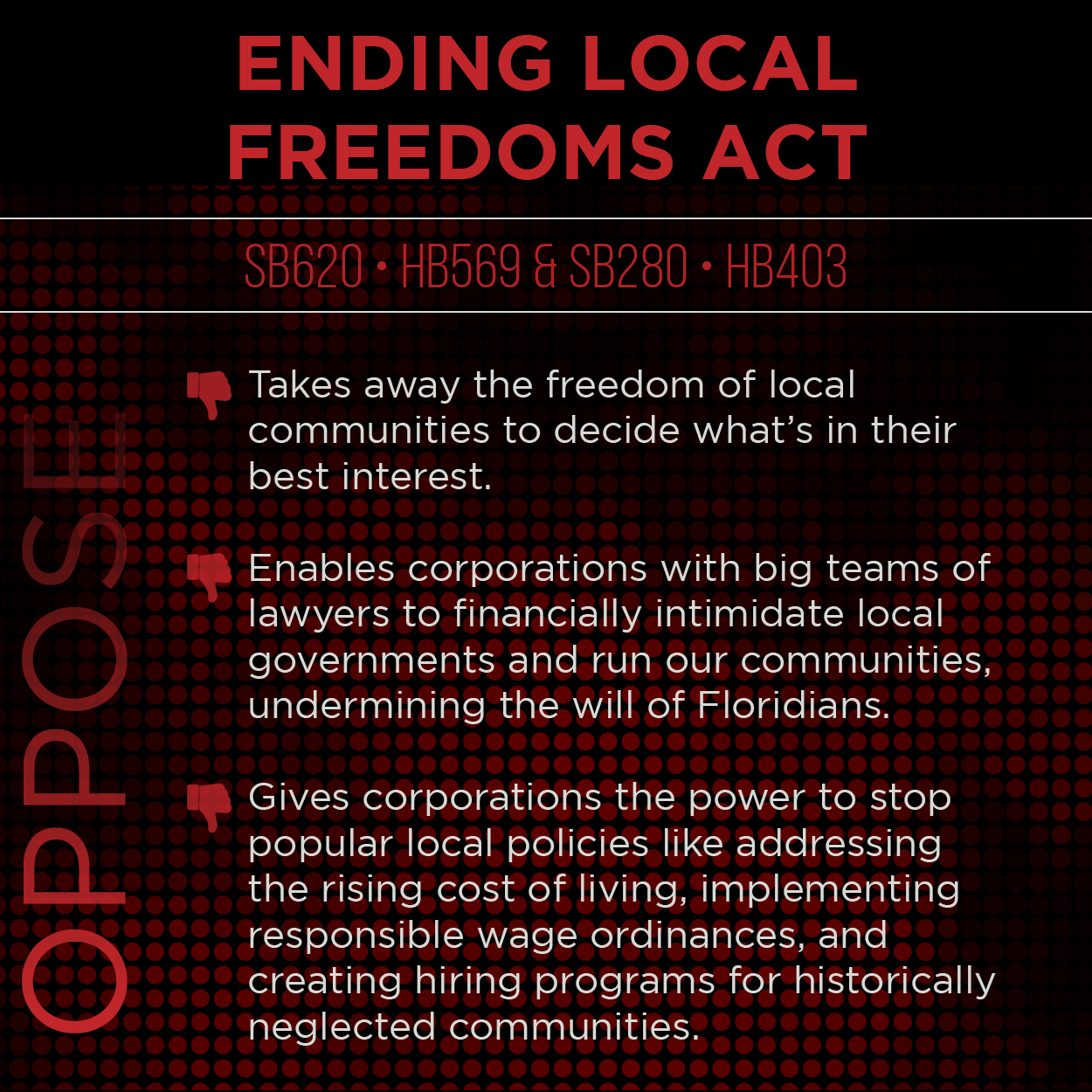 This year, our Florida Republican legislators, have launched their most extreme attack on local communities yet in the forms of SB 620/HB 569 and SB 280/HB 403, which we are branding collectively as the Ending Local Freedoms Act. These bills are priorities of Senate President Wilton Simpson at the behest of the largest corporate donors in Florida. If enacted into law, SB 620 would allow big business to run roughshod over local communities by allowing businesses to file litigation if an ordinance or ballot measure results in a 15% or more loss of profit, with local taxpayers on the hook for damages. They’ve coupled this bill with SB 280 which would require local governments to prepare costly business impact statements on the potential costs of new regulations or ordinances and would order an automatic court-ordered freeze if a lawsuit alleges they violate existing preemptions in law. There’s no other way to say this so let’s be direct: these measures could bankrupt local governments and allow unfettered corporate control through the threat of litigation.

Last Thursday, the Ending Local Freedoms Act passed the Senate. However, we can and must continue to fight them in the House, where their companion bills have each passed through one committee stop with two more ahead of them. This time, progressives are not alone in opposition to these pro-corporate takeover bills. Per the Miami Herald, “Florida TaxWatch, the business-backed research organization, warned in a new report issued Wednesday that the legislation will ‘lead to a number of financially motivated and malicious lawsuits, costing local governments over $900 million annually.’”

It is vital we communicate the impact these pieces of legislation could have on the lives of everyday Floridians. No longer could local communities like Miami Beach pass a ballot measure to change the time that alcohol can be served, local governments could lose the right to regulate the type of businesses that locate in residential areas, affordable housing and renter protections are at risk, and taxpayers would be on the hook for potentially millions of dollars in litigation. This bill is a direct attack on local freedoms and we must be vocal about saying so as it moves through the House.

Fortunately, we have a great piece of legislation to tout in its place in the form of the Restoring Local Freedom Act, HB 6113/SB 1900, by Representative Anna Eskamani and Senator Victor Torres. While Republicans are growing the size of government and taking away local freedom, the Restoring Local Freedom Act would address decades of attacks on local control by repealing 35 preemptions in statute and returning power back where it belongs, the people. This bill would empower Floridians to find solutions to the problems that are directly affecting our communities, and recognizes that what may work for Liberty County, might not work for Orange County. Let’s get this done! 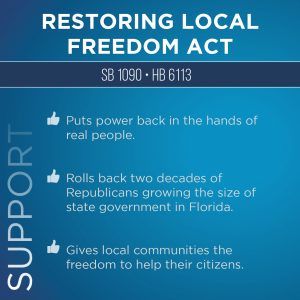 For more on the Restoring Local Freedom Act, check out the press release here.