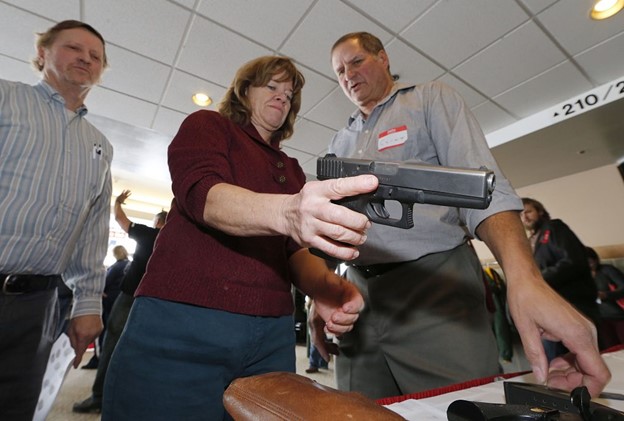 Gov. Ron DeSantis said Friday that he expects the GOP-led Legislature to pass a bill next year that would allow people to carry guns without a concealed-weapons permit, but a new poll of voters taken in Miami-Dade County shows that the public – particularly Hispanic voters – strongly oppose that measure.

The proposal is known by gun-safety advocates as “permitless carry” and by its Second Amendment supporters as “constitutional carry.”

DeSantis became the first Republican gubernatorial candidate in twenty years to win Miami-Dade — the most populous county in Florida — in this year’s election, and much has been written about how Hispanic voters have been drawn to the GOP in recent election cycles.

But the poll – conducted by Giffords Florida, a state affiliate of the gun violence prevention group that was founded by former Congresswoman Gabby Giffords – shows that 68% of Miami-Dade voters oppose permitless carry. That includes 65% of registered Republicans and 60% of voters who say they voted for DeSantis for governor in November.

The survey says that 60% of Miami-Dade voters “strongly” oppose the proposal. And the poll says that once voters are informed that the policy change would allow anyone who can legally purchase a firearm to carry a gun in public, opposition grows by 12%, with 81% of Hispanics opposing, 76% of non-party-affiliated voters, and 69% of DeSantis voters.

The survey also shows that around two thirds of Miami-Dade voters cite loopholes in the current laws on the books that make it easy for criminals to get access to guns is a major factor contributing to the amount of crime in their area.

The poll of 500 “actual voters” was taken by Global Strategy Group between Nov. 3 and Nov. 10. The margin of error is plus or minus 4.4 percentage points.

“In the 2024 elections, Democratic candidates can win in Miami-Dade and compete statewide if they embrace a renewed commitment to preventing gun violence,” says Debbie Mucarsel-Powell, former Congresswoman and senior advisor with Giffords Florida in a press release. “Voters in South Florida overwhelmingly support stronger gun laws and know that the Republican ‘guns everywhere’ agenda is far outside the mainstream. Governor DeSantis should reconsider his reckless plan to pass permitless carry in Florida—it puts far too many lives at risk and is an insult to victims of gun violence from Miami to Orlando.”

Giffords Florida was launched in August of 2022. The national group was founded by and named after former Arizona Congresswoman Gabby Giffords, who survived being shot in the head while meeting with constituents near Tucson, Arizona in January 2011.

On Thursday, Florida Speaker of the House Paul Renner said “yes” at a press conference when asked by DeSantis if the Legislature would push for a permitless carry bill in 2023.

And in Fort Myers Beach on Friday, for a bill signing ceremony on the property insurance package passed earlier this week, DeSantis said the issue of allowing gun owners in Florida to carry guns without a concealed-weapons license is something that he’s always supported.

“The last two years it was not necessarily a priority for the legislative leadership,” DeSantis said. “But we’ve been talking about it and he’s (Renner) pledged publicly and that’s moving forward, and it’ll be something that will be done in the regular session. And that puts us in line with the majority of states who have done that, and even states like Vermont and New Hampshire have been able to do that. So we’ll get that done.”

President Kathleen Passidomo did not speak on the gun issue on Friday.

More than 30 states allow the open carrying of a handgun without any license or permit, according to Giffords.

Facebook
Twitter
Email
PrevPreviousHurricane to homelessness: students without a home triples in Charlotte County
NextDeSantis stokes the culture wars at the expense of Florida schools and free speechNext