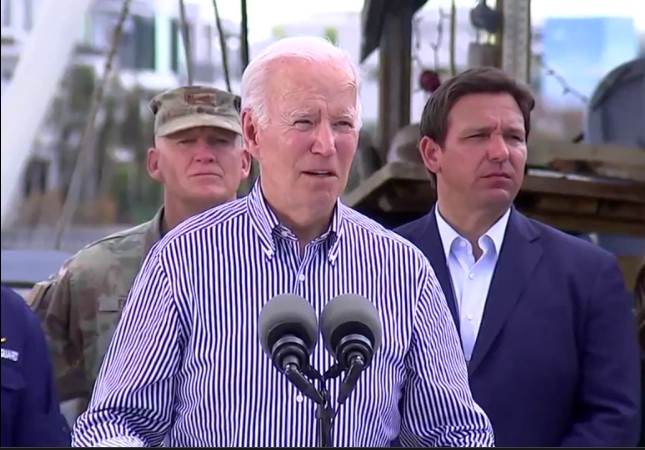 President Joe Biden has been taking his first look at the damage that Hurricane Ian inflicted upon Southwest Florida last week.

The president and First Lady Jill Biden arrived at Fort Myers about 12:45 p.m, Wednesday, where they were greeted by Cape Coral firefighters and other first responders, as well as Lee County public officials.

Shortly after that, Biden took an aerial tour of the damage that the storm inflicted upon parts of the region last week.

The president and the First Lady then were greeted by Florida Gov. Ron DeSantis and Casey DeSantis, the first lady of Florida. A White House pool report was unable to report on what was the nature of their conversation.

The president was scheduled to speak at 3:15 p.m., when he was expected to renew his pledge to help the state recover and rebuild from the Category 4 storm.

Before the president even left Washington, D.C. this morning, the White House had announced that the administration was extending the time period for federal funding for debris removal and emergency protective measures in 17 Florida counties affected by the storm.

Under the president’s major disaster declaration issued on Sept. 29, the federal government announced that they would pick up 100 percent of the total eligible costs for a period of 30 days from when Hurricane Ian made landfall. Wednesday’s announcement extends that another 30 days.

FEMA Director Deanne Criswell told reporters traveling from Washington, D.C., to Fort Myers on Air Force One earlier today that Gov. DeSantis had originally requested that the disaster declaration be 60 days. She said FEMA’s standards is to give 30 days until they learn what the impacts are.

“In this situation, it’s catastrophic, right?” she said, adding that with so many homes in Southwest Florida underwater, “60 days just seemed reasonable.”