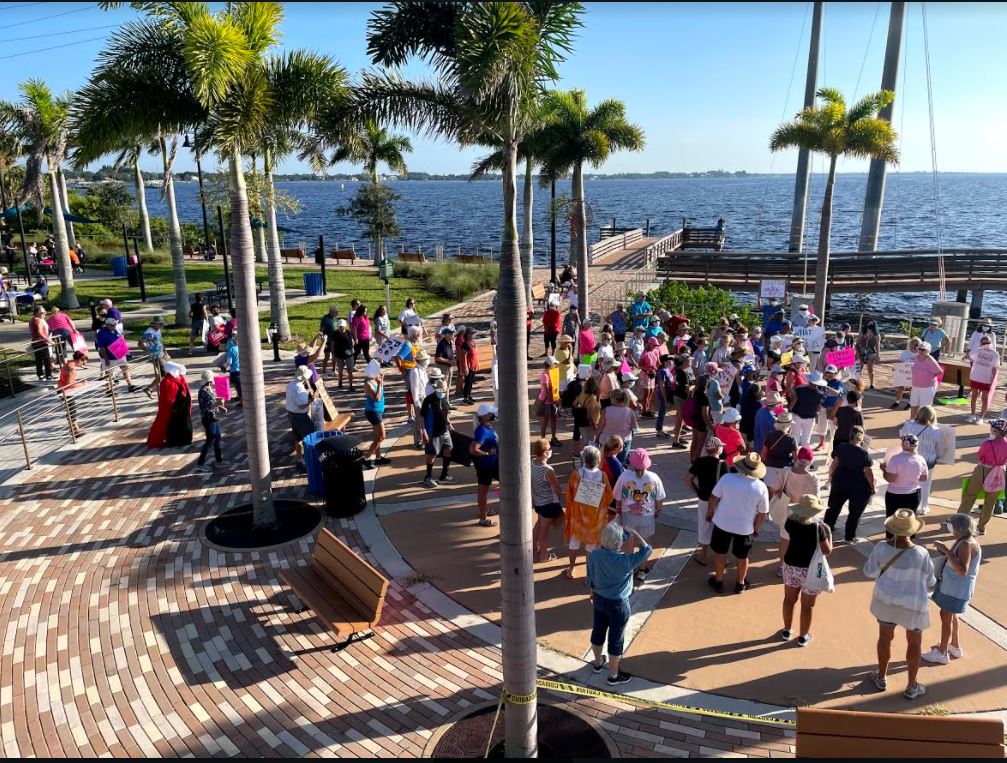 Editor’s note: On Saturday, October 2nd, 2021 Charlotte County Democrats and the national Women’s March organization hosted a march to the center of the Route 41 bridge in Punta Gorda from Live Oak Point, 5100 Tamiami Trail in Port Charlotte. Over 250 committed citizens  gathered to  hear from speakers regarding the imminent threat to women’s reproductive rights in Florida through pending legislation. Our Daily Sun covered the event; read their report HERE. 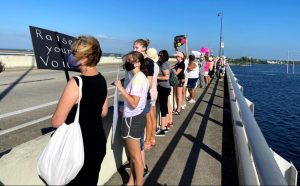 Florida is emerging as a hot spot for abortion activism, as thousands rallied across the state Saturday to protest a Republican proposal seeking to ban most abortions in the state and to call on the Supreme Court to protect Roe v. Wade.

The rallies, on a day of nationwide protests in defense of reproductive rights, show how the abortion debate in the swing state of Florida is becoming even more heated in the wake of legislation that went into effect in Texas on Sept. 1 outlawing abortion once a fetal heartbeat is detected.

Protesters in Tallahassee marched with signs saying, “Don’t Texas my Florida,” referring to a similar bill filed by state Rep. Webster Barnaby (R) making its way through the Republican-controlled Florida legislature that would also outlaw abortions when a heartbeat is detected, normally around six to eight weeks, before many people know they are pregnant.

As in Texas, the proposed Florida law would allow private citizens to sue anyone “aiding or abetting” an abortion procedure, including a taxi driver who unknowingly drops a patient off at a clinic, even years after the abortion took place — and seek at least $10,000 in damages.

University of Central Florida students Macy Martello and Leah Murray dance together after the March for Abortion Access at City Hall on Saturday, Oct. 2, 2021, in Orlando. (Chasity Maynard/AP)

Fingerhut, who organized a rally in support of reproductive rights in Fort Pierce, said, “If people were truly pro-life, they would support free health care and free contraception and allow us to own our own bodies.”

At this point, Barnaby’s HB 167 is in the hands of the Professions & Public Health Subcommittee of the Florida House of Representatives — a group made up of 12 Republicans and six Democrats.

The Florida legislature has previously chosen not to pass bills seeking to similarly restrict abortions past the point where fetal cardiac activity can be detected, but antiabortion activists believe the Supreme Court’s decision to let the Texas “heartbeat ban” stand could change things.

Republicans in the state have vowed to come forward with more restrictive legislation in the wake of the legislation passed in Texas, but it’s unclear whether Barnaby’s bill will be their preferred path forward.

Six-week bans in other states have been halted pending litigation over whether they violate the right to an abortion established in Roe v. Wade, the 1973 judgment that decriminalized abortion in the United States. But the Supreme Court declined to halt the Texas law, saying the court could not immediately weigh in because abortion providers had sued state officials — and not private citizens charged with enforcing the ban.

Protesters gathered across the nation Oct. 2 to demonstrate against recent efforts to restrict abortion access, including a Texas law that bans most abortions. (The Washington Post)

Unlike the Texas law, the Florida proposal allows for exceptions for rape, incest or medical emergencies that threaten the mother’s life.

Women’s March and other organizations planned protests in major cities in Florida, including Miami, Orlando and Fort Lauderdale, with local media reporting approximately 50 different sites across the state.

Nationwide, organizers said they planned more than 600 demonstrations in every state and in Washington, D.C., ahead of the start of the Supreme Court’s October term on Monday.

The Supreme Court is preparing to consider another case that abortion rights advocates consider a possible first step to overturning Roe v. Wade.

The Supreme Court, which has a 6-to-3 conservative majority, is set to consider a Mississippi law that would ban most abortions after 15 weeks of pregnancy, and in doing so said it would examine whether “all pre-viability prohibitions on elective abortions are unconstitutional.”

That worried many abortion rights advocates, who see the “viability standard” — the principle that abortions are allowed until the point where a child can survive outside the womb — as a cornerstone of abortion jurisprudence.

In Florida, the battle over abortion rights is influencing state politics. Floridians have a gubernatorial election in Nov. 2022. Gov. Ron DeSantis (R), who has said he’s running for re-election, regularly touts his antiabortion credentials but has evaded the question of whether he specifically supports legislation like the one Barnaby is proposing.

Earlier this month, before the bill was introduced, a spokesperson for his office told BuzzFeed News, “Gov. DeSantis doesn’t want to turn private citizens against each other.”

But he, like other Republican leaders in in the state, said he would like to see a bill limiting abortion passed in Florida, following developments in Texas.

“The Texas law represents a new approach and the fact that the Supreme Court didn’t block it from taking effect is encouraging,” Simpson said in a statement reported by the Sun Sentinel. “As an adoptive child myself, it’s important to me that we do everything we can to promote adoption and prevent abortion; therefore, I think it’s worthwhile to take a look at the Texas law and see if there is more we can do here in Florida.”

Meanwhile, state Rep. Charlie Crist (D), a candidate seeking to replace DeSantis in 2022, said in a tweet that the bill is “a direct attack on a woman’s right to choose,” and added, “we’re going to have to fight tooth and nail to protect reproductive freedom.”

One of his competitors for the Democratic nomination, Agriculture Commissioner Nikki Fried (D), tweeted that if she were elected governor, she would “fight like hell and veto any abortion bill that gets put on my desk.”