Proud Boys and Black Lives Matter activists clashed in a Florida suburb. Only one side was charged. 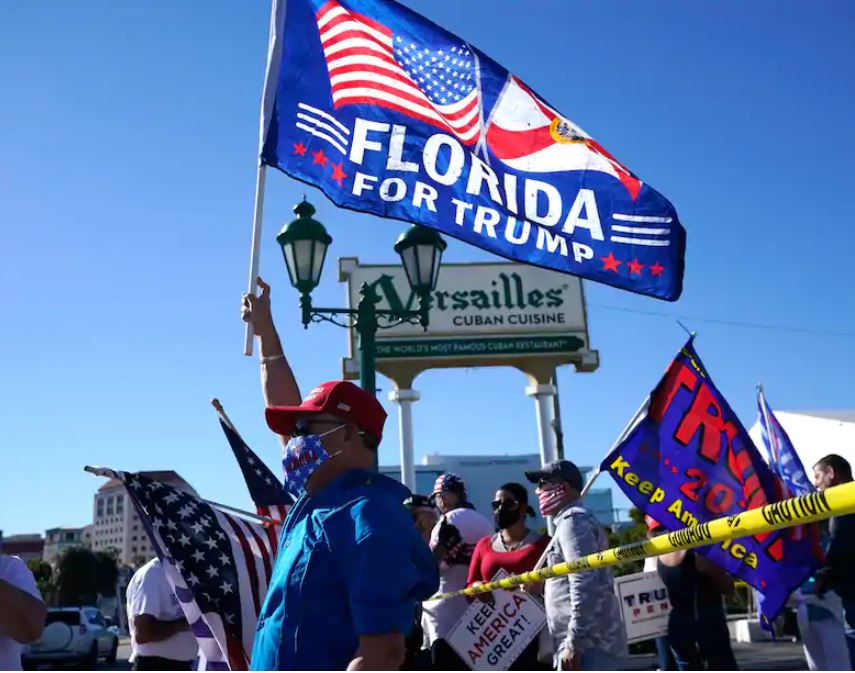 When local Black Lives Matter activists started marching through the small, coastal town of New Port Richey, FL, last summer — shouting slogans through bullhorns demanding racial justice — it took only a few days for the Proud Boys and other counterprotesters to show up and confront them.

Burly groups of mostly White men encircled the demonstrators. They revved motorcycles while yelling threats, obscenities and support for the police and President Trump, at times using their own bullhorns.

Amid fears that the confrontations could lead to clashes or shootings, police started enforcing the town’s rarely used noise ordinance, which essentially forbids disturbances louder than a close conversation between two people. But only the Black Lives Matter protesters were cited.

“We were harassed [by the counterprotesters]. We had a few guns brandished on us. … One guy even came up to me and flashed a White Power gesture in my face, but they didn’t get any noise violations,” said Christina Boneta, a Black 32-year-old mother who was taken into custody in late August and saddled with a $2,500 fine. “We are the ones who got the noise violations when, all summer long, we never threatened anybody, looted anything or burned anything.”

After months of public outrage and accusations of discrimination over the disparate penalties, New Port Richey police dropped the citations against Boneta and six other Black Lives Matter demonstrators in early January. But not before the Tampa-suburb became another front in the national debate over whether authorities treat left-wing protesters too harshly while cozying up to far-right extremists.

That discussion has turned particularly intense in Florida, where Gov. Ron DeSantis (R) and other GOP leaders are pushing for a sweeping state bill to crack down on disruptive protests, creating new classes of crimes that include up to 15-years in jail if police declare that nine or more people have participated in a riot.

Similar legislation has proliferated through statehouses around the country in recent years in response to racial justice demonstrations. At least 28 states considered bills that created new or harsher penalties for protesters last year, according to the International Center for Not-For-Profit Law, a global organization focused on laws affecting civic freedom.

The flurry of legislation has continued since the Capitol riot, many continuing to target blocking of traffic and shielding drivers who hit protesters. In Mississippi, lawmakers are considering a bill that would add up to one year in jail for protesters who block traffic. In Indiana, two state senators have proposed a bill that would make it harder for judges to grant bail to people who are arrested for attending an assembly considered unlawful.

Dozens of Floridians showed up at the state capitol in Tallahassee to testify against the governor’s protest bill in front of a House committee Wednesday, arguing that the measure would cripple free speech and make it easier for law enforcement agencies to discriminate against people of color.

“We just want to know, was it written on the same parchment paper that the slave codes were written on?” asked community activist Arlinda “Tray” Johns. “Because to us in the Black Community, this feels very Jim Crowish.”

The GOP-dominated committee approved the bill, which is expected to pass the full House in coming weeks.

DeSantis and GOP leaders have sought to reframe the proposal recently, saying it would also help prevent the kind of far-right assault that was inflicted on the U.S. Capitol earlier this month.

“What we saw in Washington D.C., and what we are seeing in Oregon and Washington [state], we don’t want to see here in Florida,” said state Sen. Joe Gruters, who is also chairman of the Florida Republican Party. “I don’t care if you are the Proud Boys or antifa. If you are a thug, you are going to jail.”

But James Shaw Jr., an attorney affiliated with the American Civil Liberties Union who helped represent Boneta, said his client’s experience in New Port Richey previews how the bill could be inequitably enforced against demonstrators in Florida.

“Make no mistake about it,” Shaw said, “the legislation was proposed in direct reaction to the Black Lives Matter movement, and to throw a bone to a certain voting bloc that was distressed by this movement and wanted to use violence against it.”

New Port Richey, a town of 16,000 residents located about 30 miles northwest of Tampa, is one of the most vibrant commercial centers of Pasco County. A population boom has boosted diversity in the overwhelmingly Republican county, where Trump won nearly 60 percent of the vote in November.

But Pasco County has long battled allegations of harboring racism. The Ku Klux Klan sponsored a stretch of highway there as recently as 1993.

That reputation for intolerance was a major reason Marlowe Jones, who said his grandparents were one of the first African Americans to settle in Pasco County in the 1920s, helped form an independent Black Lives Matter group here immediately after video of George Floyd’s death went viral in May, showing the Black man lose consciousness beneath the knee of a White officer in Minneapolis.

Initially, Jones was heartened by the honks of support he and fellow activists received from their neighbors as they held signs along a state highway. But by mid-June, that support faded, replaced by cries of “Blue Lives Matter” from passing motorists.

By early July, Jones said large groups of counterprotesters, many of them waving Trump flags, started showing up to drown out their message. Some identified as Proud Boys, an extreme-right group whose members are known to engage in violence, including the riot at the U.S. Capitol.

A Florida-based representative for the Proud Boys did not respond to messages. But Jonathan Riches, a veteran conservative activist from Tampa, said counterprotesters flocked to New Port Richey last year because residents were fed up with the Black Lives Matter activists’ tactics, which he said included disrupting restaurant patrons and shouting near parents and children in community parks.

Riches said he is not affiliated with any right-wing extremist groups, but he attended about a dozen counterprotests last year and does not recall abusive language being hurled at the Black Lives Matter activists. Rather, the activists were the ones causing disturbances, he said.

“If you got a bullhorn and yelling a message that is one thing,” said Ritches, 42. “But when you are screaming ‘F the police’ and ‘F Trump,’ and marching around downtown New Port Richey in all black, and screaming obscenities at children, I have a problem with that.”

Jones does not deny that some protesters used profanity during their demonstrations, but said it was due to their frustrations over seeing Confederate flags and white nationalist groups in their town.

But they kept showing up.

“We thought someone from inside [the police department] was communicating with them,” he said.

Later in the summer, the activists were alerted to a Facebook post by a local businessman that showed him dressed in black tactical gear while holding an assault rifle.

“So BLM is bringing a bunch of people to downtown NPR tonight?? Hold on, let me get dressed,” the photo caption read.

New Port Richey police officer Corey Oliver responded, “They canceled for tonight, but will be doing silent protest tomorrow, per my department’s intel.”

City leaders said Oliver has since left the police department, but they declined to comment further, calling it a personnel matter. Oliver could not be reached.

Black Lives Matter protesters say they have other reasons to be leery of local officers’ connections to the Proud Boys and other extreme-right groups. In early September, activists unearthed a video that shows New Port Richey police officers praying with a group of counterprotesters in a restaurant parking lot ahead of a Black Lives Matter demonstration.

A department spokesperson said Port Richey Police Chief Kim Bogart was unavailable to comment. But City Manager Debbie L. Manns, who oversees the department, said that there was “no malice” in the officers’ actions and that they “did not intend to side with any particular group.”

“In their profession, they need to accept all the prayers that may be offered to them,” Manns said.

New Port Richey Mayor Rob Marlowe (D) said the city dispatched a sizable number of officers to the demonstrations to keep the Black Lives Matter demonstrators safe as “whack jobs from the far-right” traveled from as far as North Florida to confront them.

At least one of the marches did end in violence, and Jones said he was the one who ended up facing a felony charge as a result.

One night, when about a dozen protesters marched past a local bar, a patron stormed out shouting epithets and struck two female demonstrators. When police arrived, Jones said he tapped a police officer on the arm to give him information about the suspect.

Jones said he was arrested a week later on charges of battery on a law enforcement officer and obstructing a police officer.

“They were clearly trying to destabilize our movement and trying to target those who they thought were leaders of our movement,” Jones said.

“He was told stand back, more than once but he wanted to get himself embroiled in the situation,” she said, calling it “blatantly false” that police were targeting protest leaders.

Yet, attorneys for the Black Lives Matter activists contend that the use of city’s noise ordinance revealed just how unequally some laws can be administered.

Photographs taken by the activists show both sides using megaphones, and Tampa civil rights attorney Luke Lirot, who represents the protesters, called it “blatantly unconstitutional” that only the activists were cited for violating the ordinance.

Manns rebutted that the counterprotesters cooperated with police.

“When the other groups were told, ‘don’t use the megaphone, they put them in their cars,” she said.

In the end, New Port Ritchey leaders concluded it was not worth the city’s time to defend their position in court and dismissed the citations. But the ordeal only reinforces concerns of activists and legal scholars about DeSantis’s legislation.

In addition to creating new crimes and penalties for damaging memorials, the bill increases penalties for battery of a law enforcement officer and outlaws “mob intimidation,” defined as two or more people attempting to compel another “to assume or abandon a particular viewpoint.”

In a statement, DeSantis said the legislation “aims to stop violent assemblies, combat rioting and protect Florida’s law enforcement” and “does not discourage peaceful assembly or freedom of speech.”

But Melba Pearson, a civil rights attorney and former homicide prosecutor in Miami-Dade County, said she worries the legislation will have a “chilling effect on free speech,” especially for minorities who decide to protest in Florida’s most conservative counties.

“There is going to be disparity in enforcement, depending on who is involved and depending on the people who are at the protest,’ Pearson said. “You may find enforcement being done one way in metropolitan areas, but you cross to another jurisdiction, and you will see it done in completely a different way.”

Julie Tate contributed to this report.