Providing power to those who want solar 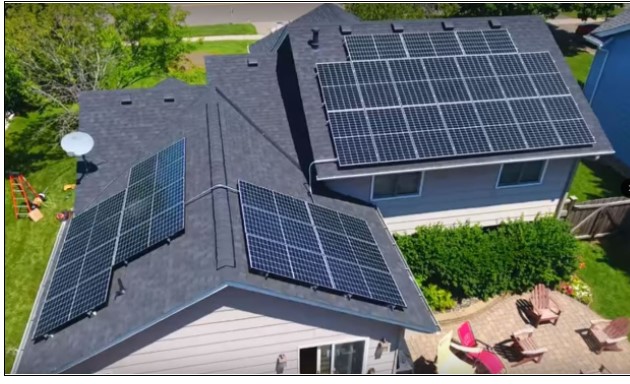 VENICE — In the future, solar technology will become even more accessible for homeowners because of ideas for solar tiles and shingles coupled with incentives on solar investment.

However, legislation in Florida almost stopped the growth of solar for homeowners in the state.

With its mission to bring solar to Florida and Sarasota County, Gulf Coast Community Foundation supported Gov. Ron DeSantis vetoing H.B. 741, a bill that would have impacted solar.

“It was a wonderful surprise,” Gulf Coast President and CEO Mark Pritchett said.

Gulf Coast has supported the expansion of solar in the area for seven years through its partnership with Solar United Neighbors.

With the bill going through legislation, Pritchett said it was a shock when the governor vetoed it.

“I was not making any headway with any members of the legislature to slow down and kill the bill,” Pritchett said.

He said the bill would’ve had a “negative impact” on people going solar in the state with longer times to be reimbursed on the investment.

The legislation would have also affected solar net metering, which is a program that allows rooftop solar customers to receive a fair retail credit from their utility for excess energy generated and shared directly with neighbors, according to a press release.

However, Pritchett said DeSantis was “on the side of consumers” with the veto on April 27.

SUN is a nonprofit based in the D.C. area that acts as a resource for homeowners wanting to go solar. While the organization does not sell anything, it functions to help people navigate going solar with many guidebooks and other resources on the process.

“A partner that really provided seed money for us to grow and continued to support us,” Julia Herbst, the Gulf Coast program associate at SUN, said about Gulf Coast Community Foundation.

In 2016, Gulf Coast helped with a $30,000 grant so SUN’s Florida operations could organize more co-ops in Florida communities, including Sarasota County.

“In the sunshine state, it makes sense to incentivize homeowners or anybody to install solar,” Pritchett said.

The funds from Gulf Coast helped SUN expand their work into Sarasota and help with its education and advocacy programming.

While the funds did not directly go to aiding payments for solar, the grants helped SUN’s mission for helping homeowners obtain solar installations.

One of the many aspects SUN handles is working with cities to “encourage solar friendly policies” such as permitting barriers, fees or solar permit and inspection timelines, Herbst said.

“Co-ops are catalysts for homeowners and businesses going solar, and those people create the foundation of our engagement and advocacy programming,” Herbst said. “With SUN, homeowners save money off the cost of their system, and make informed decisions as far as equipment, warranties, and the financial return on investment.”

Through these local co-ops, residents can join together to buy solar panels from installers at lower rates.

Herbst said around 45 homes went solar in Venice, one in Osprey, four in Nokomis, and three in North Port.

“As many people we can help, the better,” Herbst said.

Venice resident Ed McMahon was part of the Sarasota area co-op with SUN in 2020.

McMahon said he looked into solar before learning about co-ops and found the cost was around twice as much without joining a co-op.

After hearing from his neighbor about a co-op they were in, McMahon decided to look into this route for obtaining solar panels.

McMahon bought 16 panels for his house and has moved his electricity bill from around $140 per month to $11, which has been the highest bill with solar, he said.

As a solar homeowner, McMahon has an app that tracks what each panel is producing and if they are damaged in any way.

“If I was a lot younger, I probably would’ve done it a long time ago,” McMahon said about going solar.

He said while he might not see the full investment, he hopes having solar panels on the house will make it more marketable to sell in the future.

McMahon said his advice for those looking to go solar is to check on their roofing. He conveniently had a new roof installed right before getting his solar panels, so he won’t need to worry about putting on a new roof anytime soon.

McMahon mentioned he could see it being difficult for those that get solar panels and then must get a new roof installed after.

Since his installation around two years ago, McMahon said he wouldn’t change a thing about going solar through a co-op.

“I always recommend a co-op because it’s a lot less expensive,” McMahon said.