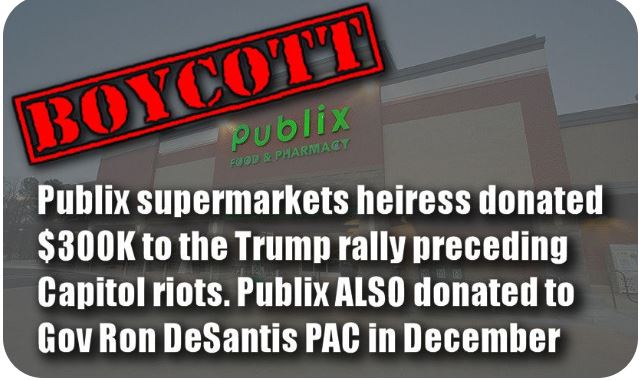 Editor’s note: Publix also recently donated $100,000 to Desantis’ PAC; just before it got rights to distribute the COVID vaccine. Just a coincidence?

It’s only the latest in a series of major contributions to conservative causes made by Publix heirs or the popular supermarket chain itself.

Fancelli, a part-time Lakeland resident, reached out to far-right talk show host and conspiracy theorist Alex Jones about helping fund a Jan. 6 event and ultimately contributed $300,000 to the rally through a former fundraising representative for the Trump 2020 campaign. The money helped pay for the majority of the $500,000 rally where former president Donald Trump spoke and incited attendees to march to the Capitol, preceding the riots, the Journal found. Fancelli did not respond to the newspaper’s multiple requests for comment.

The Wall Street Journal also reported that Fancelli picked Trump campaign fundraiser Caroline Wren to coordinate funding for the Jan. 6 rally. Wren was listed as “VIP Coordinator” in the event’s permit and played a major role in organizing it.

Fancelli, 71, is the daughter of Publix founder George W. Jenkins, who died in 1996.

According to the Miami New Times, Fancelli and her two children contributed to federal maximum amount of money to Trump’s reelection campaign in 2019, contributing around $171,000 to Trump Victory. The Wall Street Journal reported she gave more than $980,000 to an account for both the Republican Party and Trump’s campaign in the 2020 election cycle.

According to The Ledger, FEC records show she has written checks for $10,000 to Republican committees in about 20 states, including Kentucky, Nevada and New Mexico, as well as Florida.

Fancelli isn’t the only Publix heir to be active in GOP fundraising. Carol Barnett Jenkins, George Jenkins’ daughter and Fancelli’s older sister, made a $10,000 donation to former Georgia Sen. David Perdue’s 2020 campaign, and then another $100,000 to a PAC that financed the runoff campaigns for Perdue and Kelly Loeffler, also of Georgia, according to CLTampa. Both lost on Jan. 5 to Democrats Jon Ossoff and Rev. Raphael Warnock, causing Republicans to lose control of the U.S. Senate. In 2016, she also contributed $800,000 to a conservative campaign pushing to prevent medical marijuana from becoming legal.

Campaign contributions from Publix itself, not just its heirs, became a polarizing issue during Florida’s 2018 elections. The grocery superstore and its heirs contributed more money to Adam Putnam’s gubernatorial bid than any other candidate since at least 1995 and likely for the entirety of the company’s history.

Publix, the heirs to the company’s founder and its current and former leaders gave Putnam $670,000 in a three-year-span. The employee-owned company also helped bankroll a handful of well-connected business groups who contributed millions of dollars to the Republican candidate. Putnam, like Publix, is a product of Polk County — which company officials said was a factor in their support.

But gun violence survivors and activists were outraged that Publix had thrown its support behind Putnam in the wake of the deadly shooting at Marjory Stoneman Douglas High School in Parkland. Putnam declared himself a “proud NRA sellout” in 2017. Parkland students led by David Hogg encouraged a boycott of Publix and activists staged die-ins at its stores. In its damage control, Publix responded by halting all contributions indefinitely and internally told employees it was reviewing its political giving policies.

Well after the outcry had died down — and Putnam had lost to Ron DeSantis — Publix resumed its political contributions in 2019. In the 2020 election cycle, it gave at least $2,000 to Florida Sen. Rick Scott, who later voted against the certification of the presidential election results. Publix also contributed $50,000 to DeSantis’ political committee after the governor had urged lawmakers in other states to overturn the popular vote.

Forbes ranks the Jenkins family as one of the richest in America. As of 2020, it had a net worth of $8.8 billion, according to Forbes.

When asked about the contribution to the Jan. 6 rally, a Publix spokesperson, Maria Brous, said Fancelli is not an employee of Publix Super Markets, “and is neither involved in our business operations, nor does she represent the company in any way. We cannot comment on Mrs. Fancelli’s actions.”

Reactions to Fancelli’s donations on social media sparked a reply from the corporation, which responded from one of its Twitter accounts to one customer saying “The violence at the Capitol on Jan. 6 was a national tragedy. The deplorable actions that occurred that day do not represent the values, work or opinions of Publix Super Markets.”

Although Fancelli doesn’t hold a formal role with Publix, it’s still a company with strong ties to her family. For instance, she’s an aunt of its current chairman, William E. Crenshaw. She has also regularly done business with the chain. According to Securities and Exchange Commission filings, her company, Alma Food Imports, sold more than $5.8 million of “food products” to Publix between 2013 and 2017. Publix ceased doing business with the vendor in 2017 after Fancelli and her husband left the company.

Fancelli is a graduate of Mount Vernon Seminary in Washington and the University of Florida. In 1972, she married Mauro Adolfo Dino Fancelli, whom she met while studying abroad while at UF. He was the head of his family’s fruit and vegetable wholesale business in Florence.

According to The Ledger, the couple spend most of their time in Florence Italy and visit Lakeland Florida during holidays and winter months.

Facebook
Twitter
Email
PrevPreviousDemocrats have prevailed, but Trumpism is still here. We can’t be complacent.
NextWhat is a super spreader and is it safe to go to outdoor events?Next