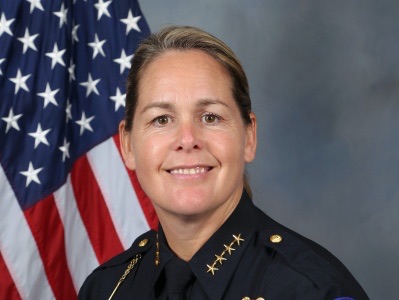 By Becky Smith and Kay Blue

Having served as a director of professional development and training in Maryland, Davis cited studies and guidance from the Police Executive Research Forum, which help guide her approach to policing and department leadership. She also says that her experiences in Maryland showed her that there could be a lot of mistrust between the police and the community. Davis noted that the local BLM protests were well planned and carried out peacefully. Since the protests, the chief and other area law enforcement officials have met with the protest organizers, NAACP, Unapologetically Black, and church leaders among others.

Body cameras and how police respond to complaints were two of the issues covered in those meetings. Davis noted that in-car cameras have been used in Punta Gorda for a decade. Officers are currently undergoing body camera training and will begin using them in the field in August. Choke holds, strangle holds, and hog-tying have been officially banned, but the chief noted there had been no documentation of their use locally in anyone’s current recollection.

Davis has put in place de-escalation procedures taken from best practices, including a use-of-force continuum based on what is necessary and appropriate given levels of resistance. There is also a duty to intervene if officers observe their colleagues using dangerous or inappropriate force. The chief requires many hours of training beyond the standard to make sure that Punta Gorda officers are well trained in de-escalation and crisis intervention strategies.

In response to COVID-19 concerns, the chief says the department is trying to handle low priority situations over the phone. Police personnel are observing social distancing in dealing with the public as much as possible, although two officers did test positive after a local traffic stop. As officers interact with citizens, they ask a set of COVID-19 questions, so they can use appropriate levels of protection. Davis also addressed Punta Gorda’s new mask ordinance, noting that one of the challenges to enforcement is that the order guidelines include eleven different exceptions that are difficult to verify without creating privacy issues. The chief and officers are therefore focusing on encouraging citizens to wear masks. She indicated, whenever possible, they do not want to issue citations and, instead,  they attempt to encourage violators to comply.

Davis says crime levels in Punta Gorda have not been out of the ordinary during the pandemic. April showed a small spike, but then in May the incidents dropped off again. Since more individuals are home and on their computers, she cautioned citizens to be on the alert for online scams and identity theft.

Throughout her presentation, the chief indicated her focus on interaction and open communication with the community. She encourages citizens to contact the police department with any concerns, observations, or suggestions. Contact information is available at the Police Department’s website: http://www.ci.punta-gorda.fl.us/government/police.

Facebook
Twitter
Email
PrevPreviousDemocrats beat Republicans on the economy, over and over
NextCelebrate original suffragists and local scholarsNext