Rally in the rain for housing and abortion rights 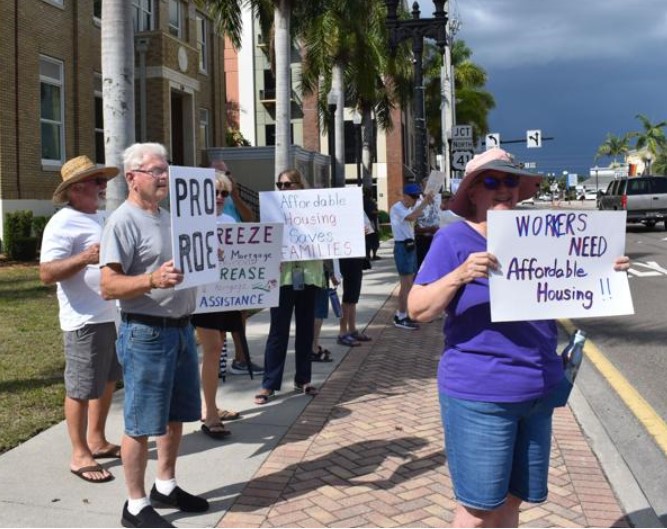 Editor’s comment: Charlotte County Democrats and allied organizations were not protesting the lack of action on affordable housing on the local level, but rather at the state level. 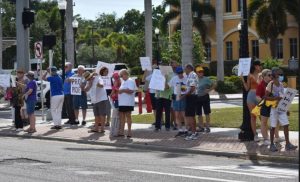 Supportive honks from passing cars were heard at the rally as chants of “Roe Can’t Go” sounded out.  SUN PHOTO BY FRANK DIFIORE

PUNTA GORDA — About 40 demonstrators set up along West Olympia Avenue on Tuesday evening, rallying for both affordable housing and abortion rights.

The rally, hosted by Charlotte County Democrats, was originally focused on frustrations with housing prices and a lack of action at the local level to provide support to working families.

A similar protest was taking place in Sarasota as well.

“You can’t have a community that prospers without workers,” said Myrna Charry, one of the protesters in Punta Gorda. “And workers need a place to live.”

Late Monday, Politico reported the Supreme Court was drafting an opinion to rule that Roe vs. Wade would be overturned. For many of the Democrats attending the rally, that set off an alarm.

The rally crowd gathered near the Historic Courthouse at Olympia and Taylor Avenue, hoisting signs that read “Pro Roe” and “Misogyny Harms More People than Abortion.”

Chants of “Roe Can’t Go!” were often met with supportive honking by the passing cars.

Attendee Cheryl Huber said that the worst response she saw was a thumbs-down.

For Huber and some older women, the matter of reproductive rights is a personal one. Huber said that while she was attending college — pre-Roe — a classmate died from complications in a “back-alley abortion.”

“I’m happy to see that this many people showed up,” said Huber, a former teacher from Pennsylvania.

Emelia Valentz, a high school junior, said she and other young people were eager to join the discussion and stand up for their freedoms. She was “disgusted” when she heard the news out of D.C., she said.

“I’ve definitely heard a lot around school,” Valentz said, but noted talking politics was often stigmatized in her community.

Another demonstrator, Connie Payne, said she couldn’t sleep after hearing the news.

“Government should not have control over women’s bodies,” Payne said.

Some lawmakers have a different view, such as U.S. Rep. Greg Steube (R-Sarasota), who called the Supreme Court’s unofficial decision “the greatest victory for the pro-life movement.”

“If the report is true, I am grateful that all of God’s children will now have a voice,” Steube stated in a tweet.

He wrote about the leak as well.

“And I am committed to ensuring that the leaker and their complicit partners in the media will be held accountable for their actions to the fullest extent.”

In a statement emailed to The Daily Sun, Charlotte County Democrats Chair Teresa Jenkins called on the Supreme Court to “recognize the will of the vast majority of Americans” and avoid “overturn(ing) settled law.”

“If this draft decision becomes law, it will not end abortion,” the statement read. “It will merely make it more difficult for our working poor to manage their families, while women with means and the ability to travel will carry on as before.”

While passion for the issue of the day was high, attendees still remained focused on affordable housing as well.

Huber relayed stories from her career in Pennsylvania, seeing families broken up when housing costs outpacing the parents’ earning power — youth services removing children from homes that were no longer affordable.

John Washburn talked about the prices he was seeing in local areas, including an average priced home of $450,000 in West Port.

“I’ve got a granddaughter who’s 24. I don’t know what she’s going to do,” Washburn said.

The demonstration went on for around 40 minutes before heavy rain began to roll in. Even as the water started dropping, however, some rally-goers maintained their position on West Olympia Avenue.

“I think what happened yesterday will ignite women across the country,” Charry said.