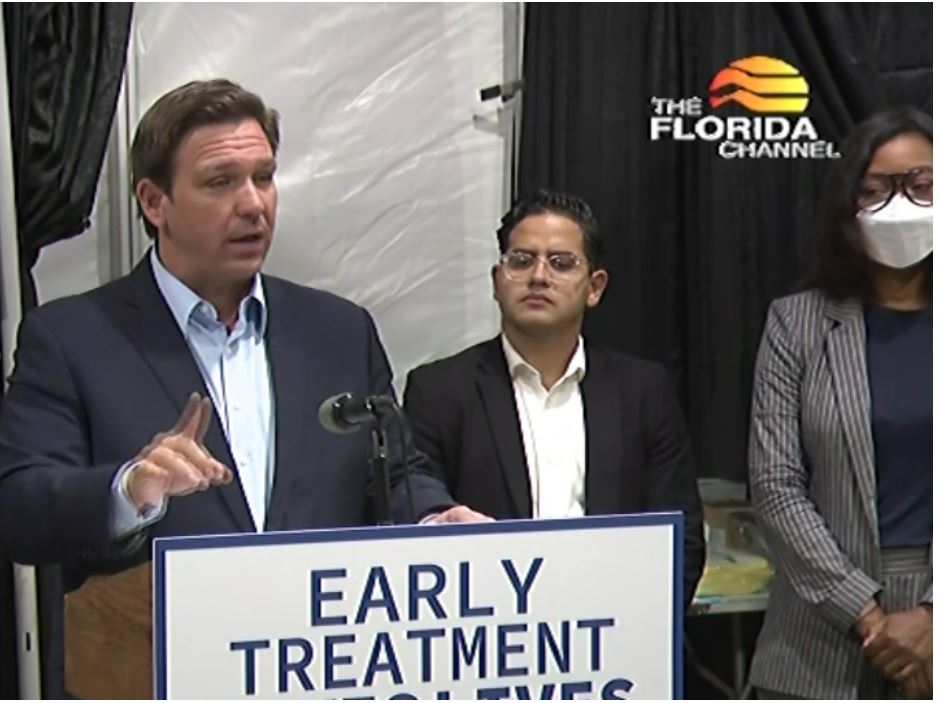 Republican governors in some of the states hardest hit by the pandemic are pushing expensive Covid cocktails over cheap masks.

The governors in Florida, Missouri and Texas are promising millions of dollars in antibody treatments for infected people even as they oppose vaccine and mask mandates, saying they can potentially keep people with mild Covid symptoms out of hospitals that are being swamped by new cases. But the treatments and cost of providing them are thousands of dollars more than preventive vaccines, and tricky to administer because they work best early in the course of an infection.

The push to medicate rankles public health officials and some within the Biden administration, who say the governors’ stance misleadingly implies Covid-19 can be treated easily, like the common cold. They note treatments like Regeneron’s antibody cocktail — which was administered to former President Donald Trump during his bout with the disease — are essential but part of a limited arsenal to keep patients from being hospitalized or dying, not a game-changer that could help end the pandemic.

“These leaders should also be promoting the best public health guidance at what we know works to protect individuals against the virus, not just treat the virus, including wearing a mask,” said an administration official who wasn’t authorized to speak on the matter.

President Joe Biden underscored the prevention point during an address on the pandemic response Wednesday, saying, “We have two key ways of protecting ourselves against Covid-19: One, safe, free and effective vaccines. And two, masks. Vaccines are the best defense but masks are helpful as well.” Biden used the occasion to require Covid-19 vaccinations for staff in federally funded nursing homes and escalate a confrontation with GOP governors over school mask mandates.

The red state officials are nonetheless forging ahead on antibody treatments. Florida’s surgeon general on Monday issued a blanket prescription for Regeneron’s cocktail so anyone in the state can receive it without a doctor’s sign off.

The federal government purchased more than 1.5 million doses of Regeneron’s treatment for roughly $2,100 per dose. The drug is free to patients though states are paying to set up and staff sites to dispense the drug.

And Missouri plans to spend $15 million in CARES Act money to open and staff at least five new infusion centers across the state.

The governors in all three states have encouraged residents to get vaccinated while downplaying the effectiveness of other mitigation measures such as masks and lockdowns and rejecting mandatory vaccinations. Abbott and Florida Gov. Ron DeSantis are in court defending their prohibition on school mask mandates, even as the two states now account for more than one-third of the nation’s Covid hospitalizations.

“It doesn’t make sense to stand in the way of science and clear public health guidance that we are getting from all non-crackpot doctors, nurses and experts in this country,” said Quinton Lucas, mayor of Kansas City, Mo. “You’re having this discussion about [infusion] centers that can be avoided if we get people vaccinated.”

The White House has urged states with low vaccination rates and surging caseloads to take advantage of these treatments, but not as a substitute for keeping people from getting sick in the first place. The antibodies are usually given in infusion centers, and the treatment can take a couple hours. Some hospitals have to set up separate sites or temporary structures to accomplish the task.

DeSantis on Wednesday said the chance of becoming severely ill is reduced if you are vaccinated, but breakthrough infections “are not rare.”

His spokesperson Christina Pushaw said the governor never intended for antibody treatments to be viewed as a substitute for vaccines and he has done dozens of events to promote the shot. She added that while people are aware of the vaccine they may not know about antibody treatments, which is why it was important for the governor to call attention to it.

“Governor DeSantis makes data-driven decisions and follows the science,” she said. “Those who criticize him for expanding access to lifesaving Covid-19 treatments are putting politics ahead of public health, and in doing so, putting lives at risk. Monoclonal antibody treatment is not and should not be a polarizing topic.”

But DeSantis has also been among the most vocal public officials insisting that concerns about the virus are overblown. He’s tangled with Biden over Covid restrictions, sued to stop cruise lines from imposing a vaccine mandate, hawked merchandise ridiculing Biden chief medical adviser Anthony Fauci and argued there is no empirical evidence to show mask mandates work to stop the spread of Covid-19 — or that the benefits of school mask mandates outweigh the potential harms.

Several studies have shown that masks limit transmission in indoor settings, and the American Academy of Pediatrics and the Centers for Disease Control and Prevention recommend face coverings inside schools, regardless of vaccination status.

But in states where vaccination rates are low and masks remain taboo, monoclonal antibodies are increasingly being looked at as the last, best hope to save the health system.

On Sunday, Mississippi state health officer Thomas Dobbs issued a standing order so that anyone in the state can receive treatment even if they don’t have a physician. Doctors in Alabama, where there are no ICU beds left, are counting on monoclonal antibodies to keep the health system afloat.

“I’m continually surprised at how few people know about it,” she said.

While most everyone agrees that these treatments are important, some public health experts worry touting them may reinforce the belief that only immunocompromised people need to get a shot or wear a mask.

Marcus Plescia, chief medical officer for the Association of State and Territorial Health Organizations, said a further concern is that people are likely to spread the virus before they realize they need treatment.

“We’re not going to end the pandemic any time soon if that’s our strategy,” he said.