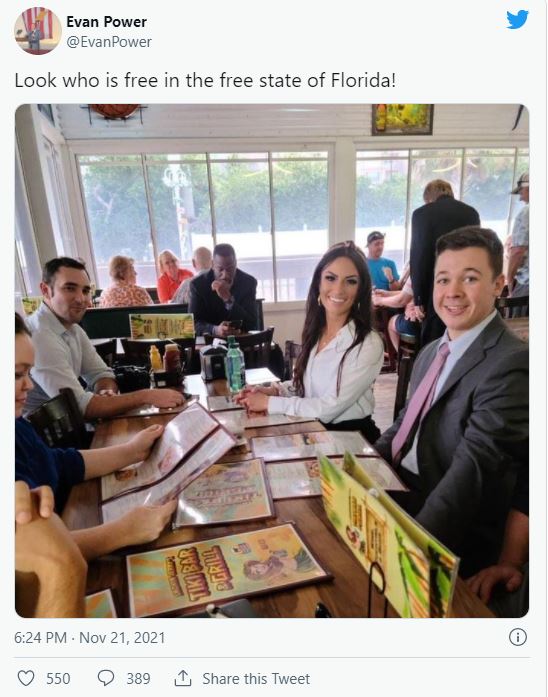 Kyle Rittenhouse was seen over the weekend checking out the rib platter at Smokin’ Jerry’s in Placida, it appears, all gussied up and grinning after his homicide acquittal.

How do we know? Because Evan Power, the Republican Party of Florida Chairman of Chairs, posted a photograph on social media, that’s how.

Who thought mugging for a picture in a Charlotte County tiki bar was a good idea?

And what, exactly, does the Chairman of Chairs do?

You know, besides chair Chairs?

Oh, yeah, and use every opportunity possible to fawn over Gov. Ron DeSantis?

“Look who is free in the free state of Florida!”

That was actually Power’s tweet accompanying the photo of Rittenhouse and several others dining at the fine smoked meat establishment in Placida, which is just south of Englewood, home of the Brothers Flynn.

Rittenhouse said he acted in self-defense. The jurors spoke. They found him not guilty. That’s how it works. And if he wants to grant Carlson an interview in Boca Grande, that’s his prerogative. If he wants to eat at Smokin’ Jerry’s, again, his choice.

But the photo was a poor choice. No matter the circumstances, he still shot three people. Two are dead. The wounds are still raw. A photo of him smiling on social media slapped many faces. It came off as a smug celebration, like when O.J. Simpson had the National Enquirer photograph a welcome home party the night of his acquittal.

Show some humility. Some respect.

And because Rittenhouse is such a polarizing figure, Power had to know any tweet of him would spark a huge reaction from both sides of the verdict. Why politicize it? Why not just post the picture and tweet something like “Kyle Rittenhouse. He sure looks hungry!”

Why? Because a generic tweet does nothing for DeSantis, the only person Power was trying to impress. Power wanted to remind the world that Florida is “free” from masks and mandates and our great governor has saved the kingdom from doom and despair once again.

You have to wonder if Power at one time kneeled before DeSantis, who then touched his shoulder and declared, “I now dub thee Chairman of Chairs!” Like a Monte Python skit or something.

Only none of this is funny. Manatee County Commission Chairwoman Vanessa Baugh did the same thing last week when she proposed the commission send DeSantis a letter thanking him for not buckling to federal mandates on employee vaccines and for “standing up to the corporate media.”

Except Baugh had a personal angle and played the other commissioners for fools. She has ethics complaints pending over the Lakewood Ranch “VaccineGate” scandal and DeSantis could eventually remove her from office.

Opinion: Baugh’s love letter to DeSantis is a disgrace

She needs to kiss the ring.

As for Power, who knows what his personal angle was.

Maybe he was just doing his job.

He is Chairman of Chairs, you know.