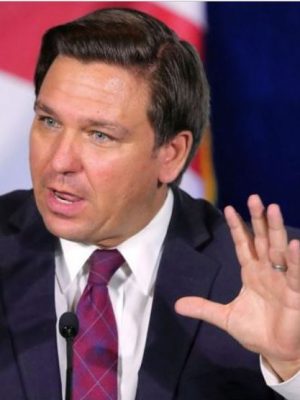 Editor’s note:  This story appeared in the September 24, 2020 issue of New York Magazine.  Charlotte County has reported over 3000 cases and 135 deaths attributed to COVID-19.

Florida governor Ron DeSantis is pushing an anti-protest bill that would shield people who use their cars to kill demonstrators from legal liability, among other provisions. The announcement comes two months after his mishandling of the coronavirus pandemic left Florida with America’s single-day infection record, with 15,299 new cases on July 12, and the second-highest infection rate of any state today, with 3,184 cases per 100,000 people. Neither development can be separated from DeSantis’s sycophantic relationship to President Trump, which has led him to de-prioritize sound governance in favor of endangering Floridians’ lives to advance the president’s political goals.

With American COVID-19 deaths surpassing 200,000 and November fast approaching, Trump has tried reframing the election as a referendum on policing and protests rather than his handling of the pandemic — and has found an eager ally in Florida’s chief executive. The idea is fairly straightforward: If voters can be frightened into believing that recent demonstrations and riots are an existential threat to suburban life and a harbinger of what a Biden presidency would bring, rather than an understandable response to police violence, Trump could successfully recast himself as the solution rather than the problem.

This dubious approach is an uphill battle in most respects. To begin with, Trump is currently presiding over the demonstrations himself, complicating his efforts to blame them on Biden. He’s also a proven accelerant to the flames of unrest: His deployment of fatigue-clad federal agents to Portland, Oregon, in an ostensible effort to quell protests, caused them to intensify and spread to other cities. This was the point, it turned out — Trump wanted to stoke chaos and blame it on local Democrats, then cast himself as the only man who could restore “law and order” to a reeling nation. But Americans remain skeptical. Earlier this month, Morning Consult found that on the subjects of race relations and public safety, voters overwhelmingly trust Biden over the president. Even wider margins separate faith in Biden’s handling of the pandemic from Trump’s, suggesting that people generally prefer a leader who doesn’t flout public-health guidelines and lie to them about the severity of epidemiological threats.

But DeSantis has made his bed. After receiving high bipartisan marks early in his tenure, the pandemic era has seen the governor’s approval ratings plummet alongside Trump’s — a fitting development, given that he has consciously entwined his fate with the president’s, with whom he communes regularlyand who was DeSantis’s highest-profile political benefactor during his gubernatorial run in 2018. Trump’s demagogic playbook helped the then-congressman eke out a narrow victory against his Black opponent, Andrew Gillum, on a platform of thinly disguised racism. But these men share more than a knack for equating Blackness with crime. Both have greeted the pandemic by downplaying its lethality, urging Americans back into public life with little resembling a plan to protect them, in the name of juicing the economy — and, by extension, casting themselves as its most effective stewards. Instead, the result has been record-setting rates of infection and death, fueled by their committed rejection of scientific counsel in the name of political expediency. From the Washington Post in July:

[The] crisis in Florida has been especially acute, infectious-disease specialists say, because politics have dictated the response at crucial junctures — never more so than with the state’s reopening, which was cast by the governor as a return to normal rather than as a new and even more precarious phase of the pandemic.

Trump told aides that Florida’s early success [at keeping infection rates low] gave other states a justification to reopen, according to three administration officials. Meanwhile, DeSantis quickly turned presidential rhetoric into gubernatorial orders, all while rejecting measures, including a statewide mask mandate and an extended stay-at-home order, that helped other states contain their outbreaks.

According to reports, this approach led DeSantis to underline misleading metrics to advance the narrative that things were going smoothly. In reality, he seemed to have largely given up on containing the virus, which was spreading rapidly, instead choosing the Trump route of spinning how it played out and hoping it would go away on its own. Again from the Post:

Officials involved in the local health and emergency response say DeSantis has selectively highlighted favorable metrics, such as a decline in the median age of people who are testing positive, rather than developing more serious mitigation strategies …

Now, with the virus spreading uncontrolled in Florida, former health officials think DeSantis has joined the president in seeking to manage expectations about its consequences rather than formulate a plan to bring it under control.

“They keep hoping it’s going to go away by itself,” said Richard Hopkins, an epidemiologist who spent 19 years at the Florida Department of Health. “I don’t know what’s going on — whether they’re afraid that they will get primaried by someone to their right if they take appropriate public health action.”

DeSantis’s salvo against protesters follows the president’s lead once again. On Monday, his office announced the Combating Violence, Disorder, and Looting and Law Enforcement Protection Act, a remarkable piece of legislative theater in a state where clashes between police and protesters have been comparatively mild, looting and rioting has been sparse, and the legal protections enjoyed by police and vigilantes are as robust as anywhere in the United States. Among other provisions, the bill would prohibit state grants or aid to local governments that reduce their law-enforcement budgets, and extend Racketeer Influenced and Corrupt Organization (RICO) Act liability to anyone who funds or organizes a “violent or disorderly assembly” — allowing protesters to be prosecuted as members of a criminal organization, like the Mafia. Among its other notable items is a prohibition on obstructing roadways as part of an unpermitted protest — which, as a bonus, also states that a “driver is NOT liable for injury or death caused if fleeing for safety from a mob.” The potential implications are chilling. With this vague wording and broader reimagining of unruly dissidents as mobsters, this provision is hard to distinguish from an open invitation to vehicular homicide.

The bill will no doubt enjoy broad support in Florida’s Republican-held legislature when it gets brought before it in 2021, as its central aim is to distract from the statehouse’s profound ineptitude. By almost any measure, DeSantis has failed to keep Floridians safe during the pandemic. But through a mix of fecklessness and political cynicism, he has succeeded at devising novel ways to get them killed, whether by failing to take anti-coronavirus safety measures seriously or promoting looser restrictions on people’s legal right to run them over with cars. He seems to believe that what helps the president helps him, too, and that mass casualties are acceptable in pursuit of this ideal.He has left little doubt that his compact with Trump supersedes his duty to Floridians. If recent months are any indication, the price will include many of their lives.