Ron DeSantis Is the Republican autopsy 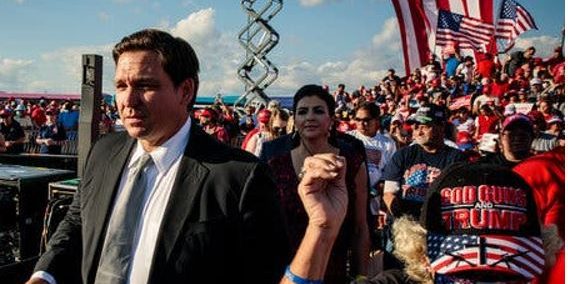 After the Republican Party suffered a surprising (well, to Republicans) defeat in the 2012 election, the Republican National Committee famously commissioned an autopsy that tried to analyze how the party had fallen short. It made a range of recommendations, but they were distilled by the headlines — and the wishful thinking of certain party elites — into a plan for the G.O.P. to win back the presidency mostly by shifting left on immigration.

Then, of course, Donald Trump came along and put that particular vision to the torch.

After Trump went down to his own defeat, it was clear that there wouldn’t be a repeat of the autopsy. Not only because the last experience ended badly, but because Trump’s narrative would not allow it: To publicly analyze what went wrong for Republicans in 2020 would be to concede that the incumbent president had somehow failed (impossible!), that Joe Biden’s victory was totally legitimate (unlikely!) and that the party somehow might need to move on from Trump himself (unthinkable!).

But just because there hasn’t been a formal reckoning, thick with focus groups and bullet points, doesn’t mean that G.O.P. elites don’t have a theory of how to fix their party’s problems in time for the next presidential cycle. It’s just that this time the theory is less a message than a man: Right now, the party’s autopsy for 2020, and its not-Trump hopes for 2024, are made flesh in the governor of Florida, Ron DeSantis.

The proximate cause of the enthusiasm for DeSantis is his handling of the pandemic, and the media’s attempted manhandling of him. When the Florida governor began reopening Florida last May, faster than some experts advised, he was cast as a feckless mini-Trump, the mayor from “Jaws” (complete with open, crowded beaches), the ultimate case study in “Florida Man” stupidity.

A year later, DeSantis is claiming vindication: His state’s Covid deaths per capita are slightly lower than the nation’s despite an aged and vulnerable population, his strategy of sealing off nursing homes while reopening schools for the fall looks like social and scientific wisdom, and his gubernatorial foils, the liberal governors cast as heroes by the press, have stumbled and fallen in various ways.

Meanwhile many media attacks on his governance have fizzled or boomeranged, most notably a “60 Minutes” hit piece that claimed to have uncovered corruption in the state’s use of the Publix supermarket for its vaccination efforts but produced no smoking gun, conspicuously edited out much of DeSantis’s rebuttal, and fell afoul of fact checkers. The governor’s public outrage in response was justified, but he must have been privately delighted, since there’s nothing that boosts the standing of a Republican politician quite like being attacked deceptively or unsuccessfully by the press.

So DeSantis has a good narrative for the Covid era — but his appeal as a post-Trump figure goes deeper than just the pandemic and its battles. The state he governs isn’t just a test case for Covid policy. It’s also been an object lesson in the adaptability of the Republican Party in the face of demographic trends that were supposed to spell its doom.

When the 2000 election famously came down to a statistical tie in Florida, many Democrats reasonably assumed that by 2020 they would be winning the state handily, thanks to its growing Hispanic population and generational turnover among Cuban-Americans, with an anti-Castro and right-wing older generation giving way to a more liberal younger one. But instead Florida’s Democrats keep falling short of power, and the Republicans keep finding new ways to win, culminating in 2020, when the Trump-led G.O.P. made dramatic inroads with Hispanics in Miami-Dade County and took the state with relative ease.

DeSantis’s career has been a distillation of this Florida-Republican adaptability. Born in Jacksonville, he went from being a double-Ivy Leaguer (Yale and Harvard Law) to a Tea Party congressman to a zealous Trump defender who won the president’s endorsement for his gubernatorial campaign. A steady march rightward, it would seem — except that after winning an extremely narrow victory over Andrew Gillum in 2018, DeSantis then swung back to the center, with educational and environmental initiatives and African-American outreach that earned him 60 percent approval ratings in his first year in office.

Combine that moderate swing with the combative persona DeSantis has developed during the pandemic, and you can see a model for post-Trump Republicanism that might — might — be able to hold the party’s base while broadening the G.O.P.’s appeal. You can think of it as a series of careful two-steps. Raise teacher’s salaries while denouncing critical race theory and left-wing indoctrination. Spend money on conservation and climate change mitigation through a program that carefully doesn’t mention climate change itself. Choose a Latina running mate while backing E-Verify laws. Welcome conflict with the press but try to make sure you’re on favorable ground.

This is not exactly the kind of Republicanism that the party’s donor class wanted back in 2012: DeSantis is to their right on immigration and social issues, and arguably to their left on spending. But the trauma of Trumpism has taught the G.O.P. elite that some compromise with base politics is inevitable, and right now DeSantis seems like the safest version of that compromise — Trump-y when necessary, but not Trump-y all the time.

Of course, all of this means that he may soon attract the ire of a certain former president, who has zero interest in someone besides himself being the party front-runner for 2024. And the idea that a non-Trump front-runner could be anointed early and actually win seems at odds with everything we’ve seen from the G.O.P. recently.

Then, too, having the press as your constant foil and enemy isn’t necessarily a plus if they manage to come up with something genuinely damaging. There is a resemblance between DeSantis and Chris Christie, who looked like a 2016 front-runner before certain difficulties involving a bridge intervened.

Still, if you were betting on someone who could theoretically run against Trump, mano a mano, and not simply get squashed, I would put DeSantis ahead of both the defeated Trump rivals (meaning Marco Rubio or Ted Cruz) and the loyal Trump subordinates (meaning Mike Pence or Nikki Haley). Not least because in a party that values performative masculinity, the Florida governor’s odd jock-nerd energy and prickly aggression are qualities Trump hasn’t faced before.

The donor-class hope that Trump will simply fade away still seems naïve. But the donors circling DeSantis at least seem to have learned one important lesson from 2016: If you want voters to say no to Donald Trump, you need to figure out, in a clear and early way, the candidate to whom you want them to say yes.