Rubio’s fake populism is no match for real history 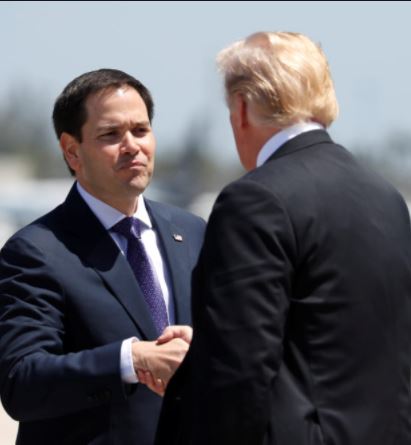 Sean Wilentz teaches at Princeton University and is the author of, among other books, “The Rise of American Democracy: Jefferson to Lincoln.”

“I’m not a scientist, man,” Sen. Marco Rubio (R-Fla.) once told an interviewer. He was evading a question about creationism and how old planet Earth is. “I don’t think I’m qualified to answer a question like that,” he said.

Now Rubio has disclosed that he’s no historian, either.

The senator, up for reelection, has adopted a familiar tactic by expressing his contempt for American historians who recently met with President Biden to put current events into historical perspective. According to Rubio, those in attendance, including myself, are “elitists” and “snobs.” According to his account of our conversation, for which he obviously was not present, we urged the president to stop allowing “working everyday people and their common sense” to “play a role in our decision-making.”

In fact, much of the historical discussion with the president involved exactly the opposite, including how to address issues that affect the hard-working American majority and how to overcome polarization.

Historians have long chronicled the deliberate manipulation and falsification of events for political purposes. Rubio’s version of what happened in the meeting stands in the sorry tradition of the great propagandists. He maligns independent thinkers and fabricates what they say to depict them as enemies of the people.

The danger is twofold. Rubio has contributed to a culture of fakery for easy political profit that plays upon suspicion and fuels the current atmosphere of incitement.

Secondly, Rubio strikes at the very idea of American history itself. What makes studying the history of the American people “elitist”? And why wouldn’t we want all our presidents to seek a stronger grasp of the past as they wrestle with our future?

Theodore Roosevelt and Woodrow Wilson, of course, were historians. Ronald Reagan brought historians into the White House, as have most other presidents going back at least to John F. Kennedy, who also wrote history. George H.W. Bush made himself, his family, his diary and his papers available to one of the historians who was at the Biden session. George W. Bush has long been an avid reader of presidential biographies.

Rubio’s contempt for historians and his predictable attempt to stir up hostility against them are part of a long American fake populist tradition of vilifying intellect, a tradition that infects our politics with reliable frequency. It extends from the Anti-Masons and the Know-Nothings of the 19th century through Father Charles Coughlin and McCarthyism in the 20th century to Donald Trump today.

For the present-day GOP, it has become standard operating procedure.

Real American populism began with working everyday people, mostly farmers, in the fight of their lives against railroad tycoons, banker plutocrats and land-speculating moguls. It aimed to use the federal government to contain and regulate their exorbitant private power.

Fake populism, a craft that Rubio is clearly trying to master, distracts attention from the abuses of corrupt politicians and plutocrats by manufacturing imaginary threats both at home and abroad while projecting cooler heads as elitists.

Down through our history, the fake populists have always maligned teachers, professors and intellectuals of every kind as well as journalists and various other groups, ethnic, racial and professional.

In the 1950s, Joe McCarthy smeared everyone outside the right wing as elitist subversives, including Gen. George C. Marshall. Segregationist governor George C. Wallace of Alabama raised a following in part by attacking “pointy heads” and “longhairs.”

Common sense tells you that’s a hypocritical con game, but the fake populists run that play over and over because they assume the people are too dumb to catch on.

It doesn’t take much to see the imminent perils facing American democracy. They come from those who planned, abetted, whipped up and participated in the attack on the Capitol on Jan. 6, 2021. That peril is deepened by those who encourage violence against the FBI for a perfectly legal search for secret national security documents at Mar-a-Lago.

History shows that fake populism and anti-intellectualism — with, as a byproduct, targeting independent thought — are necessary ingredients of an authoritarian takeover. We can expect to hear much more of it from Rubio and the rest of the Republican Party, now that they have crossed the line from cowardly complicity to active support.