Should Punta Gorda’s Airport Authority commissioners have a say in their own election method?

Editor’s note: What do Mike Grant, our FL state representative and his daughter, Vanessa Oliver, truly have in mind for our airport?  Who knows?  In late 2020, both supported moves to privatize the airport, as well as initiatives to move from our current five district representation to “at-large” elections.  This is a local government hotbed that deserves our attention.

In a 4-1 vote, the board set in motion re-establishing a February 2021 resolution that supports its current requirement of one commissioner from each of the county’s five districts.

At Thursday’s meeting, Commissioner Rob Hancik warned that Grant could raise the issue again at the Nov. 10 meeting of the legislative delegation.

“I think we need to be prepared,” Hancik said. “In anticipation that he (Grant) is probably going to try it again — I don’t know if he is or not other than his statement (at the February legislative meeting) that he would do so.

“I think we should establish a resolution, as we have in the past, on what our position is about changing the structure of the Airport Authority.”

The February 2021 resolution, which was also approved 4-1, established the authority’s opposition to eliminating single-member districts to make way for at-large commissioners and supported maintaining their current geographical representation.

Commissioner Vanessa Oliver, Grant’s daughter, opposed the idea of bringing the new resolution before the authority, calling it “a little presumptuous.” 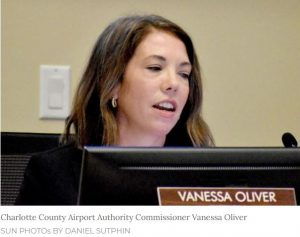 “I would hate for this airport commission to make a decision about future resolutions when the timing is not appropriate,” Oliver said. “There’s nothing on the table (for the November delegation). There’s been no agenda produced and no recommendations made.

“Unless we want to come across this (as) a little jumpy, a little presumptuous,” she continued, “I think we should probably wait and see what is proposed before deciding that we are adamantly opposed to everything.”

Oliver also thought it would be wrong of the board to make decisions about its own election process.

“It’s highly inappropriate for this board, which is a mutual government authority, to take a political position as it relates to the method in which we are elected,” she said. “If we want to present our own opinions, I think that is fine to do as individual citizens.

“It does not affect the airport, it just affects us as commissioners and us politically,” she added. “It’s a political matter, let’s be clear about this.”

The new resolution still has to be brought back before airport commissioners at a future meeting before anything official is in place.

A proposal to seek new legal counsel for the Charlotte County Airport Authority was shot down Thursday without even a vote.

Commissioner Vanessa Oliver had made the motion, saying lucrative contracts to area law firms deserve to go out for bid.

“This is important for transparency and accountability to put this out for bid,” she said. “It’s good governance.”

Her motion died without receiving a second from other authority members.

Attorney Darol Carr has been serving the authority since March 2017.

Oliver was concerned that an actual contract for those services was not available.

“I think this is another instance where we must have lost the contract because when I asked for all the copies of the contracts that we have for professional services, all I got was a barely two-page letter (acknowledging Carr’s) selection,” she said. “I did not see an actual contract signed by the authority and the (Farr Law Firm) to perform the services.”

Punta Gorda Airport CEO James Parish said that’s how they have “proceeded in the past.”

“The board’s policy has been to hire an attorney and stick with them until such time that we are not happy with them or they decide to resign or retire,” he said.