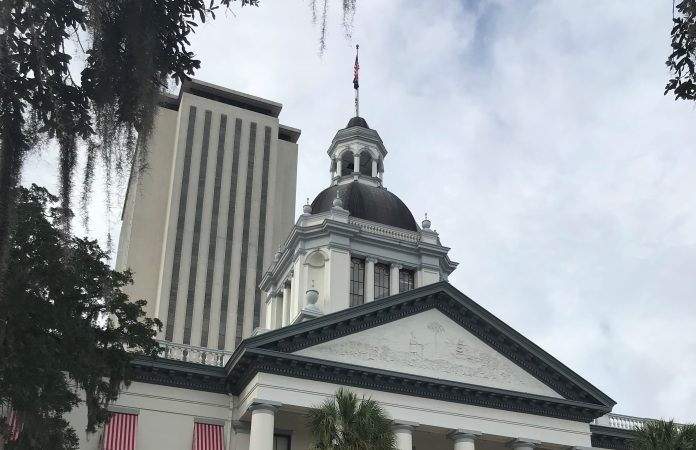 Florida officials may get new tools to silence dissent and prevent demonstrations at the State Capitol under new freedom of speech rules proposed by the Department of Management Services, the agency that serves as the state’s property manager.

DMS wants to empower law enforcement to remove individuals they think may prove disruptive from traditional public forum arenas — such as the fourth floor rotunda separating the Florida House and Senate chambers, and the Capitol Courtyard.

The Florida ACLU warns, as currently written, the proposed rules are a how-to guide to chill political speech.

New rules would have prohibited past Capitol protests

The proposed rewrite states that, “Because the Capitol Complex is often a destination for children learning about their State government,” individuals can be removed from the premises and charged with trespassing when law enforcement believes:

The proposal would have enabled officials to block 2022 protesters from gathering outside of the House and Senate Chambers to chant “gay, gay, gay,” while lawmakers arrived to debate an education bill, and pranksters who celebrated the end of session by littering the rotunda with DeSantis dollars to highlight corporate tax cuts lawmakers approved.

The Legislature Joint Administrative Procedures Committee, made up of five senators and seven representatives, oversees how executive branch agencies exercise the authority lawmakers have delegated to them.

It sought clarification of what DMS was trying to do with changes to Rule 60H-6.008.

“… for example, a demonstration on the steps of the Old Capitol could be forced to disband if someone adjudged that the activity was disrupting the functions of employees in the Capitol. Is this what was intended?” Sharon Jones, the committee’s chief attorney asked DMS in a letter dated Oct. 24.

In responding, DMS assistant General Counsel Rebecca McGinn assured Jones the proposed limits and prohibitions on speech did not infringe on any constitutional rights because the Capitol grounds are “limited public forums,” where restrictions on speech is permitted.

McGinn added the rule changes were needed to shield school children from obscene or harmful materials.

When asked by the lawmakers’ attorney if there was a traditional public forum on the Capitol grounds not visited by children, DMS did not respond. With the Legislature in post-election transition, no lawmaker is currently assigned to the committee and committee staff declined to answer any non-procedural related questions for this article.

The language concerns the ACLU, which worries that the new language gives law enforcement the ability to remove individuals they think may become disruptive.

The First Amendment rights group has 180,000 members in Florida.

What will be allowed at the Florida Capitol? ‘No average person” could figure it out

They find the proposal so poorly written that their attorneys believe no average person will be able to figure out what behavior is permissible and where, when they want to petition the seat of government.

“It’ll be on the Capitol Police and those enforcing the rules to make the determination,” said Kara Gross, legislative director and senior policy counsel of ACLU Florida.

“And they will have the unbridled discretion to determine which speech is  permissible and to remove people if they think (protestors) might be disruptive in the future,” said Gross.

Gross recites a list of Florida protests that are part of Capitol lore which a new rule 60H could have been used to prevent.

They include 1960s protests against segregation, memorialized on the sidewalk along Pensacola Street, across from the Capitol, along with:

“The right to protest and criticize government is crucial to a functioning democracy and has historically and recently been exercised to bring about meaningful change to Florida,” the ACLU’s Gross wrote to DMS Secretary Pedro Allende.

DMS did not respond to requests for comment for this article.

New limitations on rallies, demonstrations could go into effect in early 2023

The agency has a Jan. 16 deadline to file a request for a committee of lawmakers to certify to the Department of State all requirements for rule adoption have been met.

If DMS makes the filing, the rule goes into effect 20 days after the state receives certification.

Meanwhile, the ACLU seeks to delay implementation with a request for DMS to schedule a public hearing and rewrite the proposal. Such a move would also open up an additional 45-day window for public comment.

The group finds DMS’ use of terms such as “likely to impede or disrupt,” or “create loud or unusual noise,” provide officials with unconstitutional authority to remove people from the Capitol.

“This is part of a larger concerted effort we’ve seen over the past couple of years to censor speech, that those in power don’t want to hear,” said Gross.

DMS has yet to respond to the ACLU request for a hearing.

James Call is a member of the USA TODAY NETWORK-Florida Capital Bureau. He can be reached at jcall@tallahassee.com. Follow on him Twitter: @CallTallahassee