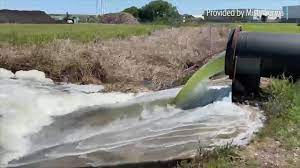 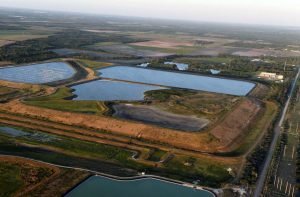 Piney Point in Manatee County, just south of Tampa, is a small mountain of waste phosphogypsum called a “gypstack,” with earthwork berm-retained lakes on top for settling out the waste phosphogypsum, and recycling the acidic process fluids used in fertilizer manufacturing.  The current spill is just the latest in a string  of disasters and near-disasters associated with Florida’s phosphate fertilizer industry.  The barely-controlled discharge of more than 200 million gallons has, by some estimates, inserted 150 metric tons of nitrogen, the region’s most powerful nutrient pollutant, into the Tampa Bay ecosystem.

The cell (lake) that was pumped into Tampa Bay was the “good” cell—it had been nearly empty until FDEP acquired the Piney Point property in 2001, and subsequent operations by HRK Holdings, which was allowed to purchase the property for use as a landfill in 2006, had refilled the cell with material somewhat more benign than typical process fluids found in the cells atop other gypstacks, where fertilizer plants are still humming away.  Time will tell how bad this spill may have been, as the nutrients are assimilated into the Tampa Bay ecosystem and fuel explosive blooms of potentially harmful algae.

The other two cells atop Piney Point are still filled with lethal process fluids.  Remarkably, after 15 years of rainfall and motley attempts by FDEP to accelerate evaporation, the fluids remain as hazardous as they were the day they were pumped up there, even though the fertilizer plant has been dismantled and scrapped for over a decade.

There are 23 other gypstacks in Florida, most of them larger, and some much larger, than Piney Point.  They are scattered throughout the “Bone Valley,” so named because of thick deposits of fossilized, phosphate-rich marine life.  Hillsborough, Polk and Hardee counties have been and are being extensively mined (>50% of the counties’ land area), and Manatee has been moderately mined (<10%). Several of the other stacks have experienced catastrophes, none more so than the two stacks at New Wales, which have breached and developed two sinkholes since 1994.  The latest, in 2016, also made international news, but since the spill went straight underground into the Floridan Aquifer—a major drinking water source—the news died down soon after the sinkhole was filled and closed.  Out of sight, out of mind.

Today Mosaic is back to pumping process fluids onto the south stack at New Wales, and asking FDEP for a permit to expand the footprint of that stack by more than 100 acres.  FDEP’s own John Coates has said, “That stack should never have been permitted there.”