The GOP bets on resentment over problem solving 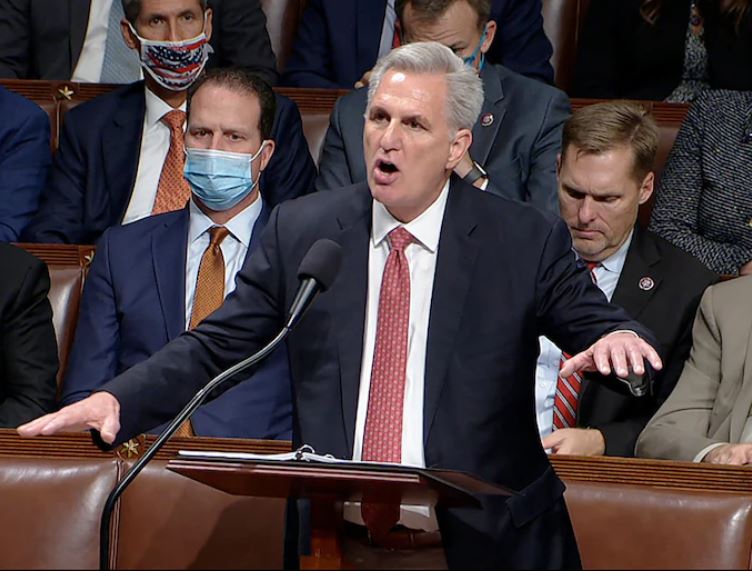 The leaders of both parties in the House of Representatives offered the nation an important lesson last week about why our politics are broken and our national mood is so surly.

The master class was taught inadvertently by Minority Leader Kevin McCarthy (R-Calif.) and somewhat more consciously by House Speaker Nancy Pelosi (D-Calif.). Their closing speeches on the Build Back Better bill passed by the House on Friday illustrates how our political parties are not even in the same business anymore.

The Republican enterprise is devoted to stoking anger and social resentment, not to enacting legislation. Democrats may take an eternity to do it, but they actually want to pass bills, create programs and spotlight day-to-day concerns (child care, health care) that government can plausibly address.

McCarthy’s 8 ½-hour rant reflected his need to mollify the GOP’s large right wing with a protracted, nihilistic scream of opposition, even if “some of his claims,” as The Post’s Marianna Sotomayor, Paul Kane and Jacqueline Alemany wrote, “wildly defied the facts.”

His marathon of negativity capped a week in which just two House Republicans joined Democrats in voting to censure Rep. Paul A. Gosar (R-Ariz.) for tweeting an anime video that depicted him killing Rep. Alexandria Ocasio-Cortez (D-N.Y.).

The party’s collective refusal to draw a line against such odiousness speaks to a degree of extremism that is partly obscured by the willingness of a small number of Republicans, particularly in the Senate, to work with Democrats on a handful of issues.

The GOP now focuses on undermining our electoral system and stoking division across racial lines. In pursuit of these goals, Republicans are willing to tolerate and apologize for right-wing violence and intimations of violence by the likes of Gosar.

In her brief speech before the bill finally won House approval Friday morning, Pelosi tweaked the Republican leader for his bombast — “as a courtesy to my colleagues, I will be brief,” she said to applause. But her emphasis was on the sweeping legislation’s specifics: bringing down the costs of insulin, cutting child-care costs “fully in half for most families,” “universal pre-K for every 3- and 4-year old in America,” “high-quality home health care.”

The vogue is to say that none of the historic measures Democrats are trying to enact (or have already in the case of roads, transit and broadband) will be of much help to them in next year’s elections, or do much to lift President Biden’s poll numbers.

We’ll see soon enough. But it’s true that the radically different nature of the two parties tilts the scales heavily against a serious, substantive debate over how and when public action can improve lives.

If politics is defined as nothing but the one big culture war that so many Republicans embrace, the practical work of government becomes a mere sideshow. One result: Any Republican willing to work with Democrats to solve particular problems (say, collapsing bridges) becomes a traitor in the only conflict that matters.

You can say this for McCarthy: His actions suggest he is fully aware that the dominance of a resentment narrative serves the GOP’s interest.

The Pew Research Center’s latest edition of its always-enlightening typology of the American electorate shows that moving politics away from bread-and-butter economic concerns is the best way for Republicans to hold their supporters together.

Two of the party’s four key coalition groups (Pew labels them “Faith and Flag Conservatives” and “Committed Conservatives”) are conservative across the board and welcome the party’s opposition to Democrats’ government initiatives. So does a third group, the “Ambivalent Right,” which though more moderate on issues such as abortion, immigration and same-sex marriage, is also skeptical of larger government.

But Pew characterizes nearly a quarter of the GOP’s supporters as the “Populist Right,” hard-liners on immigration who are also “highly critical of the economic system.” If politics ever became more about economics than culture, the party’s hold on many in this group could become tenuous.

But here is the most disturbing Pew finding: “Perhaps no issue is more divisive than racial injustice in the U.S.”

This gulf on one of the central questions facing our nation suggests that, for now at least, Republicans have a powerful interest in keeping a politics of resentment alive. The angry divisions over Friday’s verdict in the Kyle Rittenhouse case — and the facts of the case itself — are the latest example of why the country needs less of this kind of politics, not more.