The last two Lt. Governors with education backgrounds were GOP; the next should be a powerhouse Democrat 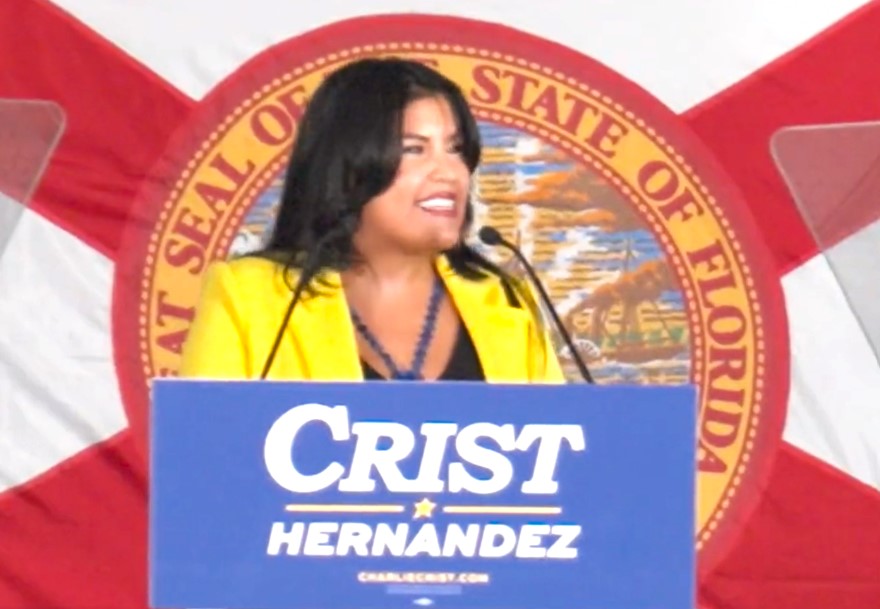 The last two lieutenant governors with an education background were Republicans. This time, it could be a Democrat.

In fact, Hernández-Mats could become the first Democratic lieutenant governor in Florida with an extensive education background.

At a time where public school classrooms have become a tumultuous political arena, who winds up as second in command in the executive office could have an impact on future education policies, especially if the lieutenant governor is an educator with on-the-ground knowledge.

“I think what’s also really powerful about this pick … is this idea that education is going to be a key issue in this election,” said Andrew Spar, president of the statewide teacher union called the Florida Education Association.

Keep in mind that Crist himself was a former Education Commissioner, from January 2001 to 2003.

Crist’s choice in Hernández-Mats reflects the raging political fire that is occurring in Florida classrooms, as Gov. Ron DeSantis and other Republicans have turned public education into an arena to divide school communities and act out their conservative priorities.

Some teachers appreciate the policies DeSantis’ has put forward, but other feel they are not being appreciated or respected by the governor.

From limiting classroom instruction on race and American history, banning certain discussions of LGBTQ+ matters and attempting to influence locally elected school boards, DeSantis has played a role in moving the political spotlight onto education.

And that’s been just the K-12 system. The DeSantis administration has made major changes to higher education as well, including implementing five-year performance reviews for tenured professors and putting out a poorly-responded survey measuring so-called “intellectual freedom and viewpoint diversity.”

Andrew Gothard, president of the United Faculty of Florida, stressed the importance of having someone in the lieutenant governor’s office who is familiar with today’s political climate in education.

“While we’ve had previous leaders who had experience in education in these kinds of positions, it’s really important that we have a lieutenant governor now who knows the day-to-day working and learning conditions are for Florida’s K-12 and university and college students,” Gothard said. “Because we’re seeing a lot of really punitive policies coming down from Governor DeSantis and his supporters. We’re seeing a lot of attempts to punish local students and local faculty for just trying to do their jobs.”

But with about two months out from the general election, Crist will have to convince Floridians to support his education policies instead of DeSantis’ agenda.

Which is where his lieutenant governor pick comes in.

Karla Hernández-Mats is currently the president of the United Teachers of Dade, a teacher union representing educators in the Miami-Dade County School District. She is a first-generation American of Honduran descent and taught in Florida classrooms for more than 10 years, according to her bio on the American Federation of Teachers website.

She also speaks Spanish, which is a big benefit in the goal of reaching as many Floridians as possible.

“This is the perfect role for her,” Rep. Kevin Chambliss told the Phoenix. He is a Democrat who represents part of Miami-Dade County and said that he interacted with Hernández-Mats as a congressional aide before he was a state representative.

He discussed the union pushing back on the DeSantis administration’s COVID policies, such as reopening schools amid a then-novel pandemic or whether parents or districts could decide if students could wear masks at school.

“And it is a perfect tool in the Crist-Hernández campaign arsenal to push back against some of this education rhetoric that you hear from the DeSantis campaign. Because she’s been fighting that fight over the last half-decade as president of the teacher union,” Chambliss said.

Almost as soon as her lieutenant government candidacy was announced, the Florida Republican Party began attacking her, saying that Crist’s choice of a “radical left-wing teachers’ union boss as his running mate is a slap in the face to Florida families” and claiming she “mourned” the death of Cuban dictator Fidel Castro based on a tweet she posted when he died.

The GOP also claimed that Hernández-Mats “protected a sexual predator for years and accompanied him through numerous investigations into his sexual assaults of multiple students at a Miami-Dade middle school,” in a press release earlier this week.

The situation involved a former UTD member who had been jailed for sexually assaulting students. In a written statement to the Phoenix, the Crist campaign called the claim “a lie” and put the responsibility of vetting and firing teachers onto the local school board, not the teacher union.

Some of her supporters suspect she can take the heat.

Spar also spoke on her tenacity and ability to communicate as a plus in her candidacy for lieutenant governor.

“Ms. Hernández is someone who is a powerhouse in how she can speak to individuals and really communicate with everyday families and workers in the state of Florida. And so I think that’s a valuable asset that she brings to the table. She is a fighter. She is incredibly intelligent.”

In recent Florida history, there have been two lieutenant governors who previously had experience working in a classroom and seeing how the Florida education system works at a personal level.

Both served under Gov. Jeb Bush’s administration, and both were Republicans.

Frank Brogan served as Gov. Bush’s second hand from 1999-03, but before that, he was the superintendent of Martin County schools from 1988 through 1994. He also was an elementary school teacher from 1978 to 1983, along with other education-based efforts, according to a resume.

Toni Jennings was appointed Florida’s first female lieutenant governor from 2003 through early 2007 and served as president of the Florida Senate in 1996-2000.

But she also started out as an elementary school teacher in Orange County, according to the Orange County Public Schools website.

Rep. Chambliss says that the role of the lieutenant governor often reflects the priorities of the sitting governor, and that Crist is implementing a similar strategy in picking Hernández -Mats that Bush had when appointing Brogan and Jennings.

“He (Bush) focused, and does a lot of work, in the educational field — many times in support of private schools and charters,” Chambliss said. “That kind of agenda was a part of his agenda already, so having someone with that background may make sense there.”