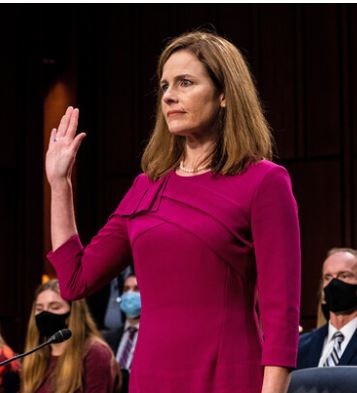 The opening day of Judge Amy Coney Barrett’s confirmation hearing showed the very different problems that her nomination creates for each political party.

For Democrats, the problem is one of political power. So long as at least 50 of the 53 Republican senators favor her confirmation to the Supreme Court — and are healthy enough to show up and vote for it — Democrats can’t do much to stop them. Currently, at least 51 Republican senators appear to favor confirming her.

For Republicans, the problem is one of political popularity. Almost every major legal change that might reasonably result from Barrett’s confirmation appears to be unpopular with a majority of Americans.

Abortion. Barrett has said she favors overturning Roe v. Wade, and she might well provide the fifth vote on the court to do so. Public opinion on abortion is more complex than progressives sometimes suggest: 66 percent of women and 74 percent of men favor at least some restrictions, according to Gallup.

But the current law already allows some restrictions. And only about one in three Americans favors overturning Roe. Even fewer favor an outright ban on abortion, which the demise of Roe would permit. This explains why Vice President Mike Pence tried to duck this issue during last week’s debate.

Same-sex marriage. More than 60 percent of Americans favor same-sex marriage, polls show. Barrett has signaled skepticism about it, which means she could provide a fifth vote to overturn the 2015 decision establishing a national right to it. Last week, two justices, Samuel Alito and Clarence Thomas, suggested the court revisit that decision.

The climate. The rise of extreme weather linked to climate change seems to be worrying Americans. A recent Pew poll found that 65 percent want the federal government to do more to address climate change, and 80 percent favor tougher restrictions on power-plant emissions.

Barrett’s views on these issues are not clear. But if she is as conservative on them as she is on almost every other issue, she could become the swing vote that overturns a 5-to-4 decision from 2007 that gave the federal government the right to regulate carbon dioxide emissions.

Health care. This was the issue that Democrats emphasized in yesterday’s hearing. In 2012, the Supreme Court upheld the Affordable Care Act by a 5-to-4 vote, with Ruth Bader Ginsburg in the majority. If Barrett replaces Ginsburg, she would become the swing vote on a case that could cause 21 million Americans to lose their health insurance. Barrett has criticized the 2012 ruling. Polls show that most people want the law to remain in place.

No wonder, then, that Republican senators tried yesterday to talk about almost anything other than the potential impact of Barrett’s confirmation — be it her impressive résumé, her Catholic faith or her appealing family.

The country is in the middle of an election, and the Republican senators are well aware of the poll results I’ve explained here. The senators also know they have the votes to do what they want.