The radical reign of Clarence Thomas 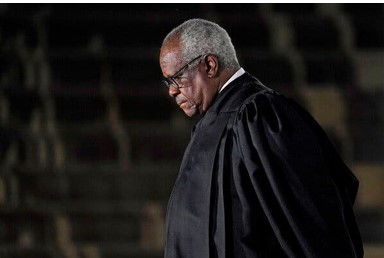 WASHINGTON — “What is happening here?” a distraught Nancy Pelosi asked on Friday.

It’s a good question and I can answer it, because I was there at the start of the corrosive chain of events that led to women losing control of their own bodies. I saw how America went from a beacon of modernity to a benighted outlier.

Over the last three decades, I have witnessed a dismal saga of opportunism, fanaticism, mendacity, concupiscence, hypocrisy and cowardice. This is a story about men gaining power by trading away something that meant little to them compared with their own stature: the rights of women.

It started innocently enough on a beautiful summer day in Kennebunkport, with the ocean sparkling and a lunch of crab meat salad and English muffins.

I was covering the first President Bush’s nomination of a 43-year-old U.S. appeals court judge for the D.C. Circuit to take the seat of retiring Justice Thurgood Marshall. Clarence Thomas, standing in front of a weather-beaten shingled cottage, looked uneasy as Bush defended his conservative choice.

The warnings were clear even then. Democratic Senator Howard Metzenbaum of Ohio threatened to investigate Judge Thomas’s record on abortion, saying, “I will not support yet another Reagan-Bush Supreme Court nominee who remains silent on a woman’s right to choose and then ascends to the court to weaken that right.”

Thomas was a far cry from the liberal lion and civil rights hero Marshall. He opposed affirmative action, even though it contributed to his rise, and he was championed by anti-abortion activists, who were confident that he would weaken a woman’s right to choose.

H.W. and his father were New England Episcopalians with a proud history of supporting Planned Parenthood. Prescott Bush had been an early supporter in the ’40s and once served as a treasurer of a fund-raising campaign. As a Texas congressman, H.W. was christened “Rubbers” by his colleagues because he was such a cheerleader for family planning in the United States and around the world.

But when Bush joined Ronald Reagan on the ticket in 1980, he adopted Reagan’s more restrictive position. The right remained suspicious of Bush, though, and hoping to bring it around for his re-election, he appointed the ultraconservative Thomas. He also wanted to appeal to Black voters, still angry at the Willie Horton ugliness that had helped propel him to the White House.

Women’s rights had to take a back seat to re-election.

Three months later, Anita Hill told her story to Congress about her boss, Thomas, tormenting her with unwanted attention and dirty talk about the pornographic films he liked to watch. Joe Biden was the chairman of those Senate hearings.

He let Hill be viciously ripped apart by Republicans and then abruptly ended the hearings, canceling the appearance of her two corroborating witnesses. Many senators on the committee — composed entirely of white men — privately thought it was an office romance gone wrong. Poor guy, they said among themselves, no point in letting his life be ruined by someone they thought, with absolutely no evidence, was a vengeful ex. Hill was smeared as a perjuring erotomaniac, and Biden, wasting a Democratic Senate majority, allowed a liar, a pervert and a sexual harasser to be elevated to a lifetime seat on the court.

Women’s rights had to take a back seat to Biden’s desire to foster bipartisanship with his conservative colleagues. And with Thomas, those conservatives got the justice of their dreams, the first in a line of right-wing radicals.

When Donald Trump came along, trailing a history of lurid sexual transgressions, the family-values Republicans and religious right didn’t care. They knew he was the one who could bring them to Valhalla on the Supreme Court.

Mitch McConnell and his Federalist Society minions used Trump as the host body. After wrecking the rules to keep Merrick Garland off the court, McConnell jammed through Amy Coney Barrett. Trump, who had once been a pro-choice, Nancy-and-Hillary-and-Chuck loving Democrat, was happy to flip to gain the fervor of an anti-abortion base.

Women’s rights had to take a back seat to Trump’s ego and ambition and McConnell’s desire for a conservative court that would pull back the reach of the government, denying protections to Americans who need or value them. They pushed through three conservative justices — one had to defend himself against sexual assault charges and one was in a weird “Handmaid’s Tale”-style sect — and that was checkmate for Roe.

Neil Gorsuch and another Trump appointee, Brett Kavanaugh, are now facing accusations from senators that they dissembled to get on the court and played down their intentions to throw out Roe. “I am a don’t-rock-the-boat kind of judge,” Kavanaugh told Susan Collins, according to The Times’s Carl Hulse.

Back when Thomas’s nomination ran into resistance, the Bush administration sold him as a sterling example of a Black man who had pulled himself up from rough beginnings. That day in Kennebunkport, Thomas talked about being raised by his grandparents, sharecroppers from rural Georgia.

But on the court he has been cruel, pushing opinions that would grind down the poor and underprivileged.

While his wife ran around helping Trump with his coup, Thomas was the senior firebrand in a coup of extremists on the court. They yanked power away from John Roberts and are defying the majority will in this country in ways that are terrifying.

On Thursday, in the middle of an epidemic of mass shootings, with Congress finally getting a mild victory on gun control, Thomas opened the door to more guns on the street. He wrote the majority opinion overturning a New York law limiting the right to carry a handgun in public, throwing out a requirement over a century old.

In another ruling this past week, the justices chipped away at the First Amendment’s separation between church and state, a foundation of the Republic. And next, they will get around to removing environmental protections and gutting the government’s ability to regulate and restrict business rights.

The court is out of control. We feel powerless to do anything about it. Clarence Thomas, of all people, has helped lead us to where we are, with unaccountable extremists dictating how we live. And that is revolting.