The Republican con on the debt ceiling 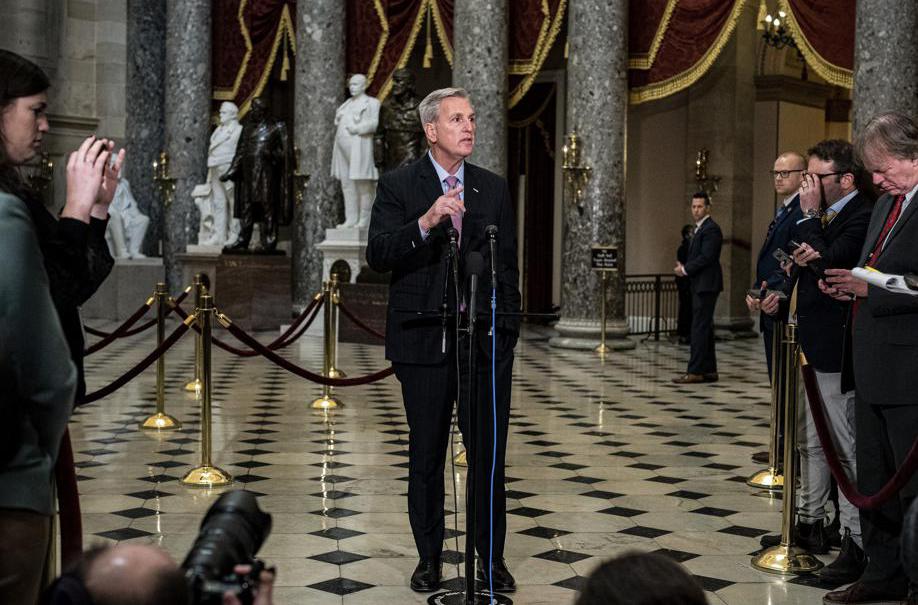 The House Republican plan for the debt ceiling is about protecting the wealthy and the well-connected from paying their fair share in taxes — nothing more and nothing less.

House Speaker Kevin McCarthy and extremist Republicans are running a con game. They claim their plan to use the debt ceiling to trigger global economic chaos is about fiscal responsibility. It’s not. The House Republican plan for the debt ceiling is about protecting the wealthy and the well-connected from paying their fair share in taxes — nothing more and nothing less.

The United States has already exceeded the debt limit. While the US Treasury takes extraordinary measures to stave off an economic disaster, responsible leaders in Congress should prevent a crisis by ensuring that the ultra-wealthy and rich companies pay their fair share — instead of indulging Republicans’ fantasies of more tax cuts for their rich buddies coupled with spending cuts that will harm every hardworking family in America.

For generations, Republicans in Washington have relentlessly driven up the national debt by shoveling tax breaks to the rich. The cumulative impact has been staggering. In the 1950s, corporations paid 6 percent of the cost of running our country; today, that number has fallen to 1 percent. The 2017 Republican tax cuts were the latest blow — a $1.9 trillion giveaway to wealthy individuals and multinational corporations. And, as icing on the billionaire cake, decades of Republican attacks on the Internal Revenue Service have cut the risk of an audit in half for multimillionaires and corporate tax cheats.

Republicans don’t really care about the national debt. In fact, the first bill that House Republicans advanced would increase budget deficits in order to protect wealthy tax cheats. And new House rules say that additional tax cuts for billionaires and giant corporations don’t need to be paid for. It seems that more debt is fine with Republicans in Congress, so long as it profits the wealthy and well-connected.

But that’s not enough. Republicans have committed to vote on a MAGA tax plan to slash total taxes for the wealthy and corporations, while hiking overall rates for everyone else. The Republicans’ 30 percent national sales tax will increase the cost of everything that families need, from food to diapers to gasoline — a hard punch in the gut for families already living on a budget.

Even after hiking taxes on millions of Americans, Republican schemes would not reduce the national debt. But that’s no surprise. Republicans’ one unifying principle is government help for their rich donors and economic pain for everyone else. In 2011, they got their way. After nearly a decade of reckless Bush tax cuts, they manufactured another debt ceiling crisis, which they then leveraged to push through a massive austerity program.

Those GOP budget cuts cost the US economy more than 7 million jobs, delayed our recovery from the Great Recession by years, and helped set the stage for Donald Trump’s election in 2016. And just to drive the point home, Trump already blames Republicans’ poor showing in the midterms on people not feeling “the full gravity of the pain our nation is going through’’ — and expressing confidence that by 2024 it will be “much worse.’’ For Trump and MAGA Republicans, pain is the point.

To help Trump win again, McCarthy has declared that he will run the same play again: He will refuse to increase the debt limit until Democrats agree to cruel cuts to programs like Social Security and Medicare.

Here’s the ultimate irony of today’s Republican scam: Without years of Republican handouts to the wealthy, there would be no debt ceiling hostage to take. If Republicans hadn’t spent nearly $2 trillion on the Trump tax cuts and abetted wealthy tax cheats by starving the IRS for a decade, the United States wouldn’t need to raise the debt ceiling this year. In fact, the current debt ceiling would have sustained federal spending well past the end of President Biden’s first term. Any debt crisis today should be laid squarely at the feet of the Republicans who worked tirelessly to help the wealthiest Americans avoid paying taxes.

Serious conversations about reducing the national debt should start here: Repeal the 2017 Trump tax giveaways to the wealthy. Let’s close that door before the next $1 trillion slips away.

Second, stitch up the last-minute loopholes punched in the 15 percent minimum tax on tax-dodging, billion-dollar corporations and give extra bite to taxes on corporate stock buybacks designed to goose up CEO pay. That’s another $100 billion plus.

Fourth, ask billionaires to pay taxes on their growing piles of wealth. Biden’s tax on billionaires is a good place to start and raises over $300 billion in revenue.

Finally, say no to the ridiculous and unpopular Republican schemes to increase our national debt. Don’t gut the IRS or make Trump-era tax cuts permanent or cancel all taxes on the wealthy and corporations while loading up American families with a 30 percent sales tax on everything from milk to auto repairs.

Common-sense changes in tax laws would strengthen our national balance sheet and, at the same time, reflect our values. They are also political no-brainers. The American people don’t support plunging the economy into a manufactured crisis. They don’t support cuts to vital programs so the wealthy can avoid paying their share. And they don’t support enduring brutal austerity to advance Trump’s and MAGA Republicans’ political fortunes.

Democrats need to stiffen their spines and say enough is enough. Every lawmaker should flat out refuse to cut a single dollar of support for hardworking families and small businesses while billionaire corporations and the ultra-wealthy escape paying taxes. If Republicans actually care about the national debt, they can do what generations of politicians have refused to do — finally agree that billionaires and giant corporations should pitch in just like everyone else.

Elizabeth Warren is a US senator from Massachusetts.