There’s no reasoning with a GOP hijacked by disinformation 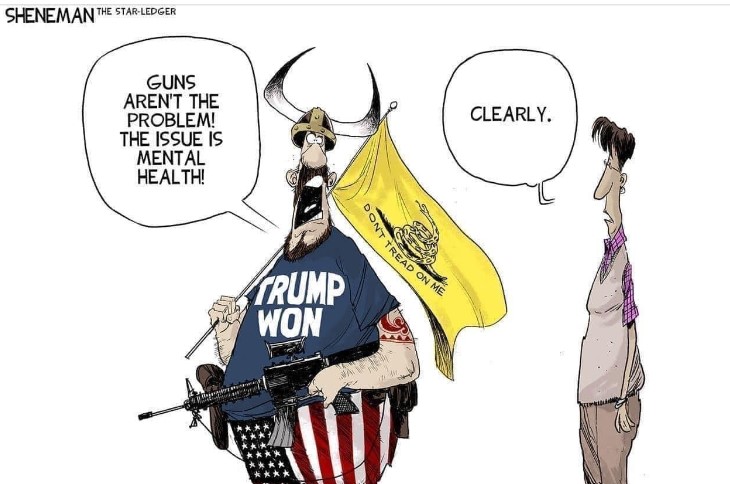 Once you’ve taken leave from the reality-based community, every day is fantastic!

It has been particularly so over the past week. As the rest of the country mourned the latest young victims of gun violence, the QAnon crowd and their enablers in the Republican Party have constructed a walled fortress of alternative facts.

Beginning in the hours after the elementary school massacre in Uvalde, Tex., right-wing social media churned out every manner of conspiracy theory: The shooter was an illegal immigrant! No, he was transgender! Or maybe the massacre was a false-flag operation perpetrated by the anti-gun left! And the grieving families are paid crisis actors!

The disinformation then followed the usual paths, finding its way to Alex Jones’s Infowars (the shooting had “very suspicious timing,” coming days before the National Rifle Association’s convention) and right into the claims of Republican members of Congress.

Rep. Paul Gosar (Ariz.), who has repeatedly tied himself to white nationalists, tweeted that the gunman was “a transsexual leftist illegal alien” — and let that multi-headed falsehood stand for two hours before deleting it.

On Fox Business, Sen. Ron Johnson, a Wisconsin Republican and prominent advocate of Ivermectin dewormer as a covid-19 therapy, blamed the shooting on critical race theory. “We stopped teaching values in so many of our schools; now we’re teaching wokeness,” he said. “We’re indoctrinating our children with things like CRT, telling, you know, some children they’re not equal to others and they’re the cause of other people’s problems.” Reminded by host Neil Cavuto that school shootings were happening long before CRT became a (Republican-invented) issue, Johnson added the claim that CRT was “going on under the radar for quite some time.”

Then came the ubiquitous Rep. Marjorie Taylor Greene (R-Ga.), who, fresh from a GOP primary victory, repeated in a live Facebook broadcast the false narrative that the perpetrator was trans (“wearing eyeliner, cross-dressing”). She also nodded to the conspiracy belief that the shooter couldn’t have afforded the weapons and therefore anti-gun forces must have given him the guns to create a pretext for gun confiscation. “He must have really been saving up,” she said.

At the NRA convention, some of the most prominent Republican officials posited yet another conspiracy theory: that for political figures calling for sensible gun control, “their real goal is disarming America,” as Sen. Ted Cruz (R-Tex.) put it in a speech stocked with falsehoods. Former president Donald Trump falsely told the group that the Biden administration reportedly “is considering putting U.N. bureaucrats in charge of your Second Amendment rights.”

A new study shows how distorting disinformation has become on the political right in the Trump era. Brian Guay of the Massachusetts Institute of Technology and others set out to learn why, as previous studies of social media patterns have found, Republicans share between 200 percent and 500 percent more fake news (fabrications published by sites masquerading as news outlets) than Democrats. Were they less able to distinguish fact from fiction? More psychologically predisposed to political bias?

In part, yes. But the researchers found that “the issue primarily seems to be a supply issue,” Guay told me. “There’s just way more fake news on the right than the left.” In experiments giving Democrats and Republicans equal amounts of fake news that confirmed their world views, Republicans were more likely to share the falsehoods — but only 1.6 times more likely. This suggests that Republicans don’t have some “overreaching hunger” to traffic in untruths; they simply can’t avoid it because they’re so immersed in the stuff.

Guay’s is the latest of many studies identifying the disinformation “asymmetry” afflicting the right in the Trump era. In lay terms: Garbage in, garbage out. Republican voters hear lies by the thousand from Trump and imitators such as Johnson and Cruz. They hear new conspiracy theories daily from Fox News’s Tucker Carlson and other Trump-inspired elites. It’s hardly surprising that, thus exposed, they become more toxic in their language, more extreme in their ideology and more outraged.

If you saw “evidence” everywhere you turned, from people you trusted, that the country is being run by socialist pedophiles bent on disarming the populace, extinguishing your race and destroying the United States, you’d probably be outraged, too. At the very least, you might not be in the best frame of mind for a constructive conversation about ending gun violence.

Facebook
Twitter
Email
PrevPreviousDeSoto Commissioners need more details from Mosaic
NextMedicare and Social Security have strengthened under Biden and Democrats, but the GOP has a plan that could end guaranteeNext