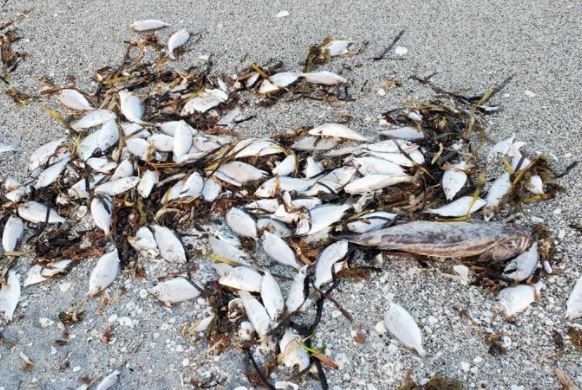 “The fish were coming in steady streams, and you could smell them already in the parking lot,” said Jean Ranallo in an email Sunday morning. She regularly heads to the public Manasota Key for sunrise swims but skipped that swim Sunday.

“Tons of dead fish coming in now,” Bass reported in an email accompanied with photographs of dead fish along the shoreline of Manasota Key. “Grouper, trout, snapper, lots of eels, and some oddball fish.”

South of the county line at Englewood Beach, the reports Sunday were the same.

“(Charlotte County) was at the beach all morning removing dead fish and seaweed,” Mark Timchula posted on his Facebook page Sunday.

Timchula is better known as the “Beach Guy” for his beach umbrella and chair rentals at the public beach. Timchula also reported, “water very dark and the occasional red tide smell in the air.”

On Knight and Don Pedro islands, south of Stump Pass, Brenda Bossman, who is the permit holder overseeing sea turtle patrols, said the islands saw fish washing onto the shore. She detected red tide in the air and experienced light coughing as she walked north, towards Stump Pass.

Lee and Collier counties were spared of similar intensities of red tide Sunday, according to Mote’s reports.