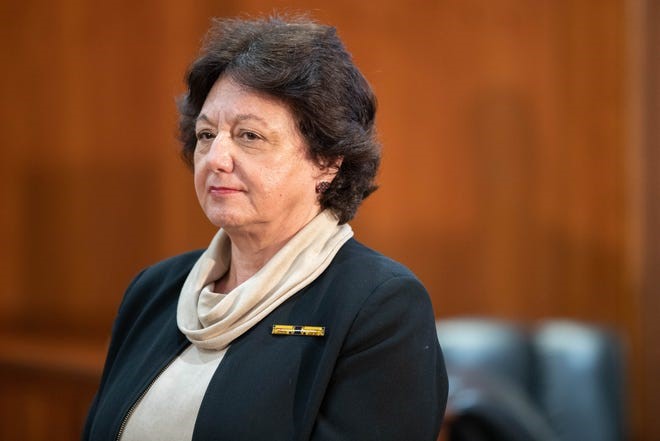 A top Republican in the Florida Senate said Monday that she opposes some elements of the new Texas law that criminalizes abortion after a fetal heartbeat can be detected and allows almost anyone to sue an abortion provider over an alleged violation.

The comments by Sen. Kathleen Passidomo to Sarasota’s Argus Foundation indicate that a Texas-style law could have a tough time advancing in Florida without some revisions.

Passidomo, a Naples attorney, is in line to become Senate president, making her one of the most powerful lawmakers in the state.

The controversial Texas legislation bans abortion at around six weeks of pregnancy, instead of roughly 24 weeks under current Florida law. And the Texas measure relies on citizens to enforce the law, stipulating that individuals must be awarded at least $10,000 in addition to costs and attorneys’ fees for every successful lawsuit against an abortion provider.

“I am pro-life but I am not pro telling on your neighbors,” Passidomo told the Argus Foundation crowd gathered at Michael’s on East, adding that she is “uncomfortable with that language” allowing citizen enforcement.

Passidomo said in an interview with the Herald-Tribune after the event that she does favor banning abortions after a fetal heartbeat can be detected.

“From my understanding, and a cursory review of the Texas law, you can break it down into two parts, one is the so-called fetal heartbeat provisions and I do support those provisions because I am pro-life,” she said.

But Passidomo reiterated her opposition to the citizen enforcement measure in the Texas bill.

“I do have concerns with the neighbor versus neighbor,” she said, adding: “That’s very troubling.”

“I think it’s worthwhile to take a look at the Texas law and see if there is more we can do here in Florida,” Simpson said in a statement.

Passidomo’s remarks Monday also touched on the state’s COVID-19 response and legislation aimed at preventing another condominium collapse after the Surfside tragedy.

“Our state is so polarized over this issue, whether to mask or not mask, whether to vaccine or not vaccine,” Passidomo said of COVID-19.

The senator added that polling “we’ve done” shows Floridians are split “about 50/50” on how to respond to COVID-19.

Asked after the event if there is any COVID-19 legislation she feels is necessary, Passidomo said “not at this point.”

Gov. Ron DeSantis has been battling with school districts over whether they can impose mask mandates. Whether the Legislature weighs in on the school mask debate “depends on the status of the virus when we get to session,” Passidomo said.

DeSantis on Monday said the state would fine local governments that require employees to get a COVID-19 vaccine. The governor cited a state law passed this year that prohibits government agencies and businesses from mandating that individuals prove they are vaccinated “to gain access to, entry upon, or service.”

“We are not going to let people be fired because of a vaccine mandate,” DeSantis said.

That law, SB 2006, prohibits so-called vaccine passports, but DeSantis also is relying on it to fight vaccine mandates by government employers.

Passidomo said in an interview that “maybe that’s an interpretation” of the law.

“I haven’t seen what the governor’s thoughts are on it,” she added.

In discussing the idea of vaccine mandates, Passidomo shifted the focus to businesses.

“With regards to businesses, we’re a right-to-work state so I think businesses should have the ability to operate, I would not support restrictions on the businesses’ right to operate,” she said.

Asked if that extends to a business’s right to mandate employees be vaccinated, Passidomo said: “Again it’s a right-to-work state.”

Sarasota County Commissioner Nancy Detert, a former state senator, asked Passidomo about how the Legislature will respond to the condominium collapse in Surfside.

Passidomo said changes to condominium law are being discussed. She is cautious about being too aggressive with reforms.

“Here’s what happens with the Legislature, we always do these knee-jerk reactions, unfortunately, that’s how we roll. We don’t want to go too far, but we don’t want to go not far enough,” she said. “So again we have to come up with common-sense solutions here.”

“It will happen, it will be discussed,” she added. “I just hope we don’t go way too far because we tend to do that.”