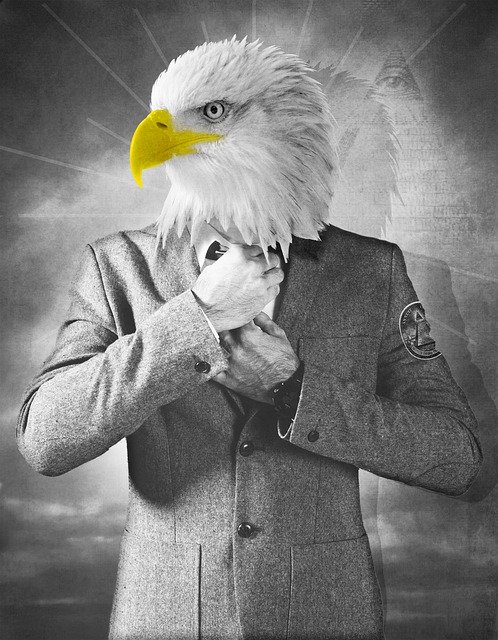 President Trump, his son and top members of his campaign on Wednesday advanced a set of unfounded conspiracy theories about the vote-tallying process to claim that Democrats were rigging the final count.

Eric Trump tweeted a video, first pushed out by an account associated with the far-right QAnon conspiracy theory, that purported to show someone burning ballots cast for his father. The materials turned out to be sample ballots, and Twitter quickly suspended the original account that circulated the misleading clip.

Trump’s son and others, including White House press secretary Kayleigh McEnany, claimed falsely in tweets later hidden by warning labels that the president had won Pennsylvania — even though no such determination had been made. And the campaign’s spokesman, Tim Murtaugh, claimed without evidence that crowd control at a processing center in Detroit was an effort to thwart Trump’s chances of reelection.

The misleading messages came as states continued to count mail-in ballots that appeared to favor former vice president Joe Biden. The Trump campaign’s quest to sow doubt about the tabulation process went hand-in-hand with its pursuit of a flurry of legal actions seeking to halt the counting and its tacit endorsement of protests from Philadelphia to Detroit aiming to “stop the steal.”

“They’ve shifted their tactics, after months-long attacks on voting by mail, to saying that the voting process and the vote-tallying process is rigged,” said Joan Donovan, director of the Technology and Social Change Research Project at Harvard’s Shorenstein Center on Media, Politics and Public Policy. “They are priming the public, and laying the groundwork for legal challenges to mail-in voting and to the voting processes.”

Social media companies raced to apply labels to the misleading posts, with Facebook in most cases appending a notice that the count was still underway. Twitter applied more stringent standards, hiding some of the claims behind warning labels and restricting the reach of the tweets — but those actions often came only after the messaging had already been shared widely.

In all, Twitter appended labels and warnings to at least eight tweets sent or shared by either the president’s account or his campaign’s official account, Team Trump, in what provided a visual signal of the volume of misinformation emanating from their feeds.

Some of those tweets ran afoul of rules prohibiting manipulated media; others called the state in Trump’s favor before an official result had been announced. Twitter cited data from researchers at the Election Integrity Partnership to show its actions had reduced the reach of some of Trump’s prior attacks on mail-in voting. Still, tweets from the president that Twitter had labeled around Election Day had been shared more than 156,000 times by Wednesday evening, the site’s publicly available sharing figures show.

“Our teams continue to monitor tweets that attempt to spread misleading information about voting, accounts engaged in spammy behavior, and tweets that make premature or inaccurate claims about election results,” Twitter spokesman Brandon Borrman said in a statement. “We remain vigilant and will continue working to protect the integrity of the election conversation on Twitter.”

The tweets from Trump and his family members reverberated quickly and widely among far-right communities. After Eric Trump shared the fake video showing the desecration of pro-Trump ballots, a user on the messaging app Telegram leaped to action: “Please can everyone retweet this,” he said.

On Facebook, meanwhile, all nine of Trump’s posts were tagged with extra-information boxes disputing or adding context to his claims. Facebook did not immediately respond to a request for comment.

Sen. Mark R. Warner of Virginia, the top Democrat on the Senate Intelligence Committee, said the torrent of questionable tweets from Trump and his associates showed that the guardrails set up by Silicon Valley were insufficient.

“With every policy the platforms belatedly announce, we’ve continued to see Trump and his allies flout and circumvent them,” he said in a statement. “The consequences here are dire: As the President and his campaign grow more desperate, they are willing to spread even more inflammatory and dangerous falsehoods, with the very real possibility of prompting violence.”

Murtaugh, the Trump campaign spokesman, defended his tweet raising suspicions about tabulation in Detroit, asking, “What are they trying to hide?”

Efforts to create the impression of widespread fraud and miscounts conflicted with the assessment of the Trump administration’s own officials. Chris Krebs, director of the Department of Homeland Security’s Cybersecurity and Infrastructure Security Agency, in a statement on Wednesday hailed the “hard work of state and local election officials and private sector partners who have focused efforts on enhancing the security and resilience of elections.”

Social media was not the only channel Trump and his campaign used to reach potential supporters as the ballot counting continued. The campaign bombarded Americans’ smartphones with an estimated 9 million text messages from midnight to midday Wednesday, according to data compiled by RoboKiller, a call-blocking app. Some of the texts accused Democrats of trying to steal the election while asking recipients to donate to help pay for the president’s coming legal efforts to challenge the results, the data shows.

“I need you to defend America! We can’t let Dems undermine our election,” read one of the campaign’s texts, which included a link to a Web page where recipients could donate to help the president “FIGHT BACK!”

Trump’s conservative allies similarly turned to text messages to seek support. The pro-Trump group FreedomWorks encouraged people to donate and join their so-called Election Protection Force. Late Tuesday, Florida Rep. Matt Gaetz — one of Trump’s most vocal defenders — also sent a text alleging that left-leaning groups were planning disruptions if Democrats did not win, according to a copy shared by RoboKiller. FreedomWorks confirmed the message; Gaetz did not respond to a request for comment.

In Philadelphia, where ballot tabulations are continuing, accusations leveled on Twitter did not yield formal reports to authorities, said Jane Roh, a spokeswoman for the Philadelphia district attorney’s office, “which arguably raises questions about the actual intent of these posts.”

After Fox News stepped out ahead of other networks in calling Arizona for Biden, the Southwestern state similarly became a target of conspiratorial claims of fraud. Katie Hobbs, the secretary of state, took to Twitter to debunk a viral narrative asserting that ballots marked with Sharpie markers were at risk of being thrown out. A wide range of right-wing users, from Fox News contributors to an Arizona congressman, pushed the claim, some using the hashtag #sharpiegate.

Facebook took steps to limit the Sharpiegate story Wednesday, including blocking the Sharpiegate hashtag, and applying labels and reducing the reach of the original misleading story, according to company communications reviewed by The Washington Post.

Other efforts that sought to mislead the public about election results gained less traction. Twitter permanently suspended several accounts that impersonated the Associated Press, which for many media organizations is the primary source for calling state results. The accounts, which at times prematurely or falsely called election results, violated Twitter’s rules against attempts to “portray another entity in a misleading or deceptive manner” but did not appear to be part of an especially sophisticated or well-disguised operation.

The Feds earmarked $15 billion for FL schools to help kids in the pandemic, but it’s largely an unused stockpile

Why Do Republicans Hate Cops?