Trump blew an obvious shot at a second term 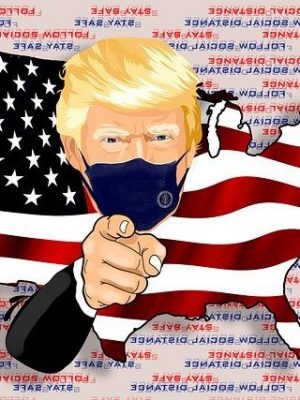 Donald J. Trump is not as smart as he and his base think he is. Trump; the businessman who wrote, The Art of the Deal, and convinced a sizable percentage of the electorate that he “alone could fix it”. Trump; the president who has politicized, weaponized, or monetized every part of American society, shredded our social decency (such as it was) and split up families. He completely blew his chance to curb the virus, make a fortune, be a hero, and win in November.

Instead of politicizing then weaponizing masks, as he did, an astute Trump would have politicized and then monetized masks. He could have branded MAGA Masks and decreed a mandatory mask order and hawked them at daily infomercials. His base would have bought them by the case and worn them faithfully. His most staunch cultists may have even brandished weapons at non-mask wearers – thereafter gaining a speaking part at the GOP convention. Since the emoluments clause clearly does not apply to him, he could have made a fortune. An even smarter Trump would have seen the “hero” and “patriotic” value in invoking the Defense Production Act to make masks at factories in red states.

Democrats would not have politicized masks.  We would have worn them whether Trump thought it was a good idea or not; although no self-respecting Democrat would have been caught dead in a MAGA mask.

Then after flattening the curve with the shutdown in March and April, our economy would have reopened with widespread mask use.  Shored up by massive federal stimulus, Main Street would not be in tatters. Since we now know that masks work well, Trump would be hailed for managing the pandemic even if all he had really tried to do was make a buck. Even if he still had blown it on tests and PPE, there is a good chance he would have been reelected.

Instead, he hawked hydroxychloroquine, not because he had a financial motive (although the New York Times reported that he owns stock in a company that makes a name brand version), but because he listened to the wrong people.  Trump operates viscerally. He has no strategic plan. This is what his base likes about him.  But they think he is smart and has good instincts. He isn’t and he doesn’t. His contempt for experts led him to choose the wrong option at every juncture. And now we are still broken.

There is still no plan to curb the virus to a point we can safely open schools full time. Without critical childcare function schools play, we cannot fully reopen the economy.  Take action to defeat him. Promote the Charlotte County Democrats website. Follow and like us on Facebook. Text VOTE to 30330 for information on your own plan to vote.