Trump, GOP are lying about Vote By Mail 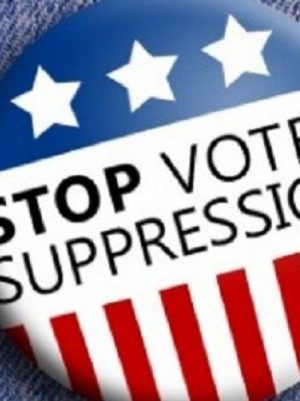 “They had levels of voting that if you ever agreed to it, you’d never have a Republican elected in this country again”, Donald Trump, “Fox and Friends”, March 30, 2020

White men of means have been suppressing the vote before the ink was dry on the Constitution. The requirement to own property kept most men from voting for almost 100 years (a mere 6% of the population elected George Washington). In 1868, freed male slaves were granted citizenship, but determining who has the right to vote was left to the states and Jim Crow laws put significant roadblocks, including literacy tests and poll taxes, in the way. The 19th amendment in 1920 granted white women the right to vote, but it wasn’t until the Voting Rights Act of 1965 that black women were fully enfranchised. As an important aside: Black women vote at higher rates than any other voting bloc.

We proudly claim that in our democracy every vote matters, but numerous barriers placed in the way prove that not everybody means that. And by “not everybody”, I mean Republican legislators. Gerrymandering, strict voter ID laws (which block 2 -3% of otherwise eligible voters), fewer polling places, limited early voting and vote-by-mail, voter roll purges (16 million voters purged 2014-16, many illegally), disproportionately affect poorer people and people of color. It looks purposeful because it is. In 2013, protections under the Voting Rights Act were eliminated so that states with awful voter suppression practices were free to resume them. That same year, the US Supreme Court struck down a new NC voter ID law because it ” targeted African Americans with almost surgical precision”. Trump was right when he said that if everybody voted he would lose. Republicans will do anything in their power to suppress the votes of those who vote against them.

Now, in the midst of a pandemic that will likely be worse in November when voters will be reluctant to be in crowds, Trump has mounted an all-out disinformation campaign against voting by mail (VBM). Other than his rabid base and the GOP congress, everyone else smells a rat. Although Trump himself votes by mail, (illegally apparently in 2020), as do most in his immediate circle, he continually makes outrageous claims about fraud of which there is almost none, and the few actual cases involve Republicans. The National Association of Secretaries of State (53% are Republican) issued a statement: “We are not aware of any evidence supporting the claims made by President Trump”. Nonetheless, the Republican National Committee will spend $20M to block efforts to expand VBM. Trump claims falsely that he only lost the popular vote to Clinton because millions purged from voter rolls somehow voted, which is exactly the opposite of true. If you have been purged from the rolls, you can’t vote.

Florida has expanded VBM over the years and it is now available to every voter. In 2018, over 2.6 million Floridians voted by mail, evenly split between Democrats and Republicans. In Charlotte County, Republicans cast 60% of 28K total mail ballots. Strong efforts by the Florida Democratic Party (and 20,000 volunteers) have led to a 302,000 lead in Democrat over Republican VBM requests, including many new voters. This represents great progress in reaching new voters.

The facts of VBM:

* accountability (you can check that your ballot arrives)

We need to ensure that the safeguards that make Florida’s VBM system safe, reliable, and nonpartisan be employed in states with records of voter suppression. The National Association of Secretaries of State has issued guidance for states to safely expand VBM.

In addition to the disinformation campaign about VBM, Trump is also trying to cripple or kill the US Post Office, just in time for the election. Money has plagued the USPS for years, and reduced mail as a result of the shutdown has compounded the problem. Without a bailout, it will run out of money in September. This would be a catastrophe for VBM. The new Postmaster General is a top GOP donor and strong Trump ally. Oh, what could go wrong?

Every poll tells Trump he is in trouble, down to Biden by 14% nationally, including in the battleground states. We cannot let him and his Republican apologists cast doubt on the legitimacy of this election by casting doubt on Vote by Mail, nor we can allow them to force voters into a choice between their very lives and exercising their right to vote.

Now you know the facts of Vote by Mail. Request your VBM ballot from your county supervisor of elections. In Charlotte County, you can enroll for VBM on the SOE website. or call the office, 941-833-5400.

Our democracy is counting on every vote.