Trump may not be a tax fraud, but he is an utter business failure! 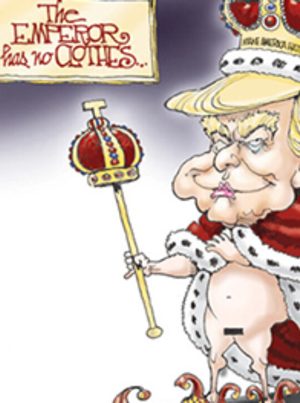 2016 versus 2020: what’s different is, in 2016, we didn’t have adequate financial (tax records) information to judge whether or not the President was a successful businessman. In 2016 he convinced many Americans that he would run the country like his successful businesses, and that’s the most critical reason many voted for him. Now 20 years of income tax data on Donald Trump has been obtained and made public. These records cover 500 business entities, 5,000 business tax returns, and two years of personal tax returns. Arguably, these business tax returns are the essential informaton for judging his success as a businessman. Additionally, we can see his personal and corporate tax returns for his two years in the White House.

The following are excerpts from an interview with Sue Craig and Russ Buettner, the New York Times’ reporters who broke the story on this compilation of financial records. The interview was conducted by Michael Barbaro on his podcast, The Daily, on September 29, 2020.

“What we can see in these documents that we couldn’t see before is that after 1995, he was still recovering from that billion dollars in losses that he accumulated … he was trying to reinvent himself. His casinos were failing again. He would have to come up with $55 million to keep his hand on the casinos.”

After 1995, the reality TV show The Apprentice became his lifeline. “Eventually, that wealth stream, just the money from his fame that requires no business expertise, totals $427 million.”

“Donald Trump, during this period of time, begins expanding very rapidly into golf courses. In some years, he buys three golf courses at one time. He picks up Doral, an iconic golf course in Florida. He buys three golf courses in Ireland and Scotland and invests more money in those courses. And they keep losing even more money after that. And you can see how that starts whittling away. He’s literally having to prop those businesses up with the money he’s making from The Apprentice and the licensing deals.”

The analysis concludes that “the less decision-making authority Donald Trump has on a business, the more money that business is going to make. And the more involved in designing the business and setting it up and creating a business plan, the more likely it is to have trouble.

“The story many people had expected if the President’s tax records were ever disclosed, maybe he hadn’t paid a ton of money because he was very good, as he said, at taxes. But the analysis of these documents reveals that Donald Trump pays little, if any, taxes because he has mismanaged his businesses and racked up enormous losses. He takes profits and turns them into losses at such a vast scale that nothing is left to tax at the end of a year.”

“There’s been so much speculation about why he would refuse to release these returns, why he would refuse to follow these historical precedents that people have jumped to incredible conclusions about the possibility there. But you don’t have to look too far in this. The material that’s in these records is an existential threat to the way Donald Trump sees himself and the way he presents himself to the world.”

“Presenting himself as a great businessman is everything [to him]. And on every line of these records, there’s evidence to the contrary. And I think that’s reason enough to explain why he would fight so desperately to keep them from public view.”

“I’m a successful guy, and I will do what I did at my companies, I’ll do it for this country.” Thanks to these reporters, we now know the truth: 13 business failures and 6 company bankruptcies do not equate to “success”. Unfortunately, his handling of the pandemic and the subsequent consequences to our nation’s health and economy DO equate to what he did at his companies–failure!

So to those hard-working families working paycheck to paycheck, the Emperor has no clothes! If you’d prefer not to have this utter failure for another four years, vote Democrats up and down the ballot! Do it by ‘Vote-by-mail,’ do it by voting early, or do it on November 3. YOU must do it, and YOU must make your vote count! Here’s how YOU do it!