Trying everything, even lettuce, to save Florida’s beloved manatees 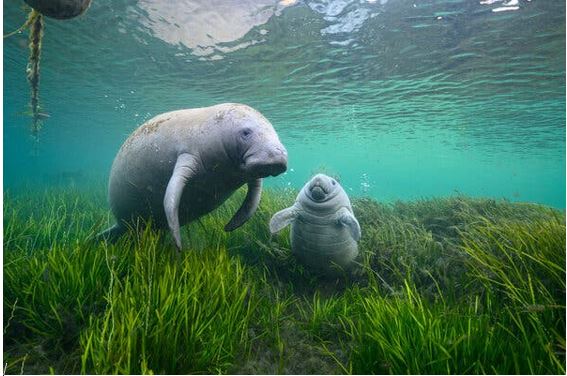 INDIAN RIVER LAGOON, Fla. — At first, the manatees stayed away from the romaine lettuce.

It was an extraordinary experiment in dire times: humans dumping pallets of leafy greens to feed Florida’s beloved manatees in the warm waters of the Indian River Lagoon, where decades of pollution have destroyed their delicate sea grass diet.

Eventually, a pair of bold manatees approached. With their prehensile lips — they are distantly related to elephants — they grabbed the lettuce and nibbled. More followed. On the coldest days, hundreds came, and over the three-month feeding period, the hungry mammals ate every scrap of the 202,000 pounds of lettuce hurled from above.

Floridians cherish manatees, rotund and gentle giants that have long captured the human imagination, but people have failed to care for the animals’ environment, putting the species’ survival at risk. Now, as manatees are disappearing in large numbers, humans are trying crisis rescue measures in desperate attempts to keep them alive.

It may not be enough. The iconic manatee remains in trouble, and with it, a piece of Florida’s identity.

For more than a century, the state has had a contradictory relationship with nature. The Florida lifestyle is synonymous with outdoor pursuits — but also with sprawling development that damaged the natural plumbing of Lake Okeechobee and the Everglades, threatened the drinking water supply and left the state gravely vulnerable to climate change.

Manatees had been something of a success story, their status upgraded to threatened from endangered in 2017 after years of educating boaters to avoid deadly strikes. Starvation has once again put them in peril.

Along Florida’s Atlantic coast, the die-off began last year, after the Indian River Lagoon, a 156-mile estuary that had been a seasonal manatee refuge, turned into a barren underwater desert. Decades of waste from leaky septic tanks and fertilizer runoff from farms and development fueled algal blooms that blocked the sunlight and choked the sea grass that manatees used to eat.

This year’s dip in deaths does not necessarily mean that starvation has eased and feeding has helped. Scientists will spend the summer reviewing environmental conditions, necropsy results and other data to make a more complete assessment, said Dr. Martine de Wit, a veterinarian with the Florida Fish and Wildlife Conservation Commission at its Marine Mammal Pathobiology Lab in St. Petersburg.

“It likely had to do with a later start to winter,” she said of the lower preliminary death toll. “And then we had a relatively short winter. So that may have helped some manatees.”

Floridians share a special affection for manatees. Threatened with extinction, manatees are “adopted” by people who make charitable donations to support their protection. “Save the Manatee” is one of the state’s most popular specialty license plates. Homes display manatee mailboxes.

Small towns like Orange City, home to Blue Spring State Park, hold manatee festivals that draw tourists to places that do not otherwise get many visitors. The most famous is perhaps Crystal River, on Florida’s gulf coast, where people can swim with manatees.

But neither fondness nor economic interest has stopped humans from posing a deadly threat — first from boat strikes, which have long caused manatee deaths, and now from pollution, which has destroyed much of their food supply.

Everyone agrees on the ideal long-term solution: restoring the lagoon habitat through a variety of efforts, from growing and planting new sea grass beds to improving storm water drainage to moving properties on septic tanks to sewer systems. But all of those projects are expensive and will take years. To critics, the feeding program was woefully insufficient — too late and far too limited, both in the amount and type of food provided to the animals.

The outlook is not uniformly bleak. Some lucky manatees spent the winter 70 miles northeast of the Indian River Lagoon. The animals had swum to the gem-toned Blue Spring, about halfway between Orlando and Daytona Beach, where they could escape the cold water and be near the abundant foliage of the St. Johns River.

In Crystal River, on Florida’s gulf coast, people can swim with manatees.

Sea grass, seen here in Crystal River, is growing again after being replanted. But on along the Atlantic coast, decades of waste from leaky septic tanks and fertilizer runoff fueled algal blooms that killed much of the manatees’ food supply.

The next day at Blue Spring, Wayne Hartley, a jolly 78-year-old manatee specialist with the Save the Manatee Club, set out to count the animals, as he has done since 1980. When he started, 36 manatees wintered at the spring. This year, the season high was 871, a record — and a testament to how some preservation efforts have worked.

Mr. Hartley hopes something else is going on, too: Perhaps manatees that would normally seek refuge in the Indian River Lagoon are trying to adapt to sea grass loss by traveling elsewhere.

“They go back to the East Coast and they’re like, ‘This place is rotten — I’m going back to Blue Spring,’” he said.

Clutching a small notebook, he paddled his canoe along the crystalline spring waters. Each time he spotted a manatee, he marked its presence in black felt-tip pen. Often, he greeted the sea cows by name.

“Oh, it’s Precious. Big female. Blue Spring 140,” he said, identifying her by her official number, which he knew from memory.

Some manatees frolicked around his canoe, circling in a sort of dance. He keeps a notebook for each winter recording census counts. He went through a Harry Potter naming phase (“Weasley”) and, as a history major, one for English kings (“Egbert”).

With a moment’s glance as he paddled, he identified manatees by the unique scars on their backs and tails left by boat propeller strikes.

“That’s Alice,” he said. “One of those where you wonder why she’s alive. Those scars down her side? Those are huge and so brutal.”

Park regulars visit on cold, misty days, knowing that is when the most manatees seek the spring’s warmth. Even on a Monday morning, a long line of cars snaked down the street to enter the park.

“Have you seen Annie or Moo Shoo?” a woman asked Mr. Hartley from one of the observation decks inside. (No, but he had seen Lucille.)

“Floyd and Lenny?” a man wanted to know. (Just Whiskers and Nick.)

In the Indian River Lagoon, the turbid brown waters are much less hospitable. The lagoon’s arid bottom, now made up of little more than sand and horseshoe crabs, is a sobering sight.

“I remember when the water was crystal clear, and you could see pastures of sea grass,” said Katrina Shadix, an environmental activist who fished in the lagoon decades ago. “This used to be the most amazing, beautiful estuary. The ecosystem has collapsed.”

Ms. Shadix and Wanda Jones, a marine biologist, rented a pontoon boat frequently during the winter to search the lagoon’s more remote corners for manatees in distress to report to the state’s rescue hotline. Rehabilitation facilities were in such high demand this year that they sent manatees as far away as Ohio to be nursed back to health. Volunteers to staff boat rescues and lift the massive animals using trailers came from as far away as Alaska.

Ms. Shadix and Dr. Jones have urged state wildlife officials to take more dramatic action to save the manatees, including trucking in hydrilla and water hyacinth, invasive aquatic plants that grow in excess along many Florida waterways, and vastly expanding the feeding efforts. (Federal law prohibits unauthorized people from feeding manatees and other wild marine mammals.)

Officials counter that would be too difficult logistically — the limited feeding trial was already a big undertaking — and could introduce unwanted new organisms into the lagoon.

On one of their trips in early March, Dr. Jones steered the boat to a secluded cove on Merritt Island. “This is the manatee graveyard,” Ms. Shadix said.

Manatee carcasses had rotted away there, dumped by officials in 2021 as deaths became overwhelming. The air still smelled putrid. Bones — ribs, vertebrae, some teeth — tufted with green algae remained visible through the shallow water.

This year, most carcasses went to landfills.

For Mr. Hartley in Blue Spring, the hardest days are when state wildlife officials call about a dead manatee and ask him to identify it. This year, that has happened once, in February. He identified the female as Tirma, Blue Spring 775. He had not seen her since 2014.

In 2020, he recalled, he drove to a marina where a man with a tractor hauled a carcass. Mr. Hartley recognized it right away. Amber. Daughter of Ann. Pregnant. Cause of death unknown.

“Amber was a twin with Amanda, and Amber got abandoned,” he said. “So there was a long history.”

He cried after identifying her. His voice caught again when talking about that day.

“Maybe it was just too many times,” he said, “going out and seeing them dead like that.”

Image Credits: A manatee and calf in the Crystal River in Florida in November. Statewide, more than 1,000 of the mammals have died in 2021, a record. Credit…Jason Gulley/NY Times