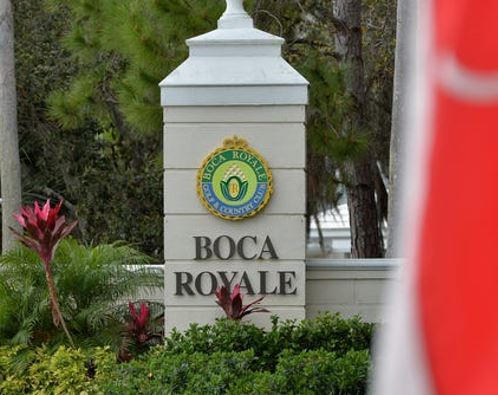 Editor’s note: Charlotte Dems helped blow the whistle on this latest version of DeSantis political favoritism after he scheduled a pop up clinic at Kings Gate, a gated community and Republican stronghold in Port Charlotte.

The Palmer Ranch community in Sarasota County encompasses 9,000 acres in the developed portion west of Interstate 75, and more than 14,000 housing units.

It is one of the largest and best-known developments in the region, and well-established after nearly four decades in existence. It attracts national builders such as DiVosta, Pulte and Lennar.

Palmer Ranch developer Hugh Culverhouse estimates that around 30,000 people are living there, if you assume 2.2 people for every dwelling unit. The majority of residents probably are over age 65 and would qualify for the COVID-19 vaccine, he said.

“DeSantis sure as hell didn’t call me,” Culverhouse said, and he has a theory why.

Unlike Lakewood Ranch-based developer Pat Neal, who was tapped by DeSantis to help coordinate a vaccine pop-up clinic in Charlotte County, Culverhouse hasn’t donated to DeSantis and didn’t serve on his transition team.

Neal ended up giving special access to the vaccine to residents of three developments where he builds homes, including two Neal Communities developments in Sarasota County, and at least four other developments that don’t appear to be directly tied to him, allowing the residents of these developments to bypass countywide vaccine registration systems that give people a place in line based on when they sign up.

Culverhouse believes DeSantis tapped Neal to spearhead the vaccine clinic as political payback, and Neal leveraged his political connections to get an unfair benefit for his communities, allowing them to skip ahead for the vaccine.

Neal Communities spokeswoman Leisa Weintraub said in an email last week that: “We are happy and proud to aid the state and support the Governor’s mission to vaccinate seniors in Florida.”

DeSantis spokeswoman Meredith Beatrice defended the 15 vaccine pop-up clinics that have been targeted to senior communities in a statement last week, saying the “insinuation” that they “are established for political purposes is completely baseless.”

“Nine of the state’s 15 (clinics) for senior living communities have been established in Broward and Palm Beach, which are not known for being Republican strongholds,” Beatrice wrote.

But the questions about vaccine favoritism aren’t going away. They’re coming from people such as Culverhouse who argue that the governor is conferring an unfair competitive advantage on other developers by giving them access to the vaccine, and they’re coming from senior citizens who are still waiting in line to get the shot and resent seeing people skip ahead.

The revelation that Neal gave special access to the vaccine to two of his upscale communities, Grand Palm in Venice and Boca Royale Golf & Country Club in Englewood, generated a strong reaction from some Southwest Florida residents still waiting to get the shot, and who weren’t part of the select group invited to participate in the pop-up clinic Neal organized.

Even some who were invited decided against participating.

“My husband and I despise Neal and so did not make any effort to sign up,” wrote Rebecca Leas, who lives in Grand Palm.

Leas made it clear that people are acutely aware of their place in line and are monitoring the vaccination process closely.

When people know their place in line and eagerly are anticipating their number being called, hearing about others who got to skip ahead is bound to make them upset. If it’s perceived that people were able to jump ahead in line because they live in a community built by someone with political connections, that only adds to the perception that the process isn’t fair.

In an email with the subject line “skipping the line,” Eisgrau mentioned his number in Sarasota County’s vaccine registration system and said he doesn’t “know when I’ll get mine.” He later followed up and said his vaccine appointment has been scheduled for Monday, more than two weeks after Boca Royale residents were able to get vaccinated.

Allan Thompson wrote that a 91-year-old friend has anxiously been waiting for the vaccine.

“We signed her up for the Manatee lottery and for Sarasota numerical systems,” Thompson wrote, adding: “My wife called the health department and was told everyone is being taken strictly in numerical order and could not say when our friend would be called to go for a vaccine.”

When people have been told by health officials that “everyone is being taken strictly in numerical order” and the find out that some have been allowed to skip in line, it can be upsetting.

“Our Governor is a disgrace,” Thompson wrote.

Culverhouse has a suggestion for DeSantis if he wants to avoid accusations of political favoritism with his next pop-up clinic.

“Call me,” Culverhouse said. “I’ll have the spaces open to you within a day and don’t worry, I’m not going to donate to you so we won’t have bad press because I’m not going to give you any money. Nobody will say there’s favoritism because I don’t even like you, can’t stand you, so it would be fair, it would be equitable … and nobody would say you’ve been bought and paid for.”

More stories from the Sarasota Herald-Tribune

Another upscale Florida community got special vaccine access; this one has a splash park