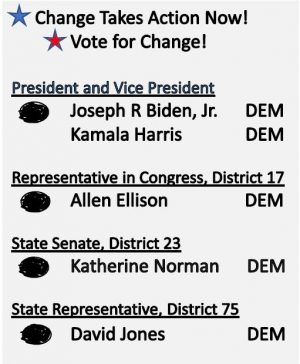 Clerk of the Court – no opinion

For the Supreme Court Judges and the District Court of Appeals – all judges are running to be retained.  They were all appointed by Republican Governors and if, not retained, Governor DeSantis would appoint their replacements – no opinion

Amendment 1 – Citizenship Requirement to Vote in Florida  – NO

The constitution already states that only US citizens can vote.

While allowing all voters to vote for governor, cabinet and legislature sounds good, this change could allow for the top two vote-getting candidates in the primary election to be of the same political party.  Those two candidates would then face off in the general election.

It would require any constitutional amendment to be approved in two elections with 60% of the electorate’s approval each time.  The goal is to make it too expensive for citizens to change the constitution.

It would increase the time residents have to transfer Homestead tax benefits from 2 to 3 years. However, if passed it would reduce property tax revenue.

It would provide Homestead property tax discounts for deceased veterans with combat-related disabilities and would carry over to a veteran’s surviving spouse.

This tax has been in effect since 1994 and has provided many benefits to our citizens.  The money from this tax paid for the new library in Punta Gorda, sewer-related systems, parks and boat ramps.