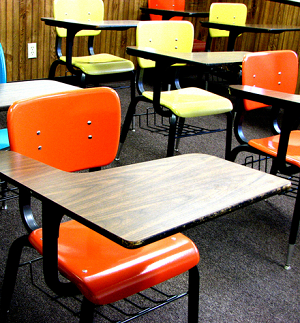 Monitoring the news from afar during my unanticipated but compulsory month-long sabbatical from Florida* allowed me an outsider’s perspective on the state of our state. Even from a distance it was impossible not to feel stunned by the escalating attack on public education as we move toward the Aug. 23 School Board elections.

The devaluing of our educators and our foundational educational principles left me wondering if my hiatus from home was intended to make me reconsider the wisdom of returning at all. Did I really want to live in a state determined to undermine the very system that launched me successfully in life and instilled the values of civic responsibility I still hold today?

First there was a report on the Moms for Liberty gathering in Tampa (otherwise known as the Joyful Warriors summit; so this is a war?), which starkly defined the fears of parents who’ve concluded public schools are not only failing their children, but intentionally conspiring to brainwash and indoctrinate them.

The mostly-mothers at the summit expressed their conviction that a left-wing conspiracy exists to lure their children into thinking they are transgender or queer, to sew racial division and hatred and to denigrate morality and patriotism. Nothing was offered in the way of evidence for this, but substantiation apparently isn’t required when you have the endorsement of elected officials happy to stoke the culture wars for political gain.

Next came news that Gov. Ron DeSantis was granting veterans the right to teach in Florida’s public schools without training or certification, his solution for solving the state’s current teacher shortage. (A shortage, I might suggest, driven in part by his agenda to stifle educators, curriculums and classroom conversations.)

I have nothing but gratitude for those who have served our country and am certainly in favor of providing them with ample workforce opportunities. But where is the evidence to show they have the skills required for classroom instruction or how this might affect teaching standards and student outcomes?

We’d never allow someone to practice medicine or law without a degree; why should the teaching profession be any less respected? I have a master’s degree in journalism and 45 years of writing under my belt. But if you asked me to take over a third-grade classroom tomorrow, I’d be the first to call myself unqualified.

The next salvo was a civil lawsuit filed last week seeking removal of a list of books from Sarasota County Schools and a grand jury investigation into allegation of criminal violations by the SCS Superintendent and members of the School Board. Though there are well-established mechanisms for objecting to controversial school materials, recent legislation (like the Parental Rights in Education Act) has left the door wide open for exactly this type of litigious approach.

Finally came a Florida Department of Education memo this week advising school districts statewide to defy federal rules and guidelines regarding sex discrimination protections for LGBTQ individuals because they “impose a sexual ideology” and should not be considered “governing law.” So now the state is encouraging defiance of federal law in the name of parental freedom?

What is at risk by allowing such discrimination, book banning, curtailing of First Amendment rights, curating of what is “appropriate” to teach and blurring of the line between church and state is not only our longstanding public education system, but the future of our nation.

Preparing people for democratic citizenship was the thrust behind the creation of government-funded schools in the first place; a public investment in education was seen as benefitting the whole country by transforming children into literate, moral and productive citizens. Advocates saw universal education as a means to reduce poverty, crime and other social problems – and to promote cohesion across economic and social classes and to improve social outcomes.

Indeed, the process of establishing public schools itself became an exercise in community building, as people came together to construct, fund and run local schools and invest in seeing students thrive. Schools became a community core where residents could gather for meetings, entertainment and discussion.

Public education has faced considerable past hurdles, including racial discrimination, unequal access and the need to serve specialized populations, like immigrants or those with disabilities. Yet despite the constant raising of the bar, public schools have done a remarkable job of meeting the continually escalating demands of a more complex society and technological age.

As economic, familial and societal challenges have escalated, schools have played instrumental roles in providing oversight and strengthening the social fabric. They have adapted and evolved to meet an ever-expanding mission to develop well-informed, well-adjusted and productive citizens – despite the perils of social media, partisan politics and parental overreach.

If there is a better, more equitable or impartial system of educating the masses than public schools, I’ve yet to see it. Treating children as chattel, institutionalizing bias and squelching access to facts in an attempt to constrict opinions, behaviors and values is not only disrespectful, it’s a surefire way to undermine our democracy.

*My gratitude to the many readers who reached out with good wishes, encouragement and offers of assistance after learning of my recent health scare. I have returned to Sarasota and continue to receive treatment. Your appreciation and encouragement reaffirm my commitment to make this column a place that promotes a shared humanity over a partisan playbook, understanding and empathy over attack and bias, and common sense over nonsense.